David Hockney loves using the Brushes App on the iPad and iPhone, he likes it to painting on a sheet of glass. While you can easily overdraw on a piece of paper, you can’t on a piece of glass. To the lessening in popularity of the method of drawing in art, David Hockney remarks how ironic it is that the phone is bringing back the popularity of drawing. The artist has always been into trees, he finds each tree to be like an individual person – all the leaves are different, all the snowflakes that land on it are different. Trees rise up like the columns of an open, sunlit Gothic cathedral. You feel like you could face-plant into the fluffy, flower-covered mountainsides. 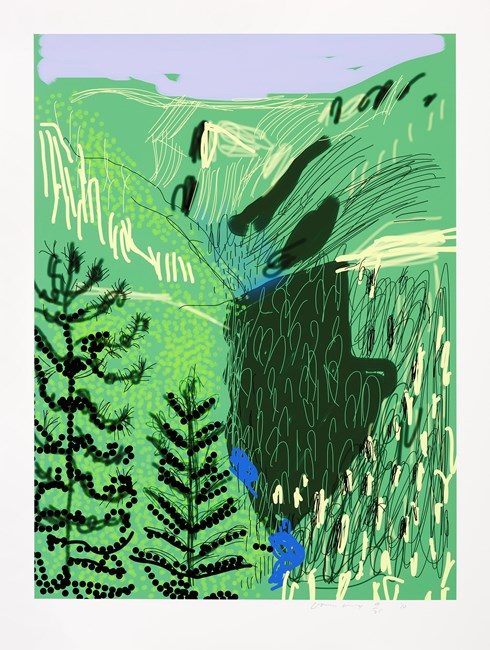 The Los Angeles-based visual artist visited Yosemite in 2010 and 2011. Instead of an easel or medium-format camera, he brought his iPad along. The digital drawings he created using the software Brushes have been reproduced as large prints for display, four of them stretching to nearly eight feet in height. The works from The Yosemite Suite immerse the visitor into Hockney’s vision of Yosemite. It’s a vision that is at once sunny and riotously colorful. David Hockney loves joy and thinks that pictures can be very joyful.

Over the course of his long career, Hockney has embraced all sorts of technologies, from Polaroid photographs to fax machines. Yet his work always remains rooted in painting. The technology is not the end in itself, but rather, a tool. With Yosemite Suite, Baxter says, Hockney responds to the park with an Impressionist’s eye and then translates it to the iPad. The artist translates the language of the landscape into his own patois of color, line, and texture. He takes what could be seen as these postcard views, and turns them into something that you want to contemplate and think about.

Hockney is a master of texture, regardless of whether the work is produced with paint and brushes or a finger on a screen. Dots, lines, scribbles, are used to mimic texture. He’s studied artists like Matisse and Picasso quite thoroughly, and you can see those influences in his work and especially in The Yosemite Suite. 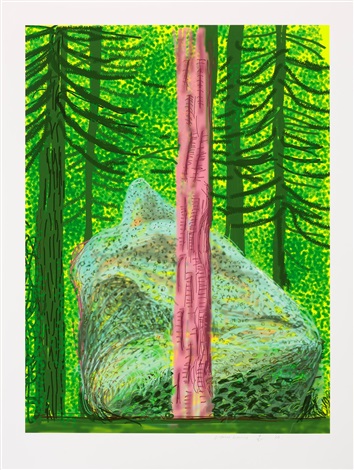 Hockney comes from a long line of artists inspired by Yosemite. But relatively few artists are drawn to the park these days. Yosemite lost the intellectual excitement that it once held to many painters, probably due to how well Yosemite is known and how often it has been depicted. Maybe also because no one had an idea of how to do it differently. How to deal with those impossibly grand views and angles of monumental granite. Hockney clearly isn’t intimidated by Yosemite. He’s not afraid to play with places that are very familiar to us.

Hockney‘s application of iPad painting to one of the nation’s most iconic landmarks ultimately recalls John Muir’s description of the park in The Yosemite: “From the eastern boundary of this vast golden flower-bed rose the mighty Sierra, miles in height, and so gloriously colored and so radiant, it seemed not clothed with light but wholly composed of it, like the wall of some celestial city.” According to David Hockney, all art that is alive, that is speaking to you now, is contemporary. It’s always now.