Diamond Dust is a glittering material that can be applied to paper and ink in the silkscreen printing process, establishing and generating a textured, elaborate, and radiant finish. It has been extensively used by artists such as Andy Warhol, Russell Young, and Damien Hirst, adding a sense of significance, glamour and three-dimensional depth to their works. Diamond Dust captures light alluringly and draws attention to the colors of the work, as well as enhancing an artwork’s value and beauty. 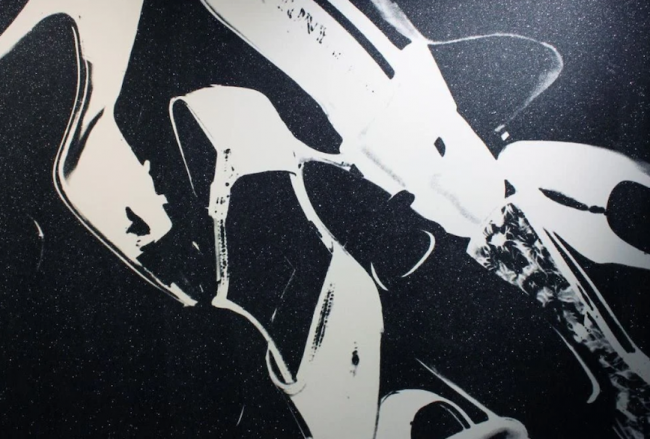 Andy Warhol was one of the first Artists to include Diamond Dust into his silkscreens with his earliest use being the 1980 series “Diamond Dust Shoes”. When Warhol initially came to New York, he started out as a commercial illustrator for magazines such as Glamour, Vogue and Harper’s Bazaar, therefore he was used to drawing and depicting jewelry, handbags, and clothing. One of Warhol’s first exhibitions was “Golden Slippers” in 1956, which displayed his gold leaf collages of shoes. In his later “Diamond Dust Shoes” series, he referenced and paid homage to his commercial roots but incorporated his new material, Diamond Dust. Each composition encompasses the inclusion of this crushed glass, enhancing and adding to Warhol’s long-established screen printing technique. The high-heels depicted in his work embodies the glamour and materiality of the Mid-Century United States that Warhol continuously commented on through his Art. 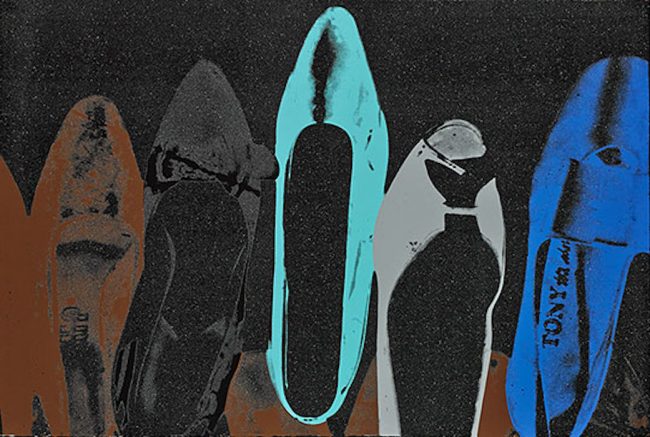 The Diamond Dust Shoe series started as an ad campaign assignment from fashion designed by Roy Halston Frowick. For these artworks, Warhol placed glistening, multi-colored arrangements of women’s shoes against black backgrounds, presenting a sincere perspective of shoes, scattered on the floor in no particular order.  The addition of the Diamond Dust to his practice, provides literal glamour, however, Warhol used inexpensive, mass-produced, pulverized glass for the diamond effect, thus demonstrating the illusion of wealth and the notion of the facade. The incorporation of Diamond Dust further heightened a sense of myth, luxury, and expense. This conforms to Warhol’s most iconic theme in his artwork: The Mass Consumerism of 20th Century America. 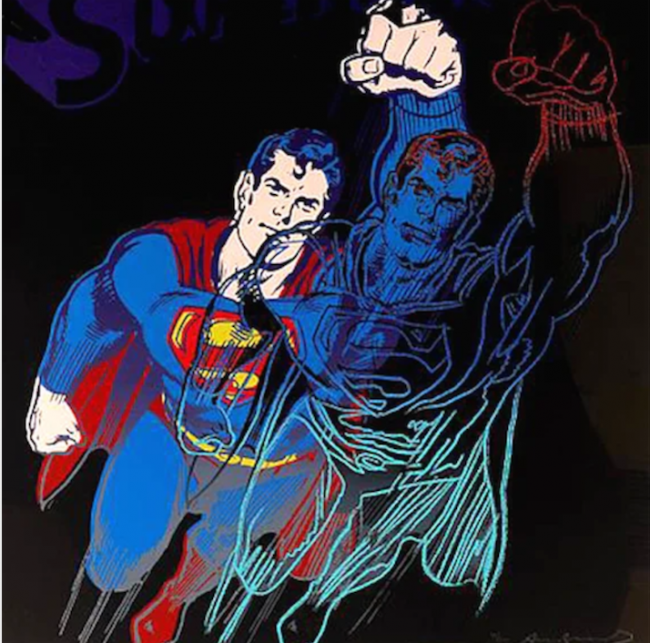 Warhol again utilized Diamond Dust in 1982, in his acclaimed image of Disney Character, Mickey Mouse. The piece was part of a series of 10 silkscreen prints called “Myths” which examined characters from American pop culture that had become icons, such as Superman, Santa Claus, and Mickey Mouse, to name a few. The bright and brilliant Diamond Dust portrayed and helped illustrate the mythical mirage created by Hollywood, Disney, and American Consumerism that Warhol sought to highlight. 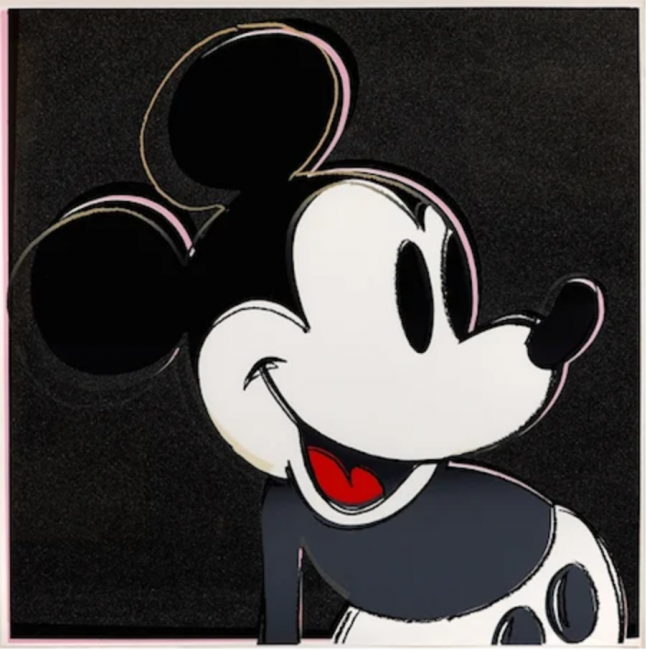 Warhol’s portraits inspired the more contemporary artist Russell Young. Internationally recognized for his larger-than-life silkscreen prints of Pop imagery that explore the nature of the American Counterculture, Young experimented with and adopted Diamond Dust into some of his works. Young is a fan of the material having said that he is “fascinated by the way light bounces off the three-dimensional surface of my Diamond Dust paintings… Light and the way it is reflected is as important as the subject matter.” Young has been captivated by the division and dichotomy of the myth and reality of the “American Dream”. He often personifies this division as Hollywood glamour, in opposition to our ‘knowing’ of the jaded reality of celebrity. 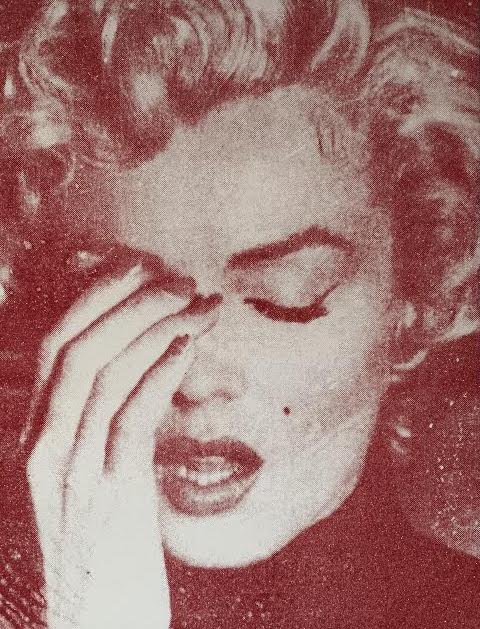 Young revamps and transforms cultural icons, such as Mick Jagger and Marilyn Monroe with his silkscreen process, his extraordinary and unique colors, and occasionally a glittering, diamond dust finish, providing commentary on the glamour and excess of Hollywood and surrounding the notion of celebrity. His prints present a visual exploration that exposes both the excess, and ambition that has aided in shaping the “American Dream”.  These works are a marvelous glorification of the celebrity, combined with presenting the tragedy of it all, the temporal beauty, wealth and the loss of innocence. The use of diamond dust allowed Russell to incorporate a three-dimensional aspect, along with reflectivity, into his work. The diamond dust glistens, shimmers and seizes light, and depending on where the painting is hung, it appears differently. 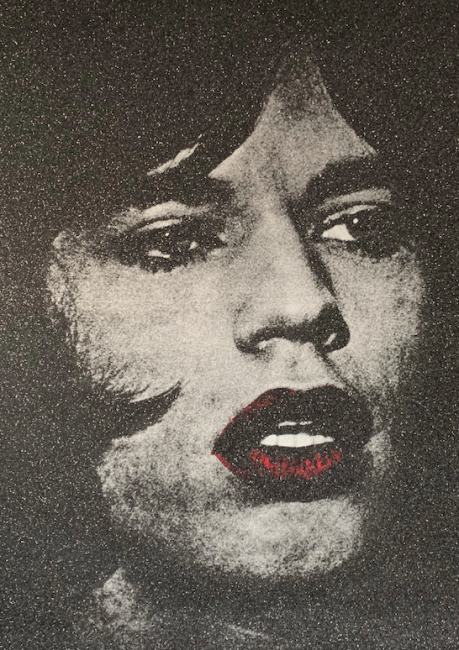 Another Artist that has adopted Diamond Dust into their work is Damien Hirst. In 2011, Hirst made “For the Love of God (White)”  a silkscreen print, based on the 2007 sculpture “For the Love of God” created by the Artist, which replicated a skull of a 35 year old man from the 13th Century, covered in platinum and set with over 8000 diamonds. The skull sculpture became the most expensive contemporary artwork in the world. The prints “For the Love of God (white)”(2011) and ”For the Love of God, Laugh”(2007),  act as reminders that our existence on earth is transient. Hirst merged the imagery of the classic memento mori, with the inspiration drawn from Aztec skulls and the Mexican love of decoration and attitude towards death. Hirst explained people’s attitudes towards death, “You don’t like it, so you disguise it or you decorate it to make it look like something bearable – to such an extent that it becomes something else.”. In Hirst’s art, skulls have a distinct role as symbols of his obsession with the inevitability of human mortality. “For the Love of God” supplies an illustrative case study for deliberating about art and value and the relationship between the two. Hirst implies that a certain kind of immortality may be attained by the art collector who acquires unique commodities and pulls them permanently out of circulation or makes them available for public use. Through the Hirst’s diamond-studded sculpture, and the diamond sprinkled silkscreen prints, the viewer is faced with a commentary regarding the status of money, excess and capitalism that is engulfing the art world. 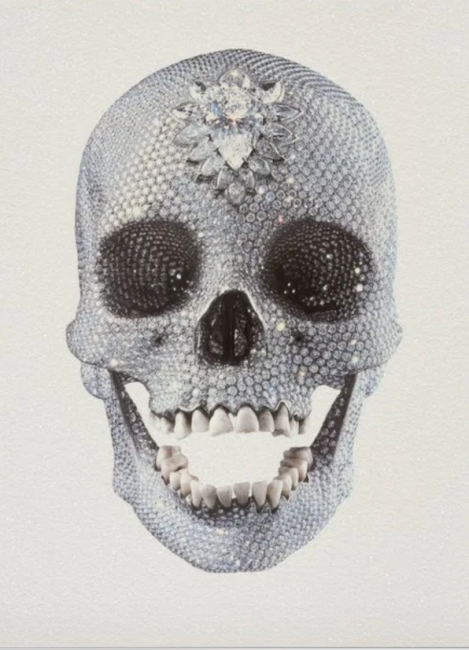 The use of Diamond Dust in art has a wide range of symbolism and presents a remarkable outlet for creativity when highlighting themes such as glamour, money and pop culture. It is a material that easily transforms the canvas into something captivating, unique and ornate. 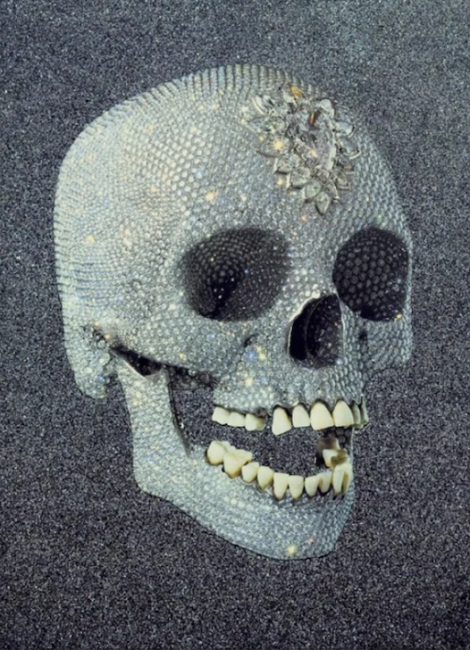