Unidentified British Street Artist, STIK, is widely recognized for his minimalist stick figures that are plastered onto buildings, water towers, doors and walls all around the world.  Born in the early 1980s in London, Artist STIK uses his work to draw attention to social and political issues such as the privatization and decay of the UK’s health service, worker’s rights, gentrification and more.  “A lot of my work is loaded with a kind of melancholy,”  declared  STIK. Intended to depict emotions such as insecurity and uncertainty in urban settings, STIK uses his own experiences as a lens when designing his artworks, from growing up in Hackney to undergoing homelessness in his youth. Though seemingly simple, STIK’s use of minimalist stick figures and bright colors are expressive, charming and playful yet full of meaning. 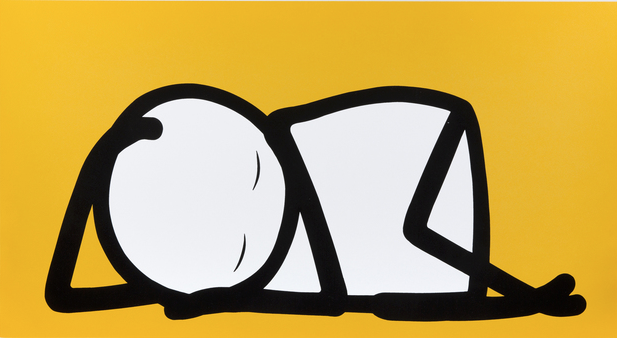 STIK’s characters are presented alone or as a group, sometimes holding hands or hugging, consistently painted in black and white against solid brightly colored backgrounds, conveying the significance of human interaction as well as body language. Explaining the reason behind his minimalist drawings, STIK stated that “using just six lines and two dots was the quickest way to paint a human figure without getting caught….I’ve always drawn in a very simplistic style. I never went to art school but I did work as an artist’s life model for many years, which gave me a good grounding in composition and anatomy. I started painting in the street in my early twenties, and that became an education in itself. I learned from my contemporaries.”.

Every location of STIK’s paintings is thoughtfully considered and chosen, in addition to being regularly maintained and revisited by STIK himself. He aspires to conform and harmonize with the immediate surrounding, architecture, and landscaping of the location, stressing the importance of community and preservation. STIK conforms to the traditional ideology of graffiti, stating that “Artistic statements should be free from censorship,” and argues that Street Art is an environmental medium. His mural in Manhattan’s East Village (Avenue A and E9th Street) named “Liberty” is a stick figure raising one arm, gesturing in solidarity to the artists and activists who have famously lived and worked in this area over the last few decades.

STIK encourages his audience to interpret his minimalist figures, allowing new takes and opinions on his artworks, revealing the power of these simple, yet emotion-filled drawings that reflect the community but also his mental state. Intended to be silent onlookers, his figures have no mouths, yet somehow subtly exude emotions and a feeling of longing.