Guy Hepner is pleased to present the ‘PoPlitically Incorrect’ Exhibition by artist Saint Hoax, an artist with an artistic intrigue unlike anyone in the world.

With an embedded infatuation with pop culture and politics, the Middle Eastern artist Saint Hoax has accumulated an impressive following for their satirical series of re-imagined popular icons, such as those included in PoPlitically Incorrect. Saint Hoax combines tangible and digital mediums, such as lenticular printing, to create the highly provocative and controversial works of some of the most powerful leaders and celebrities across the globe. This technique allows you to see different images when viewed at different angles. 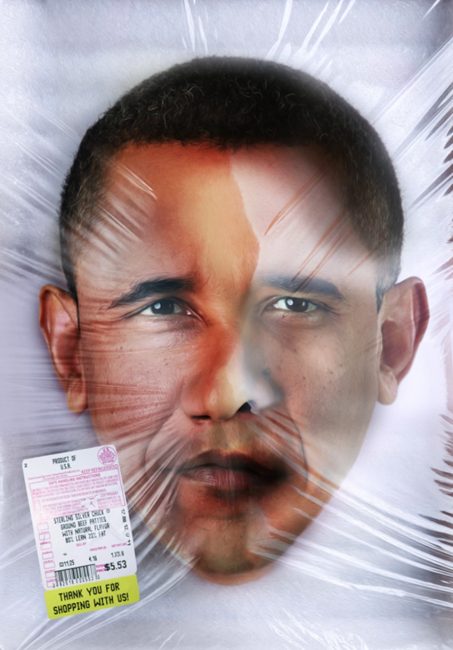 However, these aren’t just easy targets like George W. Bush. Saint Hoax, whose identity is unknown, has taken on figures in the vein of the King of Saudi titled Queen Abby, and Vladimir Putin titled Vladdy Pushin‘, and subsequently received death threats. Here the government chiefs are reworked into female forms, wearing ornate jewels and extravagant hairdos.”I got the idea to draw a comparison between leaders and drag queens after attending a drag show for the first time in May 2013″explains Hoax. “I want my artwork to become a constant reminder that the idolized leaders are merely performers in drag. My art is purely ‘POPlitical‘ rather than political.”

Artist Saint Hoax is inventive, informed, and an explorer of topics that so many others tip toe around, however need to be addressed. Speaking out on relevant issues through controversial artwork, this artist hopes to remove shame by replacing it with beautiful and comical visual lies that tell an ugly truth.