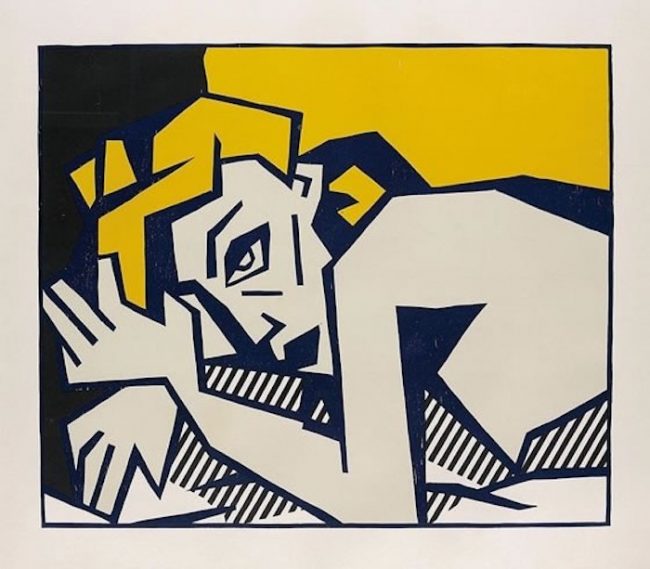 Reclining Nude references one of Lichtenstein’s fascinations – art history. Even though this work was created by the artist in 1980, it alludes to German expressionism. Popular in the early twentieth century before the outbreak of the First World War, German expressionism emphasized the artist’s inner feelings or ideas over the replicable reality of the outside world. The art produced by artists like Ernst Ludwig Kirchner , Wassily Kandinsky and Franz Marc emphasized simple shapes, bright colors and gestural marks or brushstrokes. Here, Lichtenstein replaces brushstrokes with his signature Ben-Day dots for shading. 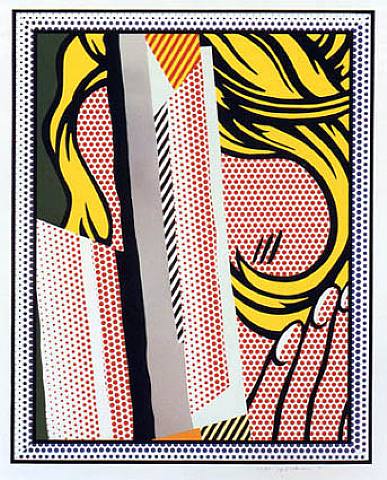 Reflections on Hair by Roy Lichtenstein

Lichtenstein’s Reflections series (based on a series of paintings that were first started in 1988) is the most visually and technically complicated printed series he ever made. In each image from the Reflections series the main image is partially obscured by blocks of color or patterns, some printed and some collaged to the surface of the print. In Reflections On Hair, the obfuscation of the hair creates a feeling distance between the artwork and the viewer. However, the use of familiar hallmark motifs, like Ben-Day dots and patterns in the colorway common to the artist help to draw the viewer into the image. 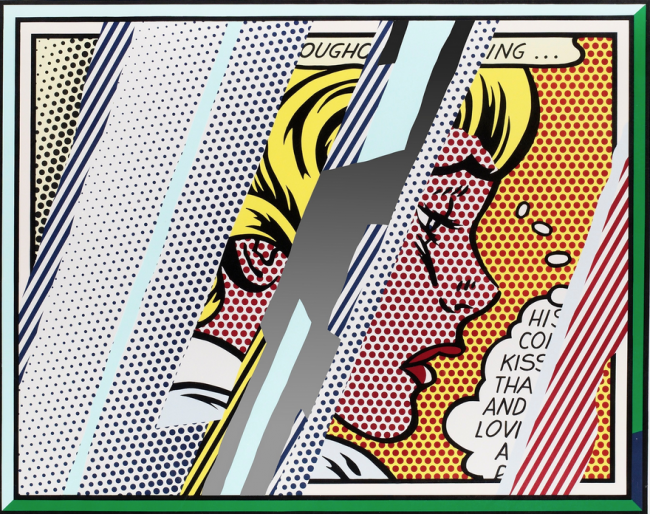 Reflections on Girl by Roy Lichtenstein

The subject matter refers to motifs and imagery from his own earlier work: the blonde girl, the Brushstroke and the girl frames of his Entablature series to name a few. Through appropriating images from the entirety of his own career, he is subtly establishing that his own work had already become part of the collective mass of visual culture. Technically, the works employ many different yet complementary methods of printing: lithograph, screenprint, relief, collage, embossing and woodcut. 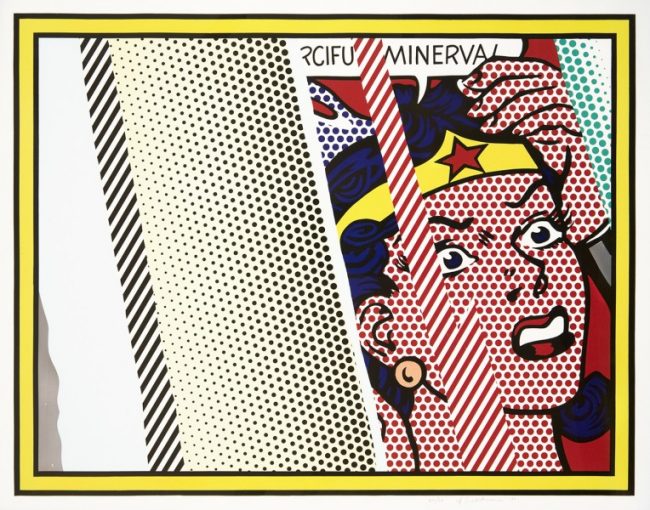 Reflections on the Minerva by Roy Lichtenstein

Created in 1994, Nude With Blue Hair, returns to Lichtenstein’s early pop vocabulary but with an updated twist. Technically, the artist employed printing methods that would enhance the volume of his cartoon-like female figure. He added diagonal stripes and his signature Ben-Day dots to create depth. The cartoon-female is now life sized, gazing directly at the viewer as if poised to step out of her giant cartoon strip. “[The Nude is] a good excuse to contrast undulating and volumetric form with rigid geometry.” (Roy Lichtenstein quoted in “Lichtenstein Returns To Comic-Book Style,” Sun Sentinel, November 13, 1994, 4F). 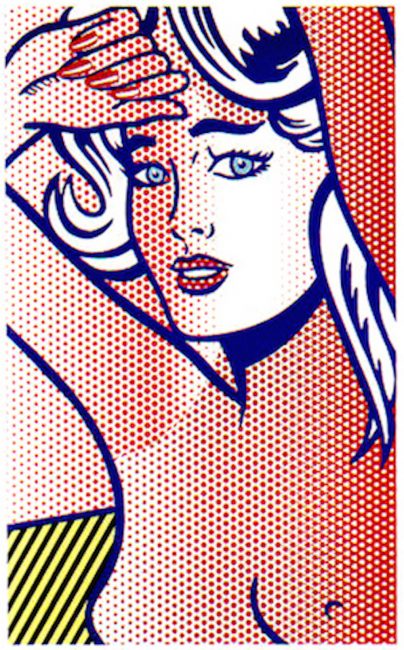 Modern Art I is part of a series of Modern Art prints Lichtenstein created in 1996, the year before he died. Here the artist explored the refracted style of Cubism found in the work of modern masters like Pablo Picasso. However, in Lichtenstein’s hands with the use of Ben-Day dots blocks of color and starck black outlines, the dislocated figures are transformed into highly stylized imagery more common to slick cartoons and comic books. The dislocated nose and other physical features of the face references the images Picasso used in Les Demoiselles D’Avignon, 1907 (Museum of Modern Art, New York). 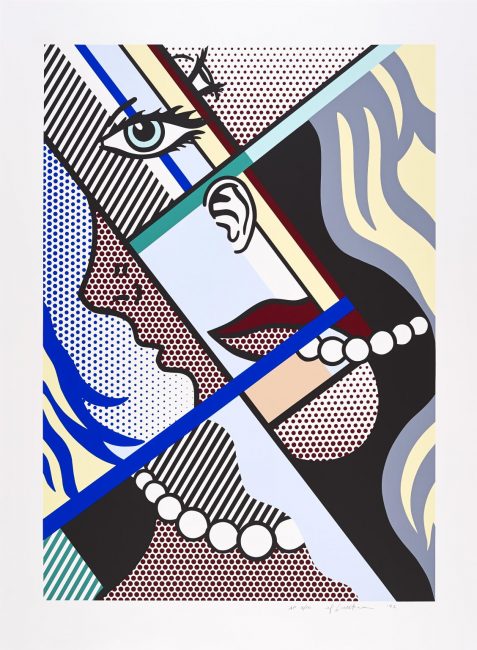 Modern Art I by Roy Lichtenstein

Lichtenstein explains, “Instead of using subject matter that was considered vernacular, or everyday, I used subject matter that was celebrated as art. What I wanted to express wasn’t that Picasso was known and therefore commonplace. Nobody thought of Picasso as common. What I am painting is a kind of Picasso done the way a cartoonist might do it, or the way it might be described to you, so it loses the subtleties of Picasso, but it takes on other characteristics: the Picasso is converted to my pseudo-cartoon style and takes on a character of its own. Artists have often converted the work of other artists to their own style.” (Roy Lichtenstein, A Review Of My Work Since 1961, in Graham Bader (Cambridge , MA: The MIT Press, 2009, p. 61).