One of the first American pop artists to achieve international fame, Roy Lichtenstein (born 1923) is mostly known for his large comic strip inspired works. These pieces, which today are among some of the most recognizable and iconic works of art, were not well received by critics and art historians when they were first created. The subject matter was deemed trivial and unoriginal and the works themselves were seen as having little or no relevance. As we look at these works today it is important to analyze Lichtenstein’s entire oeuvre to see the evolution of subject matter and technique as well as the constant references to art history hidden behind the popular culture imagery. 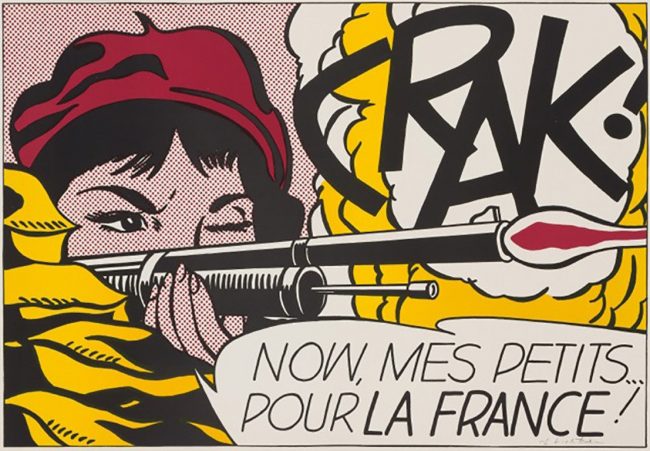 While in many ways pop art, and Lichtenstein’s work in particular, can be seen as being a rebuttal towards the abstract expressionist art, and the large gestural, deeply personal brushstrokes that were prevalent at the time, there is a clear connection to art history and to modernism within his work. While the subject matter and techniques employed were very much of his time, the deconstruction and reconstruction of the figures on the canvas are reminiscent of Russian Constructivism, early 20th century abstract art from Europe, as well as American 1960s minimalism. This continuous reinvention of the dialogue between realism and abstraction is one of the basic issues of twentieth century art and can clearly be seen in ‘Bull Profile Series’ (1973). Here, the recognizable form of the bull in the first print is transformed into a geometric abstraction by the last. Gradually, the animal is reduced to its core elements of horns, tail, spine and legs until only a small curved line suggesting a horn remains. 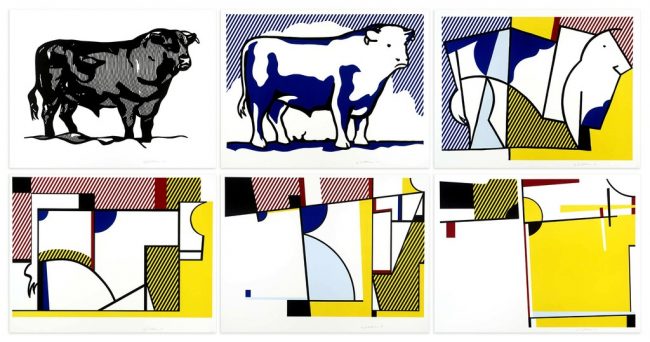 His interest in abstraction and color relationships, albeit intermittent, is sustained throughout his career as can be seen in his Perfect/Imperfect pieces, which he worked on starting in the late 1970s through to his death in 1997. In both series the line is the primary structural element; the Perfect series explores abstract compositions of intersecting triangles, large planes of color and signature Ben-day dots, all fitting neatly within the confines of a rectangular picture plane. The Imperfect paintings that followed, such as ‘Imperfect Diptych’ (1988), broke free from the rectilinear shape of their predecessors; for these works Lichtenstein explains that “the line goes out beyond the rectangle of the painting, as though I missed the edge somehow.” Accommodating this “mistake,” each Imperfect includes an attached triangular protuberance that breaks the edge of the canvas. 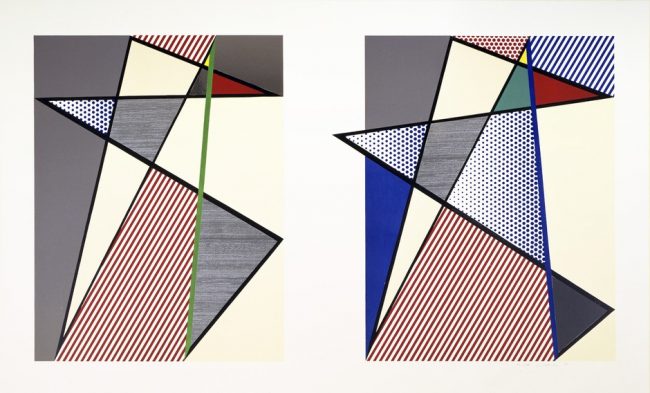 While his paintings of cartoons and comics are probably his most distinguishable work, his references to Cubism, Surrealism, and Expressionism in his many other series are undeniable. It is, in fact this re-imagining of pop culture through the lens of traditional art history that has remained a considerable influence to later generations of artists.

Guy Hepner is pleased to present a selection of Roy Lichtenstein prints. Inquire today on availability and pricing.