Prints were an integral part of Lichtenstein’s art from the very start of his career in the 1940s. Roy Lichtenstein’s work brilliantly joins four of the most potent forces in late-twentieth-century art: 1. The breakdown of barriers between art and life, using everyday objects as subjects appropriate to a consumer culture codified in the early 1960s as “New Realism,” “Neo-Dada,” or “Factualists” but known over the longer term as “Pop Art”; 2. An exploration of art based on other art (both “high” and “low,” the latter intersecting with “Pop”), that is generally referred to as “appropriation”; 3. An interest in serial imagery; and 4. Participation in the so-called print renaissance in which highly acclaimed painters and sculptors added printmaking to their repertoires. Indeed, Lichtenstein was in the vanguard of all four categories.

Since the mid-1960s Lichtenstein had been working in series and continued to do so until late in his career. Between 1948 and 1959, well before the surge of interest in printmaking developed in the 1960s, Lichtenstein had created a captivating body of more than thirty prints, in intaglio (etching, engraving aquatint, drypoint), lithography and woodcut primarily, but in one instance incorporating screenprinting as well. 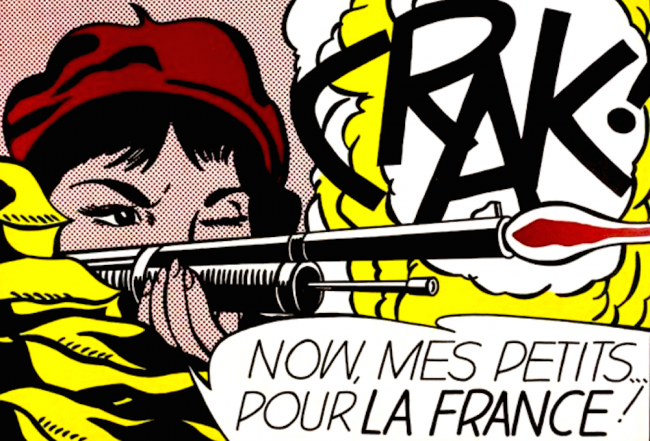 Few, if any of the painters and sculptors who came to printmaking in the 1960s came with so much technical knowledge as Lichtenstein, or with the experience he had for conceptualizing printmaking’s indirect processes. For example, apart from pieces, they might have made as students, artists who are so admired for their achievements in printmaking such as Jim Dine, Sam Francis, and Jasper Johns all made their earliest prints in 1960. And in contrast to Lichtenstein’s extensive body of early work, most of which he had personally printed, Ellsworth Kelly printed one lithograph himself in 1949 and did not work at printmaking again until 1964.

Lichtenstein’s prints offer a fascinating wedding of subject with process, of images exploiting the banal, overused, exhausted symbols of popular culture with the most potent syntax essential to most media communications. The methodology of print processes, the nature of the application, that is to say, the act of making identical marks, again and again, and again, is essential to Lichtenstein’s art, both in his bold Benday dot pattern magnifying the “look” of printed planes as structured by the repeated dots of a halftone screen, and in the multiplication of an entire image, again and again, and again, producing sizable print editions, thereby making original images available to a broader population than might ever enjoy access to the pleasures of his paintings and other unique works. 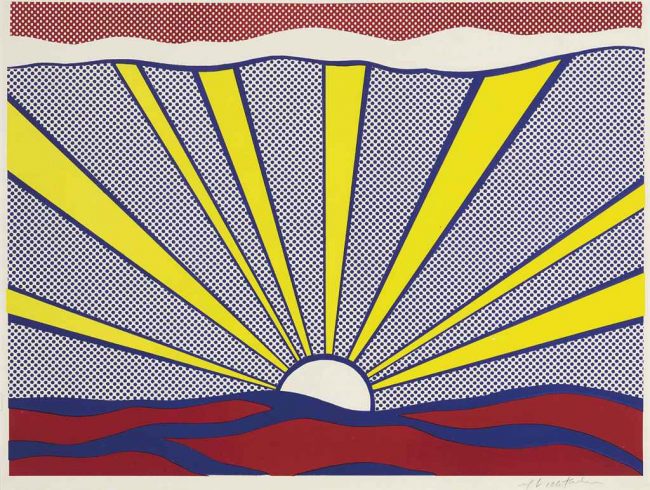 Among the artistic fathers most visible in Lichtenstein’s early prints is Paul Klee, whose schematic flattening of figurative elements, playful overtones, and marvelous interest in textures is apparent throughout, most particularly in the etchings. Picasso, however, has been an especially important force. His compositions, stylized drawing, verve, perhaps even his interest in virtually every printmaking process, all contributed to Lichtenstein’s early art, and Lichtenstein has consistently continued to quote from or allude to Picasso over the years. 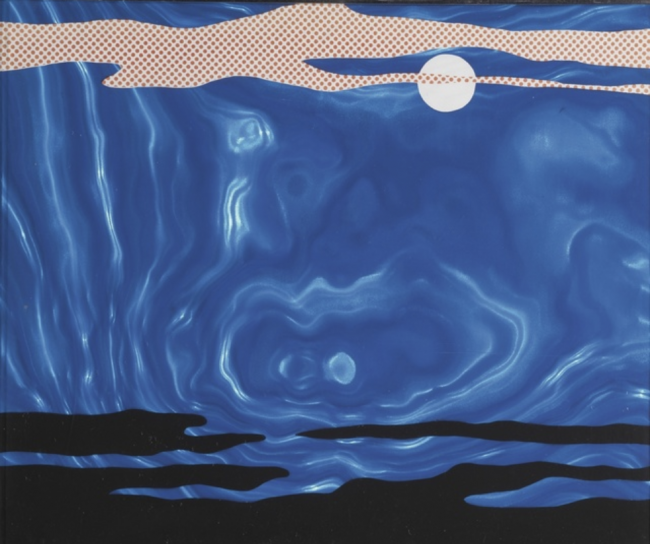 Lichtenstein’s propensity to try out all possibilities is seen in his approach to selecting papers. His early editions are printed on a wide range of Western and Japanese sheets, in whites, creams, and subtle colors such as blue, green, and gray. Many of the colored papers are from spiral-bound drawing books, and the prints on them may be marked by a row of punched holes with torn edges, the result of the sheet having been pulled from the metal spiral. Unlike the essential homogeneity of papers used for later editions printed in professional workshops, with the early prints several different papers are often seen in a single edition. “I could get supplies on the G.I. Bill,” he has said, “so I tried many different things.” 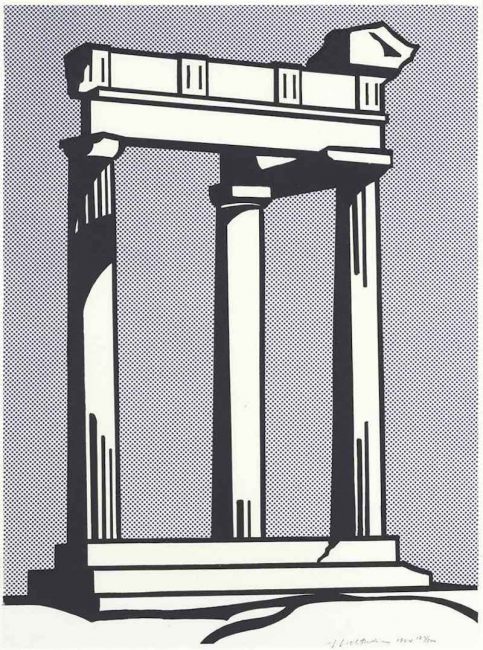 In 1960 he took a teaching position in New Brunswick, at Douglas, the women’s college of Rutgers, the State University of New Jersey. The move brought him closer to New York City, considered the most desirable location for a young artist. Lichtenstein’s colleagues in the art department at Douglas included Allan Kaprow, who was staging art events known as “happenings”; and George Segal, taking courses for a master’s degree, was about to embark on casting figures from life in plaster and putting them in environments.

Given the advanced ideas of these associates, his proximity to the downtown New York artists’ community, and his own work in the studio exploring comic-book imagery, Lichtenstein’s life was touched on all sides by new points of view that were about to turn the art world upside down. 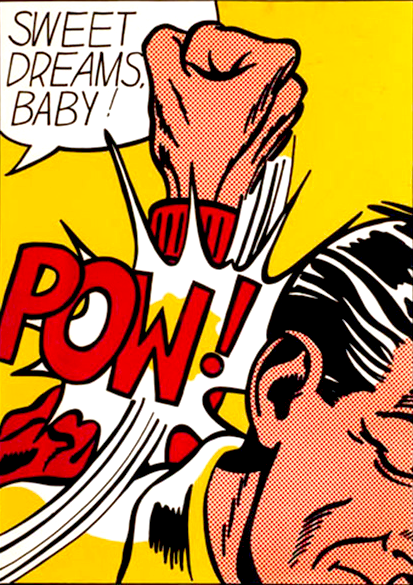