RISK: The Godfather of Graffiti

RISK: The Godfather of Graffiti

Kelly “RISK” Graval is prominently known as the originator of a bright and colorful west coast graffiti style. He pioneered “hitting up the heavens” which meant putting his graffiti as high as possible, scaling and writing on freeway signs and overpasses. He pioneered tagging freight trains to spread his name across the country. By the early 90’s, RISK could be seen all over Los Angeles. Steeped in the commercialism of American culture, success and fame were synonymous for a young Graval. Reflecting on his past, he said, “I wanted to be just like Coca-Cola.” RISK has branded his namesake Riskoleum works as a greater comment on pop art and consumerism in society. 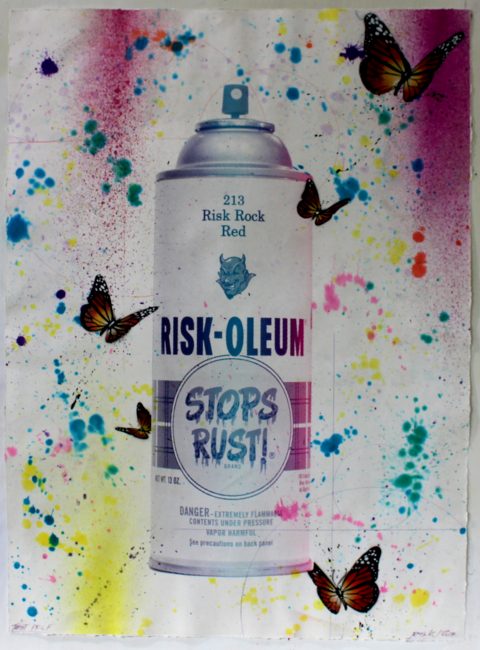 RISK’s mixed-media work follows in the rich tradition of Pop Art. Iconography from Buddhism, rock and roll, advertising, and cartoons figure prominently in his work. Working in neon translates his bright palette into light while painting on metal calls back to the many nights spent in the railyards of Los Angeles County. Graval’s work plays with visual and material juxtapositions to both draw in and push back on the viewer. Metal, lights, paint, grit, and shine are the materials of Graval’s practice and the materials of the city that raised him.

RISK’s art has been the subject of museum exhibits. He has been a featured artist in the highly successful “Beyond the Streets” exhibits in Los Angeles and New York. RISK art spans the spectrum of everything from renowned clothing brands and canvas pieces to massive street murals that breathe life into their communities. He is a regular collaborator with some of the world’s top musicians. His art can be seen in many music videos, including the Red Hot Chili Peppers, Ice Cube, Bad Religion and the legendary Michael Jackson not to mention a high profile collaboration with Aerosmith. RISK has also worked with some of the most notable music festivals and events around the globe including Coachella, the MTV Music Awards, Sunset Strip Music Festival, and The Doors . He has hand painted concert outfits for Halsey and designed the cover art for Blink 182’s album “9” even creating the lyric music video for their latest hit single Blame It On My Youth . RISK was one of a handful or artists worldwide invited to paint at the 2019 and 2020 Super Bowls by the NFL and has done brand projects for Monster Energy, Lyft and Indian Motorcycles.

RISK has solidified his place in the history books as a world-renowned graffiti legend often termed the godfather of graffiti . He has come a long way since he pioneered the painting of freeway overpasses, signs and billboards, dubbed “heavens.” Although RISK loves aerosol art, he sees it as merely just one genre in his life’s work. From his days as a student at the USC School of Fine Arts to gallery and museum showings around the world; RISK has transformed from a street artist to a rising star in the contemporary art world.

Today, RISK stays connected to his roots by supporting artists and giving back to the community with countless charitable endeavors. He continues to travel the globe showcasing his art, and generating media attention from the likes of The Los Angeles Times, countless magazines, NBC, Carson Daly, BBC, and many others. The mark that RISK has left on graffiti culture will be showcased in his upcoming Biography ” KEEP ON KEEPIN ON “. Risk continues to break down barriers in both art and commerce while remaining grounded and respectful of the culture he helped build.

Born in New Orleans and raised in California, RISK is a fine artist, illustrator, and graffiti artist whose name has been synonymous with the urban art community for over 35 years. Guy Hepner is pleased to represent the illustrious career of this artist and to unveil a new release by the artist that has been 7 years in the making this coming Thursday 23 April, 2020.