The original canvas came from the iconic Tower Records store on Sunset Boulevard. It was a major destination and music hub for the community for decades. It was also a place for music lovers and musicians alike to hang out, see bands perform and for fans to get autographs from their idols. While the squat, rectangular building may sit empty now, memories of the store undoubtedly remain vibrant for many. A gift to RISK because they knew Led Zeppelin was his favorite band . The finished work is massive in format reminiscent of murals that decorate urban walls. 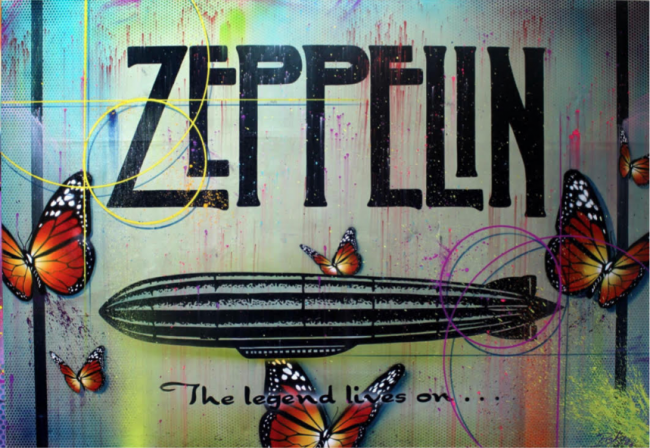 RISK was the graffiti artist who started the “Going to the Heavens” movement. “Heavens” meant putting your work up as high as possible. Freeways, overpasses, rooftops, and billboards became showcase spots for graffiti artists. In the mid-1980s, RISK was credited as the first graffiti artist to put his tag on a billboard. Dennis Hopper was more than just an actor. He was also an accomplished photographer and artist. Shortly before his death in 2010, Hopper asked RISK to paint one of his large-scale photographs of an iconic billboard in Los Angeles.

RISK put the photograph away for safekeeping but recently decided to finish the project. The end result was an original painting that keeps the Dennis Hopper photograph as the primary subject but adds RISK’s “tag” as part of the billboard. The finished painting is both an homage to the memory of Dennis Hopper and a rare piece of graffiti history. 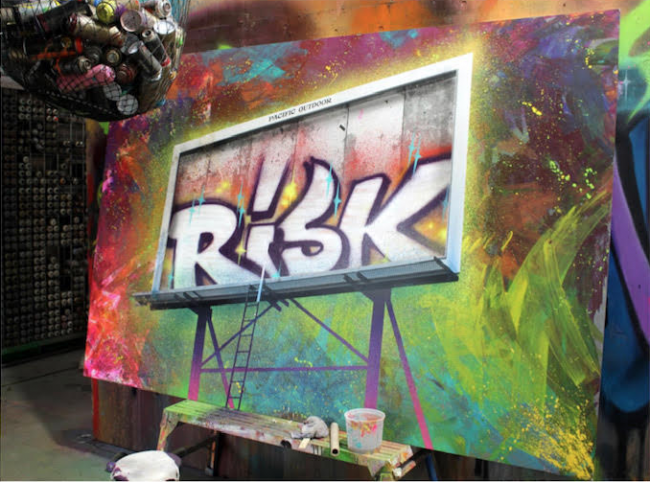 To see what other original works RISK has been creating in his studio please visit the Summer 2020 selection.