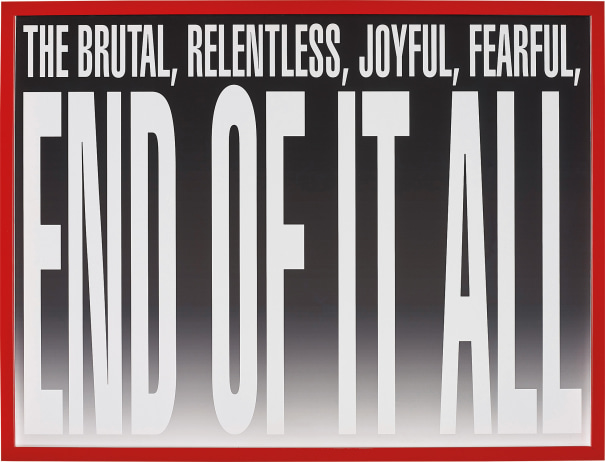 Untitled (The Brutal, Relentless, Joyful, Fearful, End of it All) by Barbara Kruger

Untitled (The Brutal, Relentless, Joyful, Fearful, End of it All) by Barbara Kruger

Barbara Kruger (1945-) is an American Conceptual artist known for her combination of text and image that demonstrates a direct feminist cultural critique. By using text as a crucial communication vehicle in her artistic practice, Barbara Kruger explores the stereotypes and behaviors of consumerism. “I’m fascinated with the difference between supposedly private and supposedly public and I try to engage the issue of what it means to live in a society that’s seemingly shock-proof, yet still is compelled to exercise secrecy,” she explained of her work.  Her work urges the viewer to examine their own beliefs about how these long-established media outlets alter and bias our perceptions.

Kruger worked as a Graphic Designer and Art Director after studying at both Syracuse University and Parsons School of Design in the 1960s. In the late 1970s, Kruger took up photography, but by 1979 she had stopped taking photographs and had begun to employ found images in her art, mostly from mid-century American print-media sources, with words pasted directly over them. Influenced by the Constructivist Alexander Rodchenko, Kruger introduced short phrases such as “Thinking of You” and “I shop therefore I am” into her work to communicate her ideas, as well as to catch the viewer’s attention by using the language of contemporary magazines and publications.

During the early 1980s, Barbara Kruger perfected a signature style, using cropped, large-scale, black-and-white photographic images juxtaposed with ironic aphorisms, printed in Futura Bold font against black, white, or deep red text bars. Rather than seeking to sell a product, Kruger’s works aim to sell an idea to the viewer, attempting to provoke a review of one’s immediate context.

In recent years Barbara Kruger has extended her aesthetic project, creating public installations of her work in galleries, museums, municipal buildings, train stations, and parks, as well as on buses and billboards around the world.  She currently lives and works between New York, NY and Los Angeles, CA. Today, the artist’s works are held in the collections of The Museum of Modern Art in New York, the National Gallery of Art in Washington, D.C., the Art Institute of Chicago, and the Walker Art Center in Minneapolis, among others.  Kruger has incorporated sculpture into her ongoing critique of modern American culture.