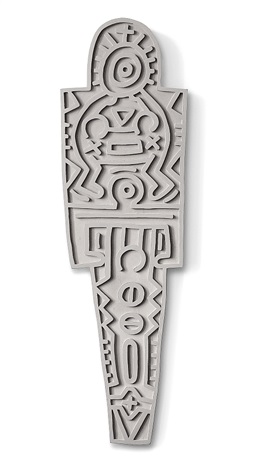 Bridging the gap between the art world and the street, Keith Haring rose to prominence in the early 1980s with his graffiti drawings made in the subways and on the sidewalks of New York City. Combining the appeal of cartoons with the raw energy of Art Brut and artists like Jean DuBuffet, Haring developed a distinct pop-graffiti aesthetic centered on fluid, bold outlines against a dense, rhythmic overspread of imagery like that of babies, barking dogs, flying saucers, hearts, and Mickey Mouse.

Along with Jean-Michel Basquiat, Haring was a central figure in Warhol’s creative and social circle. Through his public murals, subway drawings, as well as his prints and paintings, Haring created a range of images that have become internationally recognized and heavily iconicized across a bevy of genres and industries.