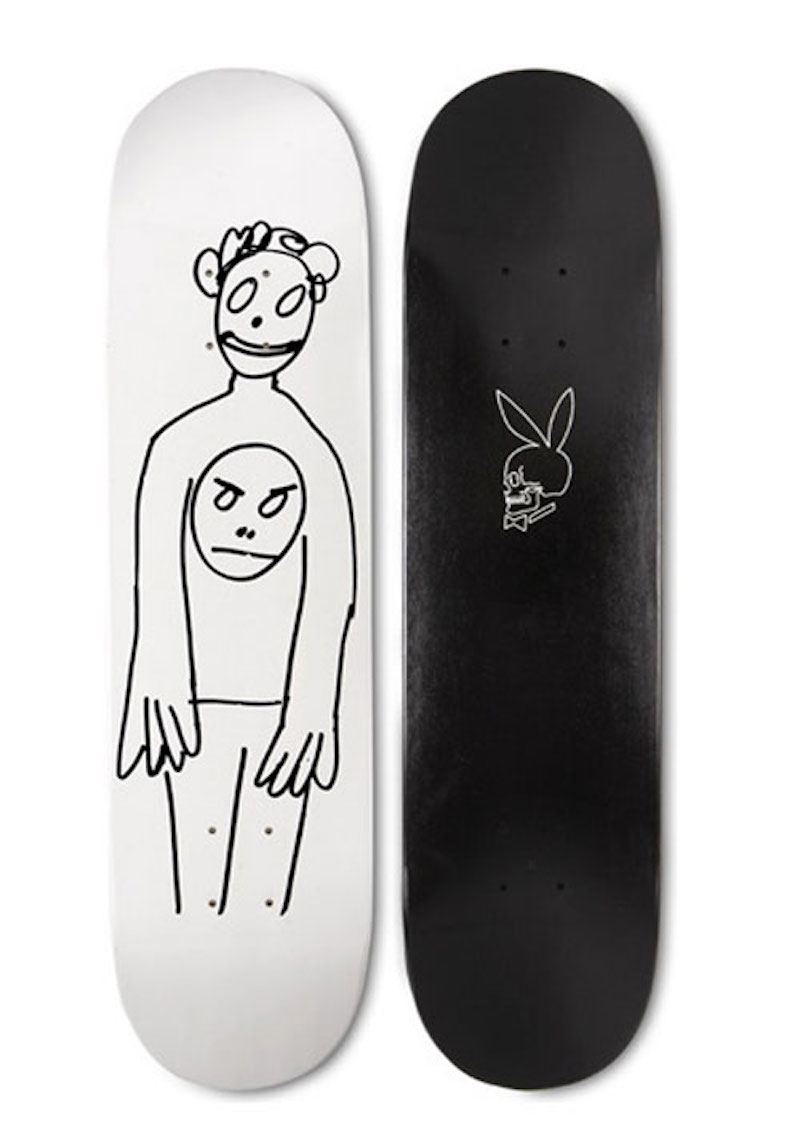 Set of 2 Supreme Richard Prince Skate board decks available for a limited time only.

Richard Prince was born in 1949 in the Panama Canal Zone and lives and works in upstate New York. Mining images from mass media, advertising and entertainment since the late seventies, Prince has redefined the concepts of authorship, ownership, and aura. Applying his understanding of the complex transactions of representation to the making of art, he evolved a unique signature filled with echoes of other signatures yet that is unquestionably his own. An avid collector and perceptive chronicler of American subcultures and vernaculars and their role in the construction of American identity, he has probed the depths of racism, sexism, and psychosis in mainstream humor; the mythical status of cowboys, bikers, customized cars, and celebrities; and most recently, the push-pull allure of pulp fiction and soft porn, producing such unlikely icons as the highly coveted Nurse paintings.

Prince was first interested in the art of the American abstract expressionist Jackson Pollock. “I was very attracted to the idea of someone who was by themselves, fairly antisocial, kind of a loner, someone who was noncollaborative.” Prince grew up during the height of Pollock’s career, making his work accessible. The 1956Time magazine article dubbing Pollock “Jack the Dripper” made the thought of pursuing art as career possible. After finishing high school in 1967, Prince set off for Europe at age 18.

He returned home and attended Nasson College in Maine. He describes his school as without grades or real structure. From Maine he was drawn to New York City. Prince has said that his attraction to New York was instigated by the famous photograph of Franz Kline gazing out the window of his 14th Street studio. Prince described the picture as “a man content to be alone, pursuing the outside world from the sanctum of his studio.”

Prince’s first solo exhibition took place in June 1980 during a residency at the CEPA gallery in Buffalo, New York. His short book Menthol Pictures was published as part of the residency.In 1981 Prince had his first West Coast solo exhibition at Jancar/Kuhlenschmidt Gallery in Los Angeles. In 1985, he spent four months making art in a rented house in Venice, Los Angeles.

In late 2007, Prince had a retrospective at the Solomon R. Guggenheim Museum, a comprehensive show hung in chronological order along the upward spiraling walls. The show continued onto the Walker Art Center in Minneapolis. Maria Morris Hamburg, the curator of photography at the New York Metropolitan Museum of Art, asserted, “He is absolutely essential to what’s going on today, he figured out before anyone else—and in a very precocious manner—how thoroughly pervasive the media is. It’s not just an aspect of our lives, but the dominant aspect of our lives.”

Prince has built up a large collection of Beat books and papers. Prince owns several copies of On the Road by Jack Kerouac, including one inscribed to Kerouac’s mother, one famously read on The Steve Allen Show, the original proof copy of the book and an original galley, as well as the copy owned by Neal Cassady (the Dean Moriarty character in the book), with Cassady’s signature and marginal notes.

Describing his career and methodology in a 2005 New York magazine interview, Prince said, “It’s about knocking about in the studio and bumping into things.

In latest news, Prince would repeat his exhibit from Gagosian with a new exhibit for the Frieze Art Fair in NYC of 2015. However, Prince would end up making headlines due to selling the portraits for profit–at the fair, Prince sold enlargements of his Instagram feed and comments for $90,000.