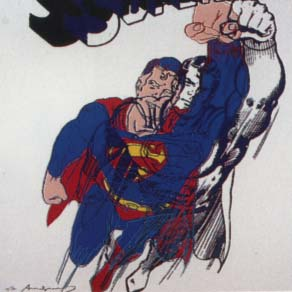 Superman Trial Proof is part of Warhol’s Myths portfolio, which also included characters such as Superman, Mickey Mouse, and Dracula.An iconic figure that many are familiar with, Superman is a character that originates from comic books and has been a hero to many for decades. The traditional image of Superman in his blue and red cape is juxtaposed with a lighter outline of the same image, suggesting we have captured him in the middle of his ascension.