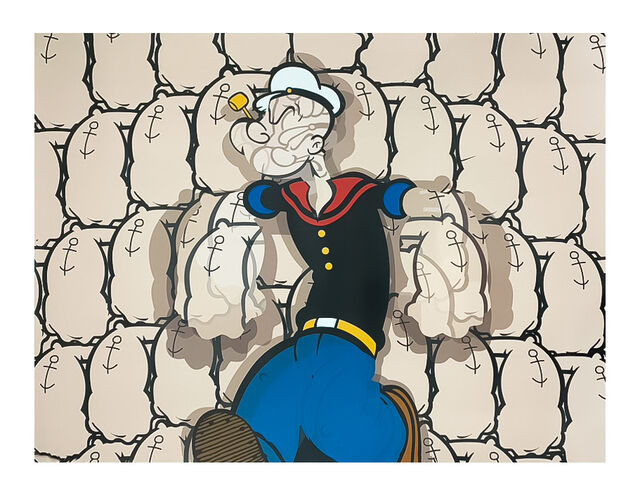 Strong to Finish by Jerkface

Strong to Finish by Jerkface

“I think my work can fall under quite a few names depending on who you ask, and I’d rather leave it up to others to define it.”

The New York-born and –based artist Jerkface rose to prominence thanks to his Pop-influenced representations of iconic cartoon characters, which he often reproduces in layered patterns across the picture plane. Jerkface received his artistic training through New York’s street art scene, and his flattened figuration and bright color palettes reflect this influence. Though the artist first found success on the East Coast, his practice has expanded both geographically and artistically. Renowned for his playful re-imagination of pop culture iconography, you can easily recognize his arts by his colorful murals borrowing famous cartoon characters from our childhood such as Mickey Mouse, Homer Simpsons, and many more. Jerkface’s signature can be defined as the use of character repetition and geometric abstraction in his art. Jerkface murals now adorn cities around the world, and he has exhibited paintings in Hong Kong, New York, and beyond. The artist has said that he’s interested only in creating optimistic work; there’s already enough negativity in the world. Some of his works were sold at Sotheby’s auction in Hong Kong in 2017.