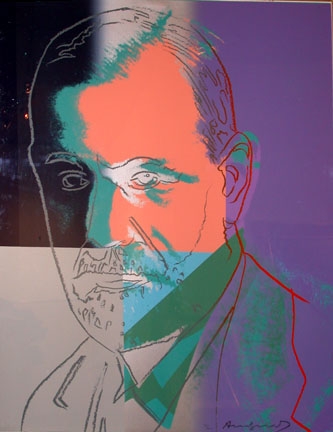 Sigmund Freud by Warhol from The Jews Portfolio (235)

Sigmund Freud was an Austrian neurologist who famously became known as the founding father of psychoanalysis. Freud’s development of this new therapeutic technique involved methods of dream analysis, along with what is referred to as the “talking cure,” where patients would speak and recall memories in an attempt to reduce the severity of symptoms. While there have been improvements and expansion on his varying theories, Freud remains recognized for his contributions to psychology and is a highly influential historical figure. His work in the development of therapeutic treatments and theories, including his work with the unconscious and dreams were very influential outside of the medical field as well. Notably, artists in the surrealist movement, took to his ideas of accessing the unconscious and put them to work in their art practices.

Sigmund Freud is a part of Andy Warhol’s Ten Portraits of Jews of the 20th Century. Freud’s psychoanalysis aimed toward developing therapeutic practices to deal with trauma. Warhol, in many of his works, also investigates trauma, how it is translated through image and the effect image can have on trauma or on traumatic content. Warhol was prolific in creating portraits of celebrities and was well known for his fascination with fame. It is noted that Warhol’s portraiture tends to reveal only the surface of a subject, just their image. In this series of portraits, the type of celebrity Warhol deals with is not so glamorous or typical of his usual pick of movie or rock stars. Each portrait is of a very influential figure in either the arts, sciences, or law.