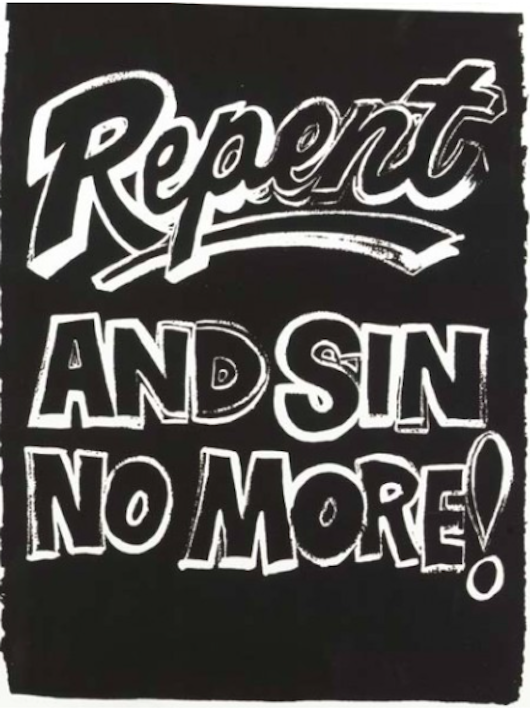 Repent and Sin No More by Andy Warhol

Repent and Sin No More (Black) from the Late Paintings

Repent and Sin No More by Andy Warhol

Andy Warhol’s late period was characterized by a burst of artistic innovation and production. Repent and Sin No More by Andy Warhol  is an example of his later works. Those surrounding Andy Warhol during this time remarked on his tremendous vitality and enthusiasm as Andy Warhol re-immersed himself in painting. Andy Warhol embraced each new idea passionately, working tirelessly on his many projects

Andy Warhol was skilled (analog) social networker, Warhol parlayed his fame, one connection at a time, to the status of a globally recognized brand. Decades before widespread reliance on portable media devices, he documented his daily activities and interactions on his traveling audio tape recorder and beloved Minox 35EL camera.  Predating the hyper-personal outlets now provided online, Warhol captured life’s every minute detail in all its messy, ordinary glamour and broadcast it through his work, to a wide and receptive audience.Although best known for his silkscreen paintings, Andy Warhol was also an excellent draughtsman. Drawing was a constant part of his artistic practice. This Negative( Black) version of Repent and Sin No More by Andy Warhol is one of his most interesting canvases that relates a lot to advertising. Warhol started painting readily found, mass-produced objects, drawing on his extensive advertising background.  When asked about the impulse to paint Campbell’s soup cans, Warhol replied, “I wanted to paint nothing. I was looking for something that was the essence of nothing, and that was it”.