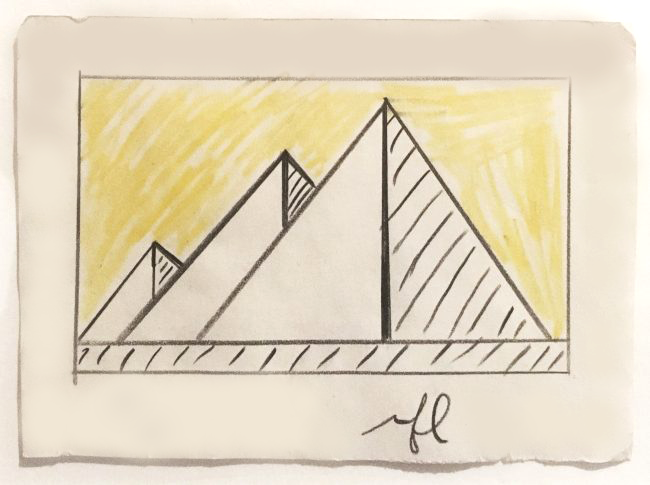 Roy Lichtenstein’s Pyramid Study of Egypt’s Pyramids of Giza, exemplifies how he used small colored-pencil drawings as templates for his final renderings. We see his trademark use of primary colors, in this case, only black, white, and yellow, and simplified outlined images.

Roy Lichtenstein’s Pyramids Study of Egypt’s Pyramids of Giza, exemplifies how he used small colored-pencil drawings as templates for his final renderings. We see his trademark use of primary colors, in this case, only black, white, and yellow, and simplified outlined images.

Roy Lichtenstein was a pop art painter whose works, in a style derived from comic strips, portray the trivialization of culture endemic in contemporary American life. Using bright, strident colors and techniques borrowed from the printing industry, he ironically incorporates mass-produced emotions and objects into highly sophisticated references to art history.He  was one of the first American Pop artists to achieve widespread renown, and he became a lightning rod for criticism of the movement. Born in New York City in 1923, Lichtenstein studied briefly at the Art Students League, then enrolled at Ohio State University. After serving in the army from 1943 to 1946, he returned to Ohio State to get a master’s degree and to teach.

In the 1970s and 1980s, his work began to loosen and expand on what he had done before. He produced a series of “Artists Studios” which incorporated elements of his previous work. A notable example being Artist’s Studio, Look Mickey (1973, Walker Art Center, Minneapolis) which incorporates five other previous works, fitted into the scene. In the late 1970s, this style was replaced with more surreal works such asPow Wow (1979, Ludwig Forum für Internationale Kunst, Aachen). In 1977, he was commissioned by BMW to paint a Group 5 Racin g Version of the BMW 320i for the third installment in the BMW Art Car Project. In addition to paintings, he also made sculptures in metal and plastic including some notable public sculptures such as Lamp in St. Mary’s, Georgia in 1978, and over 300 prints, mostly in screen printing.