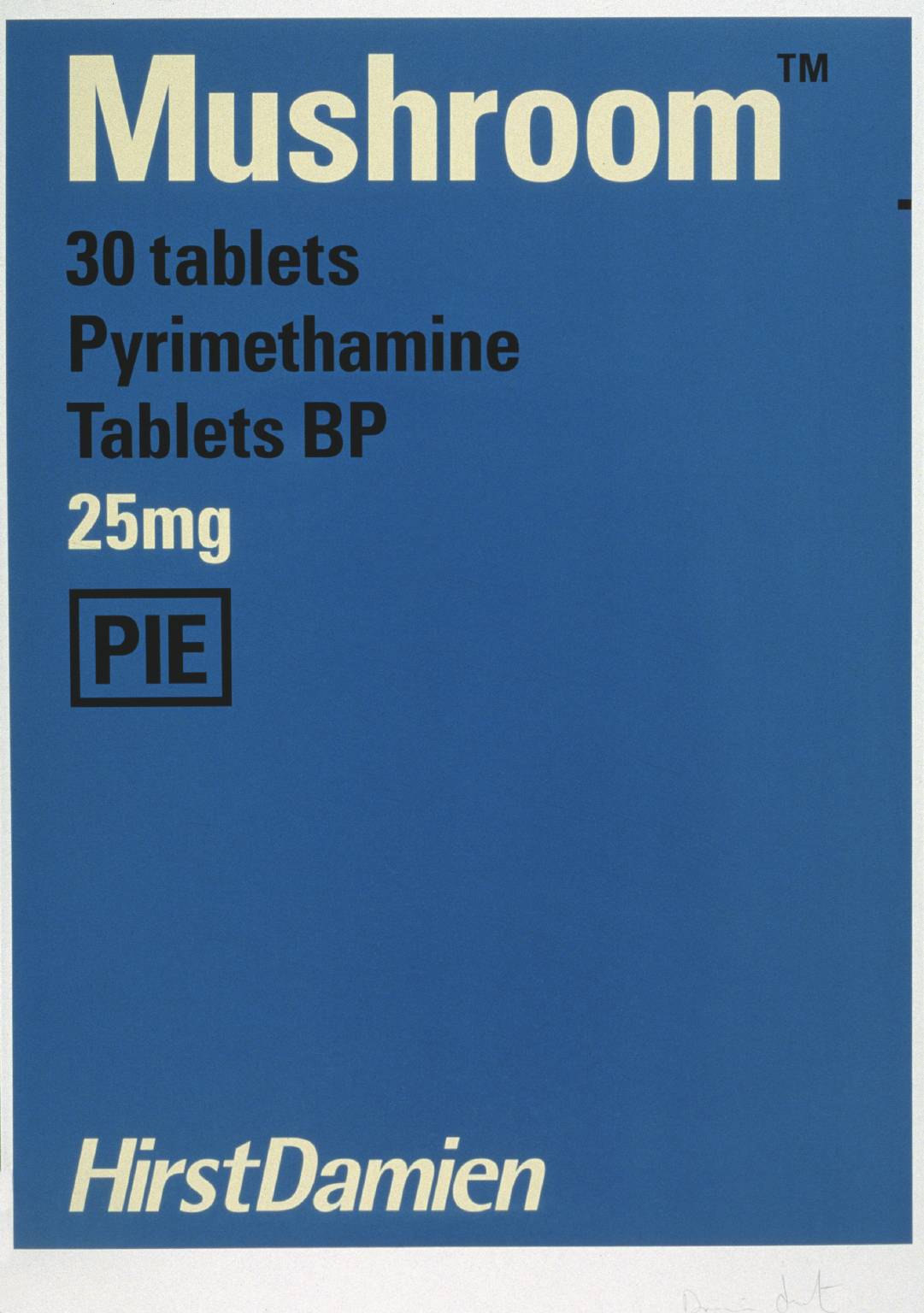 The Last Supper, a suite of 13 of prints by Damien Hirst from 1999, highlights the falsity of the dichotomy of superficiality versus depth and presence.

The surface of The Last Supper not only cites the “imagery” of pharmaceutical packaging, but also suggests its smooth appearance and implicitly refers to popular print media, such as magazines and publicity material.  In doing so, it reveals the  superficiality so typical of packaging and shows the screen print to be at the very core of people’s mediated consumer culture.

The Last Supper is a series of thirteen large screen prints. The Last Supper was proofed and printed at Coriander Studio, London in an edition of one hundred and fifty plus a small number of artist’s proofs. Between three and seven screens, or colors, were used to make each print. They are unnumbered, do not follow a particular order and may be displayed individually or in groups. The images are derived from pharmaceutical packaging. Hirst has replaced the name of the drug with the name of a food traditional to working class British café culture, for example ‘corned beef’ and ‘sausages’, transforming the food into a brand by the addition of the insignia ®, TM or decorative typescript. Such variations on the artist’s name as Hirst, Hirst Damien, Damien, Damien & Hirst, Hirst Products Limited, also set in a range of typescripts, have taken the place of the usual drug manufacturer’s logo. On the print Chicken  additional humor is created by a penis-shaped logo in a black circle above Hirst’s name, parodying the brand logos that companies commission to reflect their corporate identities. Hirst has compared medical packaging to the formats of minimalism, saying: ‘a lot of the actual boxes of medicines are all very minimal and could be taken directly from minimalism, in the way that … minimalism implies confidence.’

Hirst has been using medical packaging in his work since the late 1980s. Several works consisting of glass-fronted medicine cabinets filled with empty packaging were included in his first solo exhibition at the Institute of Contemporary Arts, London in 1991. Such titles as New York1989 (private collection, London) and E.M.I. 1989 (Jay Jopling, London) suggest an association between the arenas of glamour, money and pharmaceuticals. Pharmacy 1992  is a room-sized installation representing a pharmacy, the walls of which are lined with similar medicine cabinets filled, floor-to-ceiling, with empty pharmaceutical packaging. For Hirst medicine, like religion and art, provides a belief system which is both seductive and illusory. He has said: ‘I can’t understand why some people believe completely in medicine and not in art, without questioning either’ (quoted in Damien Hirst, exhibition catalogue, Institute of Contemporary Arts, London 1991, [p.9]). The Last Supper refers to the way in which medicinal drugs are becoming a regular part of everyday life, as common as the food Hirst has chosen to represent. Like pharmaceuticals, the side effects of which are not always pleasant or harmless, these common British foods often contain an unappetizing and potentially dangerous cocktail of drugs, including whatever chemicals the industrially farmed animals have been fed, and notoriously large amounts of heart disease-inducing saturated fat. Medicines, prescribed by doctors to alleviate and cure illness, are commodities manufactured and sold by large corporations. Like the Brillo boxes, Coke bottles and Campbell’s Soup packaging imitated by American artist Andy Warhol (1928-87) in the 1960s, Hirst’s version of The Last Supper refers to the everyday dependence on reliable panaceas which medical and fast food industries feed off (Warhol also submitted this subject to the manufacturing process of screen printing). Hirst has commented, ‘I like the idea of an artist as a scientist. A painter as a machine. The packages in The Last Supper and in the medicine cabinets are … trying to sell the product … in a very clinical way. Which starts to become very funny.’ All of Hirst’s thirteen components in his version of The Last Supper are potential betrayers, providing a humorously cynical comment on self-destructive aspects of British society.

Another version of The Last Supper 2000 (destroyed) was created for Hirst’s exhibition at Gagosian Gallery, New York, in autumn 2000. It is a series of thirteen silkscreened packaging covers, like the series of prints, mounted on aluminum panels and hung as one large piece nearly ten meters long. It covers another list of potentially fatty foods, which combine such English favorites as ‘Cornish pasty’, ‘Cauliflower cheese’ and ‘Toasted cheese sandwich’ with such imports as ‘Vindaloo’, ‘Duck liver’, ‘Foie gras’ (staples of internationally influenced, post-colonial British cuisine) and such American cuisine terms as ‘Eggplant’, ‘Vongole’ and ‘Zucchini’ (also internationally influenced).