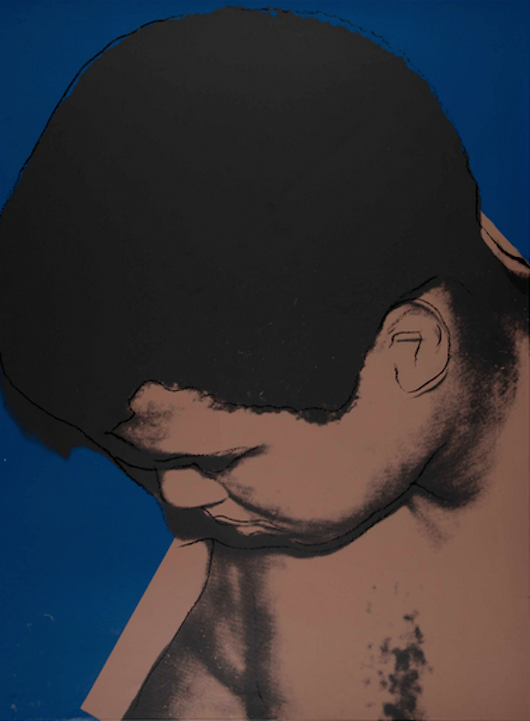 Looking at Muhammad Ali, one can almost hear the boxer’s famous, defiant statement — “I am the greatest!” Executed in 1977, Warhol’s picture of Muhammad Ali shows the boxer at the height of his fame and talents. At that point he was — for the third time — the World Boxing Association Heavyweight Champion. After more than a decade of professional bouts, he remained able to stun his opponents with his agility, winning fight after fight. Warhol has chosen to portray this giant of boxing, this sporting hero, in a combative pose; the raised fists are the tools of his trade, the attributes, his only necessary paraphernalia — they are the raw materials with which the boxer made his name and reputation.

Muhammad Ali is presented here as a Pop icon, a god of the modern age, a contemporary hero and significantly, he is presented as a contemporary black hero, marking Warhol’s detached yet significant participation in the race politics of his day. This is one of the first major celebrations of a black hero in American art, and as such in part prefigures the paintings of Warhol’s protegé, Jean-Michel Basquiat, who would become determined to place black heroes at the centre of art, having noticed to what extent they had been neglected or excluded for centuries prior to that. Even the presence of the African-American in art thanks to George Bellows had been relatively fleeting and had occurred over half a century earlier.