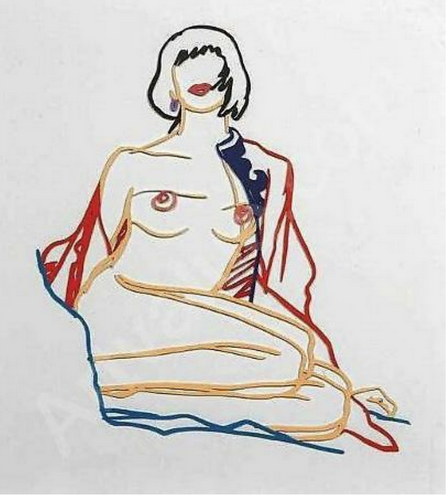 Tom Wesselmann is considered one of the major artists of New York PopArt , along with Lichtenstein, and Warhil. Best known for his 1960s series “Great American Nude,” which featured flat figures in an intense palette of red, white, blue, and other patriotic colors, Wesselmann, in an effort to reject  Abstraxt made collages and assemblages that incorporated everyday objects and advertising ephemera. In the early 1980s, he produced his first “Metal Works,” in which he shaped canvases and cut metal to create abstract three-dimensional images. In his final years, Wesselmann returned to the female form in the “Sunset Nudes” series, where the compositions, abstract imagery, and sanguine moods recall the odalisques of Matisse.