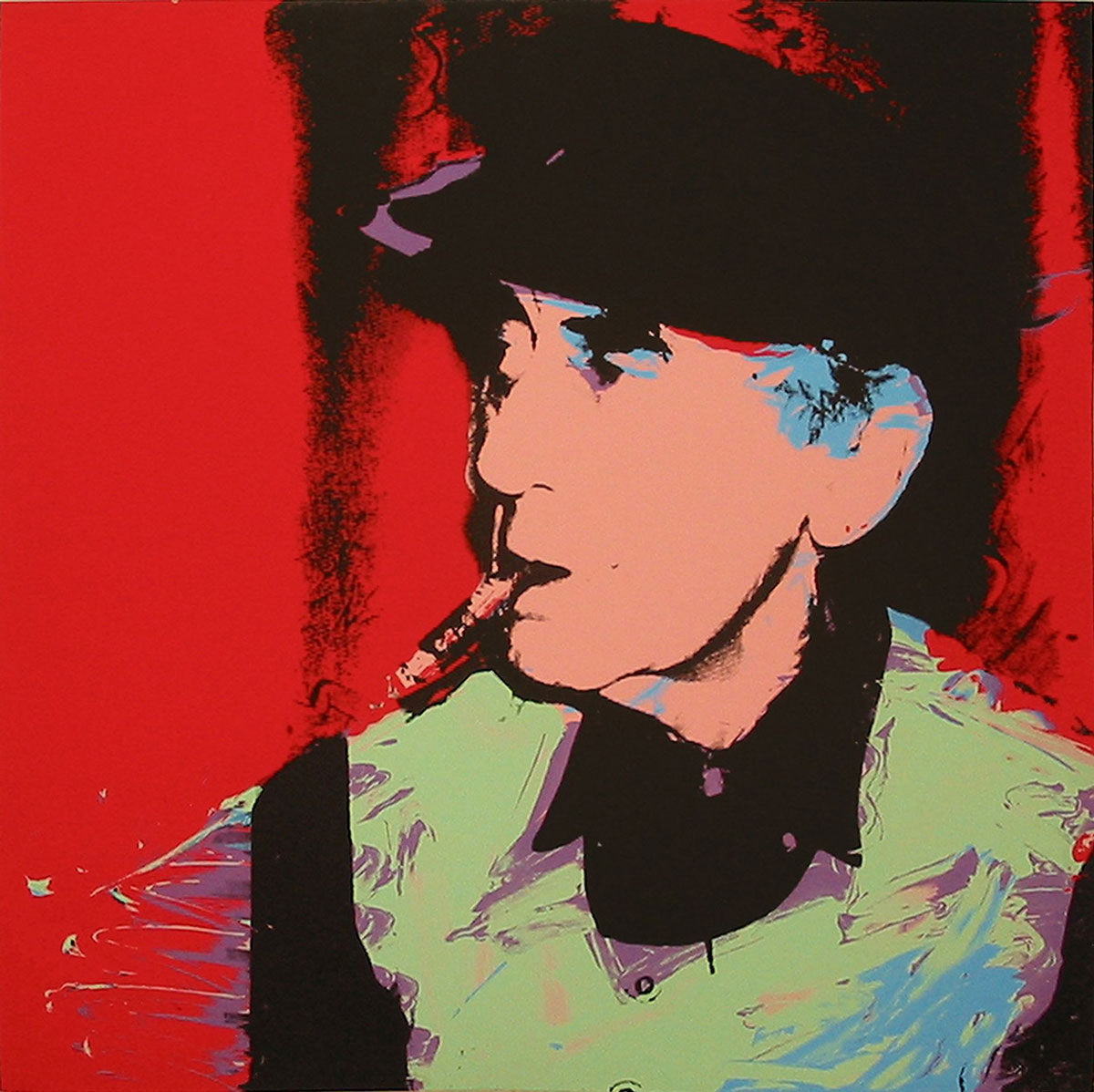 Andy Warhol’s portrait of artist Man Ray, who is celebrated for his contributions to the Dada and Surrealist movements, is one that commemorates Ray for his artistic genius and impact on Warhol’s own development as an artist.

Man Ray was an American modern artist, known for his contributions to the dada and surrealist movements. Towards the later part of his career, Warhol commissioned portraits, which earned him the bulk of his income at the end of his life. His portrait of Man Ray is one of his select portraits that he did not create, because he was commissioned, rather he was inspired by his subject and considered him an influence. His portrait of the artist, who is celebrated for his contributions to the Dada and Surrealist movements, is one that commemorates Ray for his artistic genius and impact on Warhol’s own development as an artist.

The turbulent 1960s ignited an impressive and wildly prolific time in Warhol’s life.  It is this period, extending into the early 1970s, which saw the production of many of Warhol’s most iconic works. Building on the emerging movement of Pop Art, wherein artists used everyday consumer objects as subjects, Warhol started painting readily found, mass-produced objects, drawing on his extensive advertising background.  When asked about the impulse to paint Campbell’s soup cans, Warhol replied, “I wanted to paint nothing. I was looking for something that was the essence of nothing, and that was it”. The humble soup cans would soon take their place among theMarilyn Monroes, Dollar Signs,Disasters, and Coca Cola Bottles as essential, exemplary works of contemporary art.
Operating out of a silver-painted and foil-draped studio nicknamed The Factory, located at 231 East 47th Street, (his second studio space to hold that title), Warhol embraced work in film and video.  He made his first films with a newly purchased Bolex camera in 1963 and began experimenting with video as early as 1965. Now considered avant-garde cinema classics, Warhol’s early films include Sleep (1963),Blow Job (1964), Empire (1963), and Kiss (1963-64). With sold out screenings in New York,  Los Angeles,  and Cannes,  the split-screen, pseudo documentaryChelsea Girls (1966) brought new attention to Warhol from the film world. Art critic David Bourdon wrote, “word around town was underground cinema had finally found its Sound of Music in Chelsea Girls.” Warhol would make nearly 600 films and nearly 2500 videos. Among these are the 500, 4-minute films that comprise Warhol’s Screen Tests, which feature unflinching portraits of friends, associates and visitors to the Factory, all deemed by Warhol to be in possession of “star quality”.

Despite a brief self-declared retirement from painting following an exhibition ofFlowers in Paris, Warhol continued to make sculptures (including the well known screenprinted boxes with the logos of Brillo and Heinz Ketchup) prints, and films. During this time he also expanded his interests into the realm of performance and music, producing the traveling multi-media spectacle, The Exploding Plastic Inevitable, with the Velvet Underground and Nico,

In 1968 Warhol suffered a nearly fatal gun-shot wound from aspiring playwright and radical feminist author, Valerie Solanas. The shooting, which occurred in the entrance of the Factory, forever changed Warhol.  Some point to the shock of this event as a factor in his further embrace of an increasingly distant persona. The brush with death along with mounting pressure from the Internal Revenue Service (stemming from his critical stance against President Richard Nixon), seem to have prompted Warhol to document his life to an ever more obsessive degree. He would dictate every activity, including noting  the most minor expenses, and  employ interns and assistants to transcribe the content of what would amount to over 3,400 audio tapes. Portions of these accounts were published posthumously in 1987 as The Warhol Diaries.

The traumatic attempt on his life did not, however, slow down his output or his cunning ability to seamlessly infiltrate the worlds of fashion, music, media, and celebrity. Andy Warhol paintings soon intersected with all aspects of popular culture, in some cases long before it would become truly popular. He co-founded Interview Magazine; appeared on television in a memorable episode of The Love Boat; painted an early computer portrait of singer Debbie Harry; designed Grammy-winning record covers for The Rolling Stones; signed with a modeling agency; contributed short films to Saturday Night Live; and produced Andy Warhol’s Fifteen Minutes and Andy Warhol’s TV, his own television programs for MTV and cable access.  He also developed a strong business in commissioned portraits, becoming highly sought after for his brilliantly-colored paintings of politicians, entertainers, sports figures, writers, debutantes and heads of state. His paintings, prints, photographs and drawings of this time include the important series, Skulls, Guns, Camouflage, Mao, and The Last Supper.