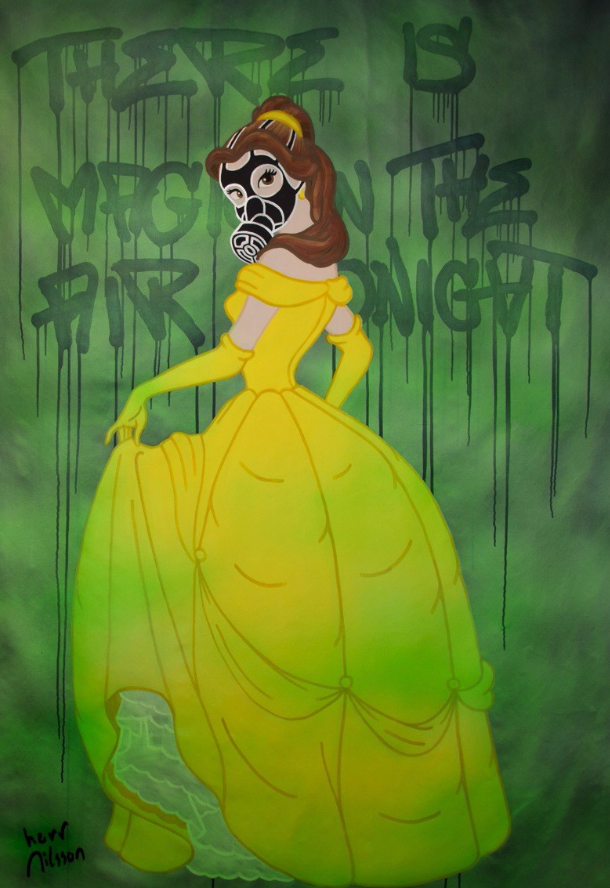 Magic in the Air by Herr Nilsson

In the Dark Princess series, Herr Nillson stages his characters in the real world through his street murals. The dichotomy between good and bad is played through the idealized image of gender stereotypes. Nillson places princesses in the position of grace and authority.

Magic in the Air by Herr Nilsson

Under the pseudonym Herr Nilsson, the anonymous Swedish artist is known to incorporate Disney imagery while combining satire, humor, and critique. Nilsson’s paintings often juxtapose conflicting images in a satirical yet humorous way.

He is best known for editing the graphic identity of lovable Disney princesses and characters, who can be spotted around the city waiting to pounce on unsuspecting pedestrians with an array of weaponry. The deftness of his paintings reveal his talent while the power of his imagery suggests a moralizing sub-text.

“The Dark Princesses are a comment on violence, but they are also a comment to how we look upon good and bad in the world. Everybody expects a fairytale princess to always look good and behave well. If I was one of them I would revolt after a couple of days. And in my world they do,” says Nilsson. Magic in the Air by Herr Nilsson demonstrates the deftness of his painting reveals his talent while the power of his imagery suggests a moralizing sub-text.