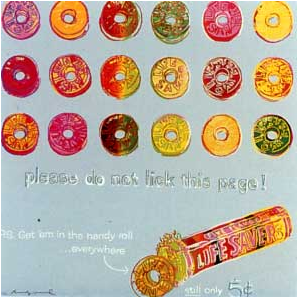 Life Savers from Andy Warhol’s Ads series. The Ads Portfolio of prints by Andy Warhol is one of his most sought after and iconic sets of prints. This Andy Warhol portfolio includes images of James Dean and the iconic Paramount logo . The Ads portfolio is made up of ten screen prints on Lenox Museum Board by Andy Warhol.

A skilled social networker, Warhol parlayed his fame, one connection at a time, to the status of a globally recognized brand. Decades before widespread reliance on portable media devices, he documented his daily activities and interactions on his traveling audio tape recorder and beloved Minox 35EL camera.  Predating the hyper-personal outlets now provided online, Warhol captured life’s every minute detail in all its messy, ordinary glamour and broadcast it through his work, to a wide and receptive audience.Building on the emerging movement of Pop Art, wherein artists used everyday consumer objects as subjects, Warhol started painting readily found, mass-produced objects, drawing on his extensive advertising background.  When asked about the impulse to paint Campbell’s soup cans, Warhol replied, “I wanted to paint nothing. I was looking for something that was the essence of nothing, and that was it”. The humble soup cans would soon take their place among the Marilyn Monroes, Dollar Signs,Disasters, and Coca Cola Bottles as essential, exemplary works of contemporary art.