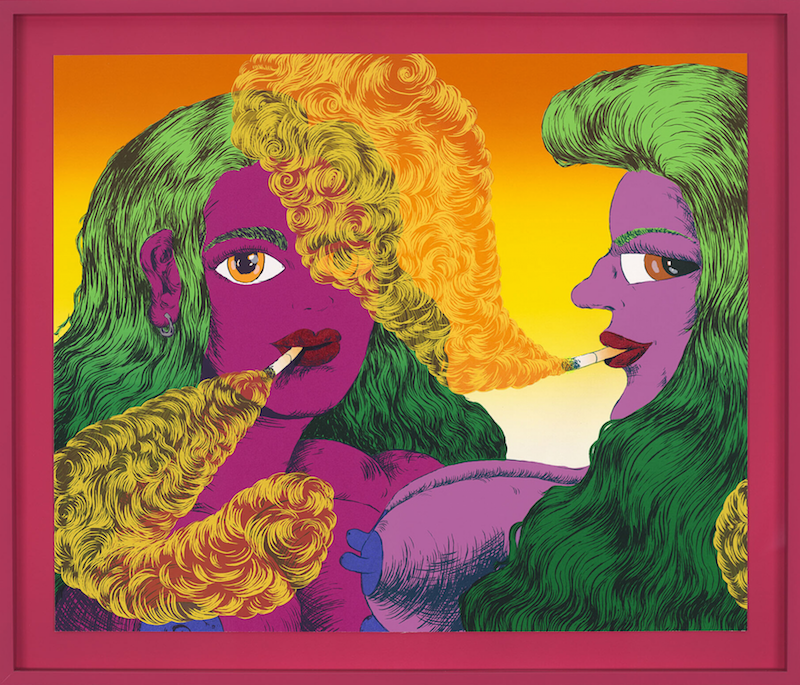 Ana Benaroya (born 1986) depicts female bodies that push against gender and societal norms. Their intensely colored figures are bursting with energy, their exaggerated muscles and breasts refusing to be contained as they dissolve the binary between the male and the female form. In a world devoid of men, their sensuality is their own and they know how to flaunt it for themselves and on their own terms. They capture the intensity of lesbian desire, projecting confidence in the way they hold their bodies and engage the viewer.

Benaroya has long been fascinated by the superhero-esque male body that dominated the comics of her youth and she continues to draw on the legacy of comics and caricature in her work, citing artists like Peter Saul, Carroll Dunham and Tom of Finland as inspiration. She is keenly aware of the subversive power of humor and toes the line between funny and serious in her depictions of violence, sexuality and desire.

Ana Benaroya received her BFA from Maryland Institute College of Art and her MFA in Painting from Yale University. She has been the subject of solo exhibitions at Venus Over Manhattan, New York; Carl Kostyal Gallery, London; Ross + Kramer, New York; and Richard Heller Gallery, Los Angeles, among others. Benaroya’s work can be found in the collections of institutions such as the Institute of Contemporary Art, Miami; Pérez Art Museum, Miami; The High Art Museum, Atlanta; and the Zuzeum Art Center, Riga.