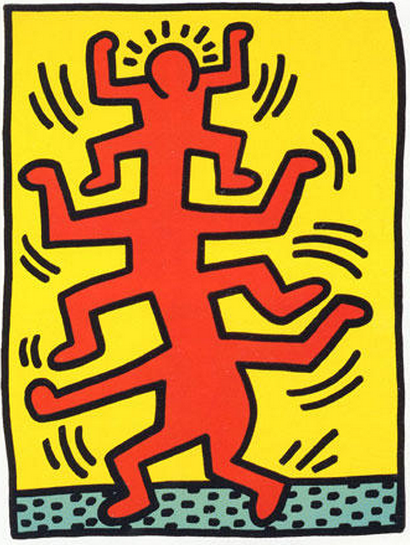 Growing #2 is known as a “People Ladder” and represents a tower of beat box dancers in a formation.  It’s one of Haring’s most known images, alongside the radiant baby, barking dog and angels.

Keith Haring sought to democratize art and enable growth through the rights and activism he portrayed through his work. In the Growing series, the figures represented stem from the single individual. Growth represents the artist’s desire to emerge from societies withheld value system in gender, class, race, and sexuality.

Keith Haring’s 1988 series titled Growing is a collection of 5 screen prints. Keith Haring is recognized for his exclusive use of black and white, and typical use of primary colors, the figures were simplified, and easily recognizable as his. They formed glyphs that could be read, like an urban, tribal language.

The Growing suite works all focus on a central figure from which the image expands.  They reference historical tribal art and aboriginal styles, but the form and design is completely Haring’s own.  Haring was a visionary – he created what are the equivalent to modern day hieroglyphics.  Referencing what is essentially another visual language is genius and fitting.  Haring captures the best of the era here too – the 80s, the birth of hip hop.

Each of these is a handmade work by the artist himself.  He poured himself into the production of the works, creating the screens from which these were printed, and here choosing the specific color combinations that make these unique from any other in the world.  Speaking of color, the ink on these is super fresh – bright, vibrant and an incredible display on the wall.