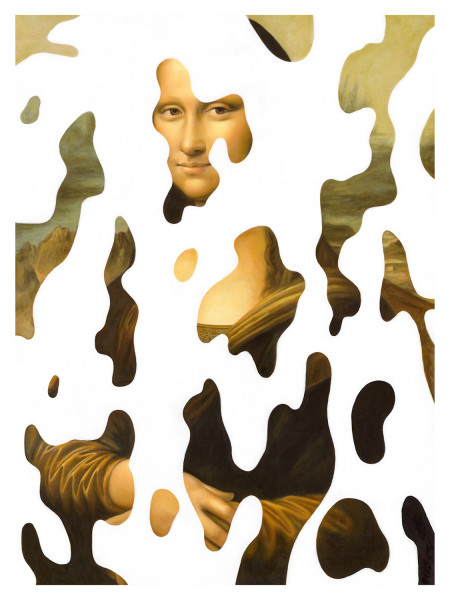 The Outsourced series is a modern reinterpretation of old master paintings using original materials and methods. The series has become Alva’s very own Masters in Art History. “It’s been in the works and under research for about three years, but this last year I really kicked it off. Aside from the painting itself, my favorite part has been these forced collaborations between dead masters that never would have happened back in those days. For example “Sleeping with the Fishes” has Da Vinci, Rembrandt and Van Gogh all in one.” – Dan Alva

Born in 1984, American artist Dan Alva comes from a Spanish background of fine artists. Based in Miami, Alva’s works are a hybrid of mixed-media, sculptures, and paintings, often with subversive undertones. Alva has been working as a creative in Advertising for over 15 years, which is how his Brandalism Series came to fruition. Alva is revealing the truth behind the industry by stealing other brands’ advertisements.

Words and phrases are superimposed on the prints, and acrylic spray cans are then punctured and allowed to explode freely onto the advert. Alva’s latest Outsourced Series is a re-interpretation of old master paintings using original materials and methods with a modern approach. He also has work in the New Museum of New York and The Museum of Modern Art’s permanent film collection.