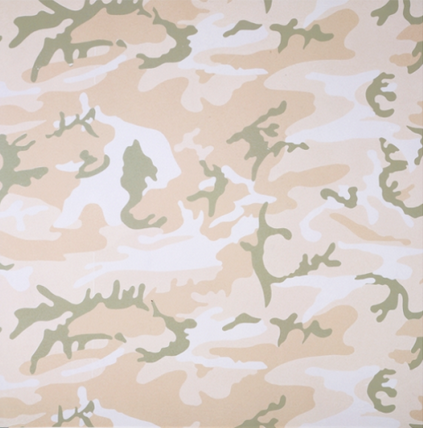 This portfolio created by Andy Warhol contains eight screen prints on Lenox Museum Board of different variations of camo. Camouflage gave Andy Warhol the opportunity to work with bot an abstract pattern and an immediately recognizable image, rich in associations. Unlike military motifs, Andy Warhol’s camouflage paintings reflect bright synthetic and inorganic colors, which would not provide a veil or disguise in any landscape.

Warhol also collaborated with the fashion designer Stephen Sprouse to create a line of camo clothing. This apparel brought the association of war into high fashion: women dressed in camouflage gowns did not blend in, but instead attracted attention in urban settings.