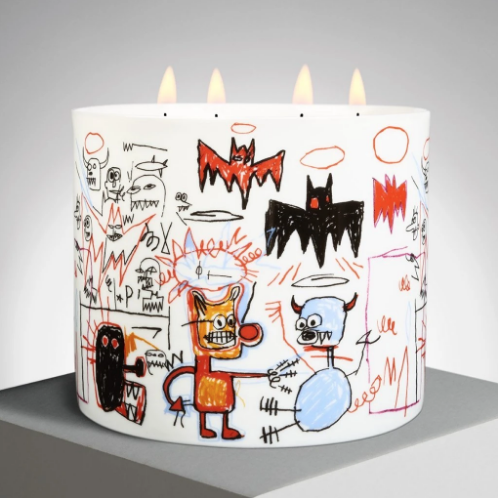 Jean-Michel Basquiat (1960-1988) was a prominent Brooklyn-born painter of Puerto Rican and Haitian descent. He is best known for his primitive style,  his collaboration with pop artist Andy Warhol, and his part in SAMO (an informal graffiti duo based in the Lower East Side of Manhattan in the late 1970s). With a Haitian-American father and a Puerto Rican mother, Basquiat’s diverse cultural heritage was one of his many sources of inspiration, and he was acutely aware of his marginalized place in the world. As a self-taught artist, Basquiat had begun drawing at an early age on sheets of paper his father, an accountant, brought home from the office.  His mediums ranged from poetry, drawing, and painting, often including text, abstraction, figuration and historical information into his art.

Basquiat first began working with a close friend, they tagged subway trains and Manhattan buildings with cryptic aphorisms. In 1977, Basquiat quit high school and went on to sell sweatshirts and postcards featuring his artwork on the streets of New York. In 1980, his work was featured in a group show and he received critical acclaim for his ability to distill the world around him through his unparalleled fusion of words, stick figures, and animals. His paintings came to be adored by the public.

The expressive style of his work not only associated him with the street art of Keith Haring but also the Neo-Expressionists. His rise to fame corresponded with the emergence of a new art movement, Neo-Expressionism, which ushered in a wave of fresh, young and experimental artists such as Julian Schnabel and Susan Rothenberg.  In the Basquiat collaborated with famed pop artist Andy Warhol, which resulted in a show of their work that featured a series of corporate logos and cartoon characters. Basquiat’s art focused on suggestive dichotomies such as wealth versus poverty, integration versus segregation and inner versus outer experience. He used social commentary in his paintings as a springboard to deeper truths about the individual, as well as attacks on power structures, and systems of racism. Furthermore, he brought the issues of colonization, racial inequality, and representation into his artwork such as “Arroz con Pollo”(1981) and “Hollywood Africans”(1983). The ‘object’ and assemblage also became increasingly important in his work. Basquiat began to alter and remodel everyday objects, such as windows and doors and incorporated them into his art.  He exhibited around the country and the world. In 1986, he traveled to Africa for a show in Abidjan, Ivory Coast. That same year, the 25-year-old exhibited nearly 60 paintings at the Kestner-Gesellschaft Gallery in Hanover, Germany, becoming the youngest artist to ever showcase his work there.

As his popularity skyrocketed, so did Basquiat’s personal problems. By the mid-1980s, his friends became concerned by his excessive drug use. He became paranoid and isolated himself from the world around him for long stretches. Desperate to kick a heroin addiction, he left New York for Hawaii in 1988, returning a few months later and claiming to be sober. Sadly, a few months later, Basquiat died of a drug overdose on August 12, 1988, in New York City. He was 27 years old.

Although his art career was brief, Jean-Michel Basquiat has been credited with bringing the African-American and Latino experience in the elite art world. Basquiat’s art has inspired many in the hip hop music community such as Jay Z.  In 1992, The Whitney Museum of American Art held the first retrospective of his art.