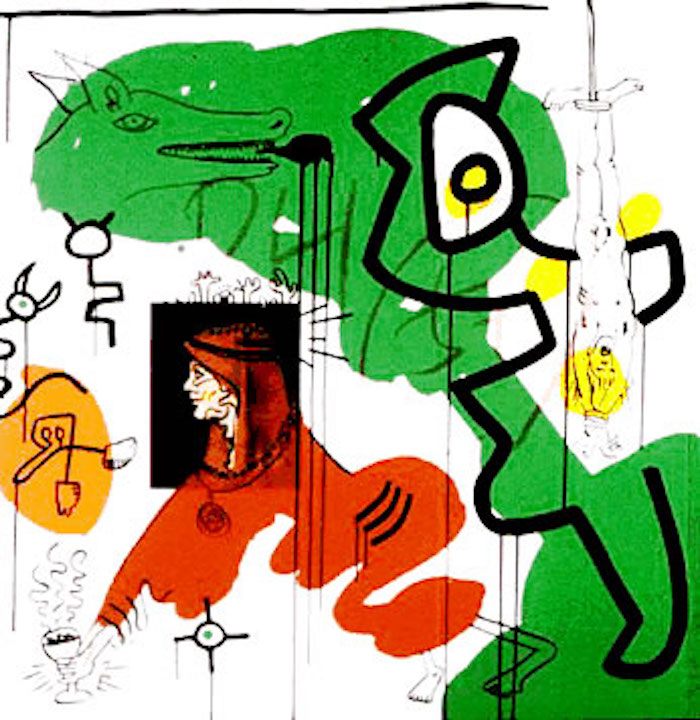 Always politically conscious, Haring used his fame and talent to heighten awareness of AIDS, apartheid and the crack cocaine epidemic, and became involved with several children’s charities. In 1988, shortly after he was diagnosed with AIDS, he collaborated with the Beat writer William Burroughs to create the Apocalypse portfolio. Haring’s provocative imagery and Burroughs’s stream-of-consciousness poetry create a vision of the HIV virus as a harbinger of the end of the world.  He died in 1990.

When the late renowned artist Keith Haring was diagnosed with AIDS in 1988, he collaborated with author William S. Burroughs on this Apocalypse series, which offers an insight into Haring’s personal struggle with the disease.  He died in 1990.

Page 9
Force let it come, skyscrapers scrape rents of the final Apocalypse in the sky, dream rivers splashing color across solid roads and buildings, AMOK art vitality stirring passions of metal blur by writhing in mineral lusts. Walls of glass melt OFF THE TRACK OFF a billion crazed eyes, the sidewalks run feet and tires, chimneys ejaculate blue tunnels break out graffiti village pulled across the sky in flaming colors.