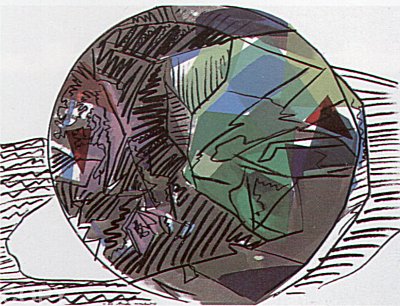 The gems by Andy Warhol series contains four screen prints on Strathmore Bristol paper featuring different variations of gems.Warhol became a collector of jewelry after his success.  Warhol often wore elaborate pieces by Cartier or Harry Winston when he attended parties, which displayed his love for precious gemstones. The series was created in the later years of Warhol’s life.The Gems prints, featuring emeralds, rubies and diamonds, were a series Warhol created late in his life. Recently a German curator put one under an ultraviolet light.  The light showed a fluorescence, a glow.  This discovery was a pleasant surprise to those who know that Andy, himself, was always hiding his own glow, the jewelry, underneath his clothes.  “The Gems series has an autobiographical dimension (the secret love of feminine things, the sadness inherent in having to hide who he really was, despite his wealth and celebrity).”