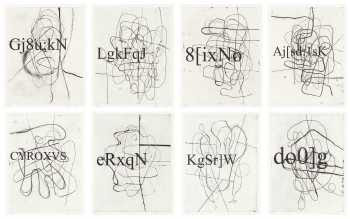 As part of Wool’s practice, he frequently employs large, block, lettering, without strict observation of grammatical correctness. Here, Wool re-envisions language by deconstructing the semantic properties of the words that compose the sentences themselves. His compositions are forceful in their command and formal techniques, which only aid in capturing the emphatic gesture of Wool’s gesture.

Around the same time Christopher Wool was developing his pattern paintings, he began to experiment with using words. Like rollers and stamps, words were preexisting forms that provided a paradoxically freeing limitation to his experimentation. The story goes that his Eureka moment for using language as his subject matter came in the form of a brandnew white delivery truck. Someone had spray-painted SEX LUV across its surface. In a 1987 work on paper, Wool painted exactly these letters using blocky stencils. Wool had long been fascinated by the way words are transformed when “exposed to the cacophony of the city,” writes the curator.9 In graffiti, on billboards, in advertisements, words change in both form and function when they became a part of the urban landscape.

The language in Wool’s paintings is often treated as much as abstract shapes as words with a communicative function. They are not subjected to conventional spacing or punctuation rules. They are fractured; letters are left out. Reading them for meaning can often be like putting together a puzzle. The experience, says the curator, is like learning to read for the first time all over again.