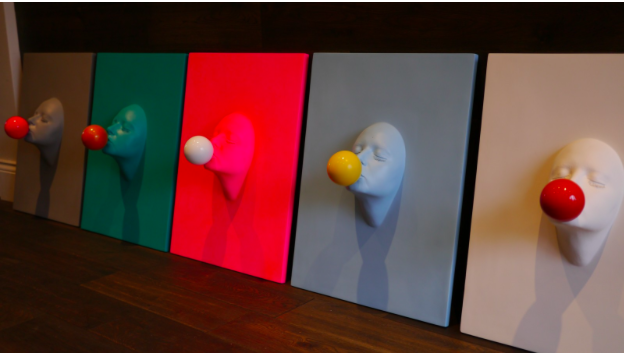 A Bubble (Sculpture) by Schoony

Schoony is one of few artists in the world that use the discipline of life casting as an art form. A Bubble is available single panels, in an array of colors. Each of the panels comes separately.

A Bubble (Sculpture) by Schoony

Schoony ’s background is rooted in special effects and prosthetics for the film industry with his career spanning over twenty five years. Since the age of fifteen he has worked on over a hundred films mostly based in the UK however his work and reputation for high class pioneering techniques has reached far corners of the world; Thailand on Rambo, Morocco on Black Hawk Down and even as far as Australia and New Zealand working on Where The Wild Things Are and at The Weta Workshop.

He took the plunge into a new career as an artist to share his passion for life cast sculpture. Schoony took the London art scene by storm in 2008 at mutate Britain’s one foot in the grove on portobello road with his life cast sculptures ‘boy soldiers’. Since then, his new found career has gone from strength to strength. Schoony ’s Boy Soldier can be seen in KICKASS 2 and ‘Little Favour’ starring Benidict Cumberbatch.

Schoony’s creations were inspired by his work in another life – as Tristan Schoonraad, the special effects and prosthetics expert whose expertise has seen him work on Tomb Raider, Harry, Potter, Rambo, Clash of the Titans and John Carter of Mars.

The pieces were created in his Elstree Film Studios workspace which he shares with his father, John Schoonraad of Lifecast Ltd.

“I wanted to make something alive,” says Schoony whose model was his nephew, Kai whose father, Robin, is also a special effects and prosthetics expert.

“The helmet idea came from my work on Black Hawk Down, the grenades from Saving Private Ryan.

“Sending children to war is horrific and highlighting this injustice is really important to me. My nephew is aged seven in this art piece; the age of some of our soldiers in Afghanistan and Iraq as they would have been ten years ago. It is a future I do not want for my nephew.”