American Artist Roy Lichtenstein (1923-97) was one of the founders of the Pop Art Movement which took inspiration from recognizable imagery, often found in mass media and popular culture to dispute the notions of ‘high and low art’. Lichtenstein is mostly known for his vivid bright colors, strong lines and use of Ben-Day dots, however, throughout his career he experimented with different motifs and techniques such as his more abstract 1980s “Landscape Series”. This series united abstraction with pop art, illustrating Lichtenstein’s in-depth understanding of the history of art, while also representing a visual shift for the Artist, away from the limited range of compositions and styles that defined his earlier work. 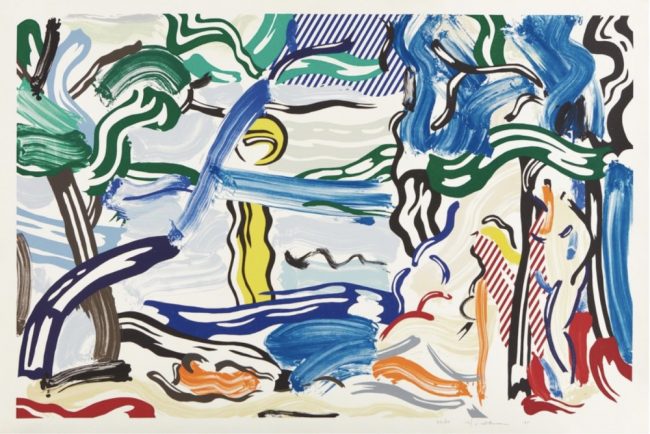 Moonscape From Landscapes by Roy Lichtenstein

Lichtenstein first experimented with the Landscape motif in the 1960s, shortly after his Pop breakthrough. These landscapes were originally appropriated from the backgrounds of comics and cartoon scenes. The series “Ten Landscapes” was his first solo print portfolio, which featured screen prints with photo-collage and drawing, almost resembling landscape scenes from postcards. This work challenged traditional art history and the custom of landscape painting throughout history as Lichtenstein incorporated his bold,  flat and two-dimensional style to these paintings. 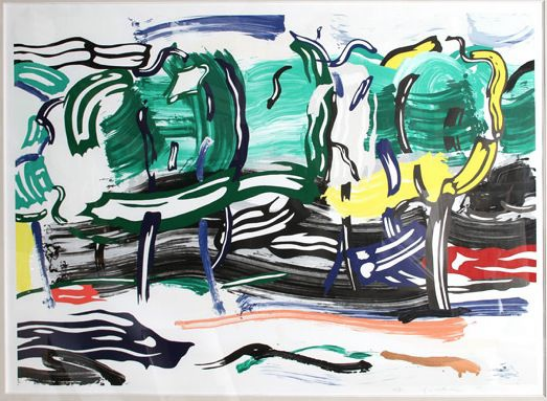 Road Before The Forest by Roy Lichtenstein

In the 1980s Lichtenstein revisited the landscape motif when he collaborated with Gemini G.E.I to create the “Landscapes Series” prints. In this series, Lichtenstein referenced both cartoon and realistic looking brushstrokes, influenced by his 60s “Brushstroke Series”, yet introducing intersecting brushwork. The compositions for these lithographs, silkscreens, and woodcuts were based on paintings by artists such as Van Gogh. “Road before the Forest” and “Moonscape” both use a broad range of colors and hues which differs from his use of the primary colors in his other bodies of work. The impressionist brushstrokes in these conceptual paintings effortlessly depict and represent motifs and symbols such as the sun, sea, and sky to create a distorted landscape with no one clear vantage point. 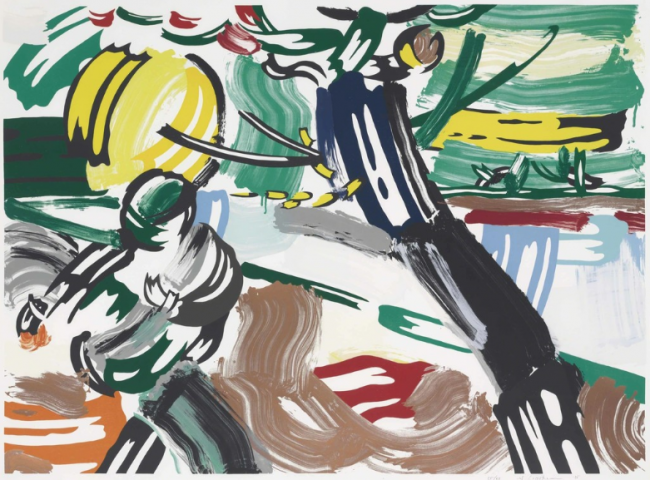 The Sower by Roy Lichtenstein 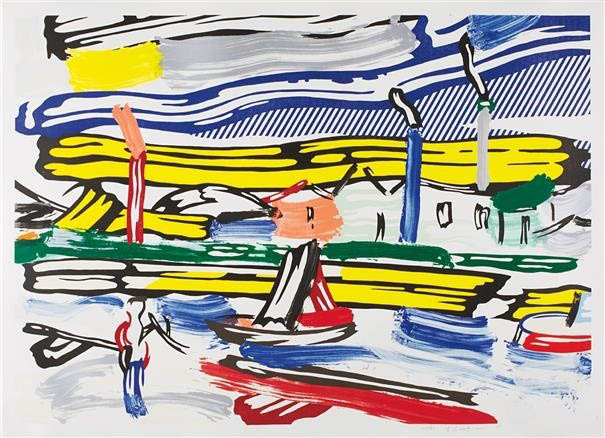 The River, from Landscapes by Roy Lichtenstein

By re-appropriating the traditional motif of the landscape into his unique Pop Art style, Lichtenstein unified these different styles, “I take a cliché and try to organize its forms to make it monumental. The difference is often not great, but it is crucial.” as stated by Lichtenstein.  The exploration of the nature of the brushstroke was crucial to Lichtenstein’s practice, as rather than using brushstrokes as a form of expression, he made them his subject, therefore creating critical thought-provoking meditations on art history, pop culture, and tradition.