Living in a time where critical consumerism is an integral part of an urban lifestyle, the world of Banksy’s consumer-criticising artwork has undoubtedly left a permanent mark across the globe. His satirical work with messages that appeal to the masses have created a massive amount of interest in this mysterious artist every time he hits the “canvas”. As Banksy has maintained his shroud of anonymity, his real prints have become a global commodity. One set of Kate Moss paintings sold in Sotheby’s London, setting an auction record for Banksy’s work. 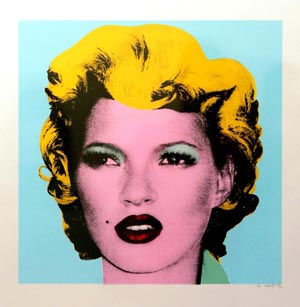 Signed and framed on screen print, Kate Moss by Banksy was created by the artist in 2011 while the world-renowned supermodel was on her honeymoon. The special work was a surprise for the model, which was showcased in her bathroom. A huge fan of his work, Kate Moss has been described as one of the most recognizable faces of her time, appearing on over 300 magazine covers. 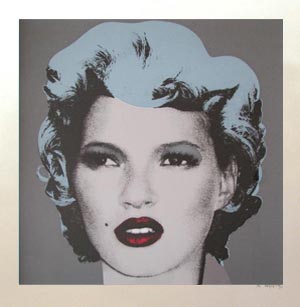 The Kate Moss Collection by Banksy is based on Andy Warhol’s iconic Marilyn Series, appropriates this supermodels’ visage. In a contemporary take on Warhol’s Pop masterpiece, Banksy has superimposed Monroe’s hair onto a gray-scale image of Moss, then stained the portrait with an array of vibrant colors. Banksy says, “even my well-receipted radical punk-ass got sold on auctions, but as long as walls eat my graffiti people buy my art and I keep getting more famous.” It’s nothing more then the best pop-art artists like Andy Warhol have created for us: a post-consumer consumer-culture built on it’s own ironic icons. 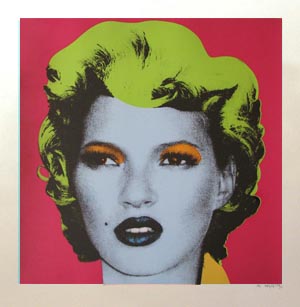 Banksy’s canvas art has been sold to some of the most elite in the world. In addition to his two-dimensional work, Banksy is known for his installation artwork. One of the most celebrated of these pieces, which featured a live elephant painted with a Victorian wallpaper pattern, sparked controversy among animal rights activists. He was the subject of a 2010 documentary, “Exit Through the Gift Shop,” which examined the relationship between commercial and street art.

Guy Hepner Contemporary Art Gallery in New York City is pleased to present the sale of Banksy artwork, prints, canvas, paintings, and a wide range of ‘Choose Your Weapon’ prints and Kate Moss prints. Inquire about prices to buy Banksy art for sale.