“My Easyfun-Ethereal paintings are very layered. My interest has always been to create art that can change with any culture or society viewing it. When I look at the paintings and realize all the historical references, it’s as if, for a moment, all ego is lost to meaning.”

Jeff Koons rose to prominence in the 1980s, a generation commonly referred to as “the decade of greed.” Growing up in a media–saturated world, Koons was one of the postwar artists to apply this commercial mindset to art. He challenges the barriers between popular and elite culture by placing familiar images into abstract forms and out-of-context settings. 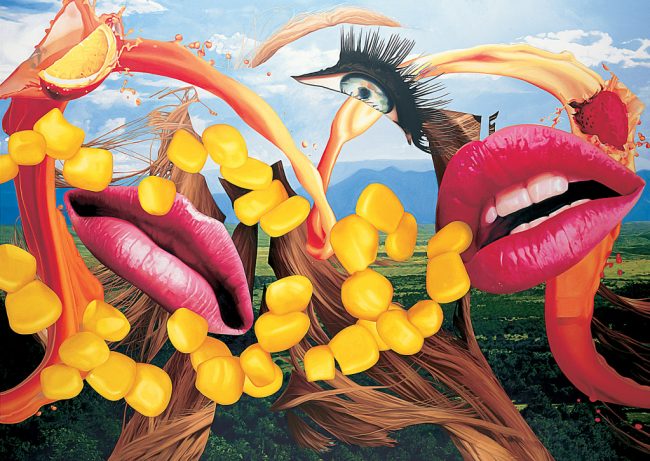 His ‘Easyfun-Ethereal’ series, released in 2000, features computer–scanned images from media clippings and his own personal photographs. The images are arranged in the sweeping grandeur of Baroque paintings and replicated with photorealistic precision. They feature blown–up food products and various body parts, backdropped by picturesque landscapes and swirling closeups. Being exposed to these images everyday, we recognize them as attainable objects to be desired and purchased. Painting them with care and precision in a layout that resembles the more aristocratic periods of art, Koons has successfully stripped them of their original intentions and made the paintings themselves a commodity, rather than the objects. 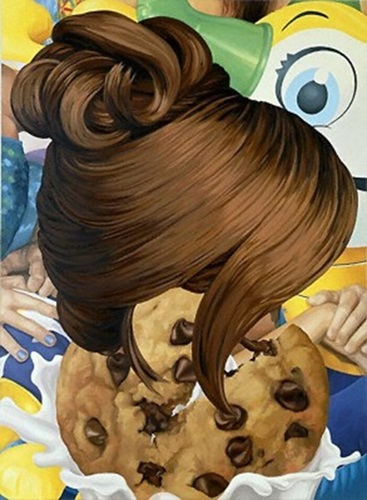 Hair is a layered painting from the series featuring a face formed from a chocolate chip cookie and pristinely styled hair. The anthropomorphic cookie is being gazed upon by a cartoon eye. More realistic hands are situated on either side of the women’s hair and vaguely mimic the realistic style of the Renaissance. Throughout the series, products aimed for children are intermixed with beauty ideals and sexualized images. Koons hints at the inability to separate children from the mainstream culture of consumerism. 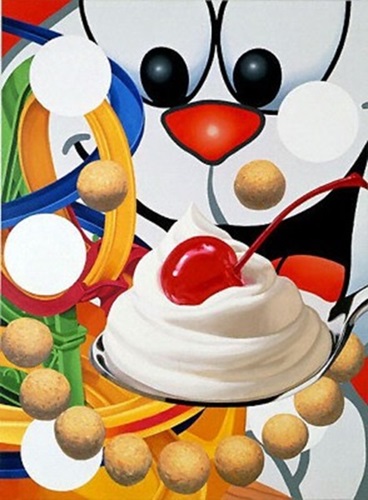 The imagery in Loopy emphasizes indulgence and child–like desire. Cutouts from a kid’s cereal box and a spoonful of whipped topping are combined to show the manic appetite advertising creates. This unhealthy obsession is thinly veiled with positive images like a cereal smiley face and animated graphics. The primary color palette speaks to the subliminal tactics of advertising and its target audience of children.

The “Easyfun–Ethereal” series accentuate themes of eroticism and overindulgence that are so widely used by marketing industries. Koons uses the materials they create to fashion an exaggerated portrait of American culture that is as captivating as it is kitsch. The commercial objects are paired with subtle references to the high art of previous eras, placing advertising on the same pedestal.