Born on 22 December 1960 in New York City, Jean-Michel Basquiat from an early age showed a taste and aptitude for drawing, which he did on sheets of paper his Haitian father Gérard Basquiat brought home from the office where he worked as an accountant. Jean-Michel’s Puerto Rican mother spoke to him in Spanish, words of which he later wrote on some of his paintings, had a deep interest in fashion and the arts, and regularly took him to museums—The Brooklyn Museum, The Museum of Modern Art, The Metropolitan Museum of Art—after which they would draw together.

“I’d say my mother gave me all the primary things. The art came from her, ” the artist would recall later in his career .

“His mother got him started and she pushed him,” Jean-Michel’s father later recalled. “She was actually a very good artist.” She also gave her son an inspired gift. In May 1968, an automobile struck seven-year-old Jean-Michel as he played in the street and put him in King’s County Hospital for a month, where he was treated for a broken arm and internal injuries, and had his spleen removed. To help him over the physical trauma and psychological shock, Jean-Michel’s mother gave him a copy of Gray’s Anatomy, which would turn out to be a wellspring of creativity throughout his artistic career. 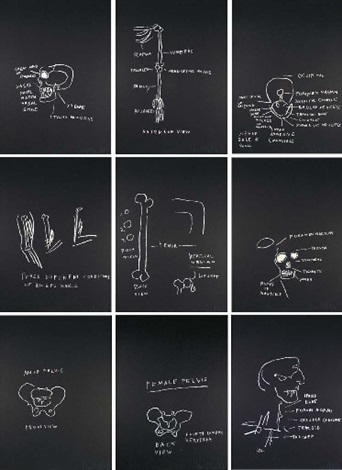 Published by Annina Nosei Gallery, The Anatomy Series created by Basquiat in 1982 – one of the most celebrated years of creative output in the artist’s all too short life and career – depicts 18 separate anatomical configurations of the human body. Originally released as a portfolio, they manifest an obsession. An obsession with the human body, its muscles, bones, and fluids, had been omnipresent in his works almost from the start. 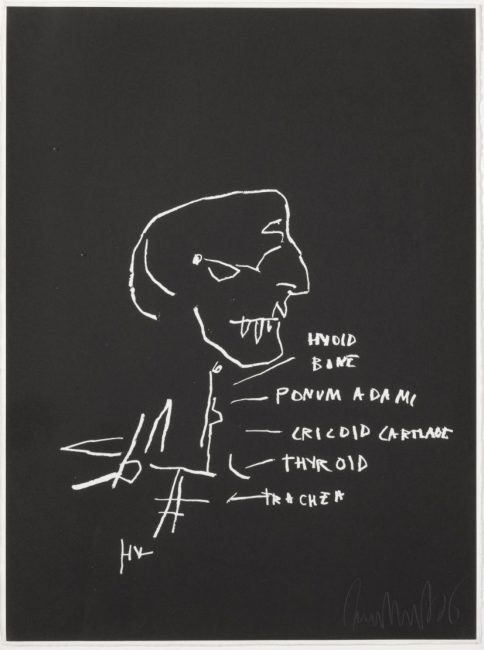 Not completely anatomically correct , the artist has taken licenses in the arrangements of the bones and ligaments . Not that any professional in the medical field wouldn’t be able to recognize the bones objectively but they are not totally correct . For example in Posterior View, Basquiat named the ulnar and radial bones of the arm as part of the same bone when in reality they comprise two separate bones in the human limb . It is unclear whether Basquiat photocopied pages from Gray’s Anatomy directly then added drawings by Leonardo da Vinci and his own creations, however the works from The Anatomy Series came to be they are undoubtedly made in the improvisational style of the artist.

Many years later, when speaking of his beginnings as an artist, Basquiat said: “I was a really lousy artist as a kid. Too abstract expressionist; or I’d draw a big ram’s head, really messy. I’d never win painting contests. I remember losing to a guy who did a perfect Spiderman.”