“50 Cent Piece,” released by The Estate of Jean-Michel Basquiat, is a print based on a work on paper created by Basquiat in 1982-83. The work shows Basquiat’s signature combination of text, images, and diagrams, creating a “stream of consciousness” effect that dissects historical narratives and popular culture of the time. “50 Cent Piece” centers around Marcus Garvey, a Black nationalist leader and political activist from Jamaica. Garvey was famously featured on the fifty cent Jamaican coin. 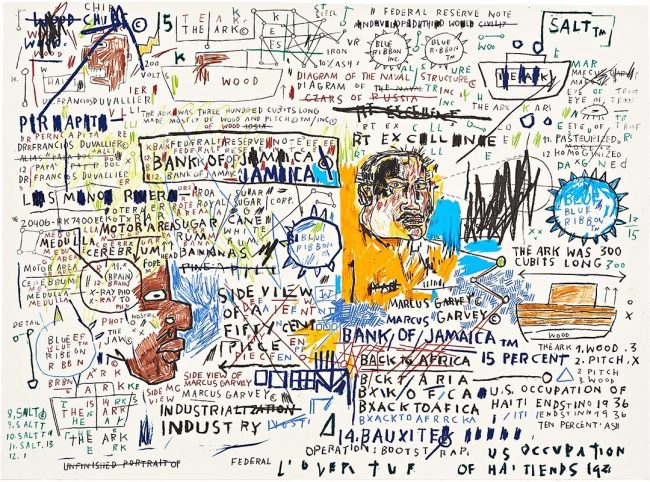 Along with his political work, Garvey was known for his belief that Black Americans needed to be financially independent from white society. Basquiat calls out industries that were especially culpable of slave labor and the exploitation of natives. He lists fruit, sugar, and rum among anatomical terms, referencing the commodification of bodies. Agricultural terms such as “pasteurized,” “homogenized,” and “Blue Ribbon” are also strung throughout the piece. While these terms are commonly applied to food products, their inclusion in the context of the human body and artifacts of Black history makes the compelling connection to eugenics and the slave trade. 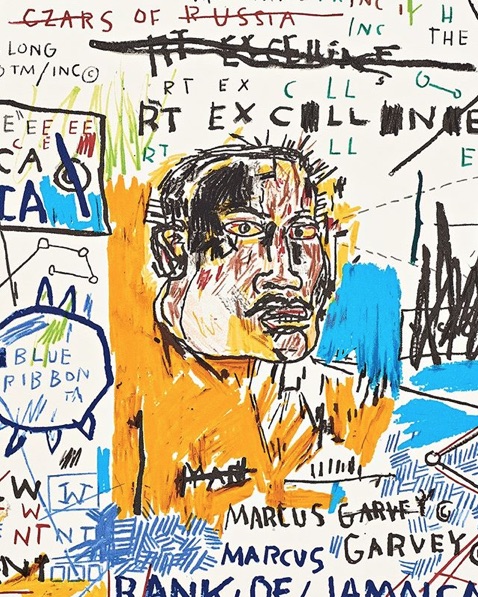 Garvey was also an advocate for the Back-to-Africa movement, contending that those with the purest African-blood should migrate back to the continent and rebuild their own society. Variations of the phrase “Back to Africa” are repeated in the print, adding and retracting letters to distort the message. Basquiat also echoes this movement through iterations of Noah’s Ark, including diagrams, materials, and the actual dimensions that were outlined in Genesis. The parallel can be seen by the idea of migrating and relocating for the sake of humanity and divine obligation. 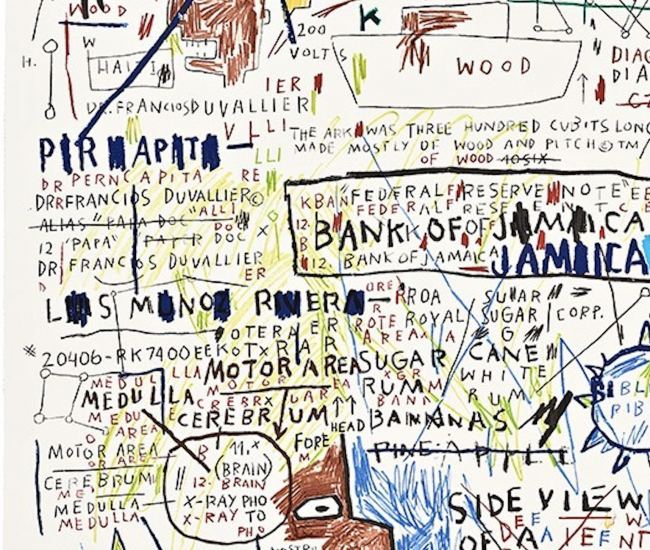 “50 Cent Piece” references François Duvalier, a Black nationalist and Haitian politician, also known as “Papa Doc.” Elected president in 1957, his rule soon became totalitarian, unleashing death squads on any potential opponents or speakers of dissent. Before his presidency, he worked as a physician, adding yet another layer to Basquiat’s inclusion of anatomy and medical terms.

Basquiat once said, “I don’t think about art while I work. I think about life.” In true Basquiat fashion, “50 Cent Piece” offers a closer look at American history and how it’s digested by the young artist. Stringing together seemingly abstract concepts, the viewer is left to their own devices to decipher a common narrative. This posthumous release is stamped and signed by Lisane Basquiat and Jeanine Heriveaux, the artist’s sisters and administrators of the Estate of Jean-Michel Basquiat.⁠