Julian Opie is a contemporary British artist known for his distinctive depictions of stylized figures, portraits, and landscapes, with features outlined in thick black and filled in with flat color, within a wholly contemporary sensibility.

Basing a lot of his work on photographs taken during inspiring trips or during the ins and outs of daily life, Opie’s work is an exquisite digital alteration of both metropolitan and rural landscapes that pushes the boundaries of traditional artistic practice. His images are cartoonish and reminiscent of the symbolic language of computer games and children’s books. He encourages viewers to embark on an endless and hypnotic journey into a stylized representation of our world, sometimes emptied of human presence sometimes overcome by it. 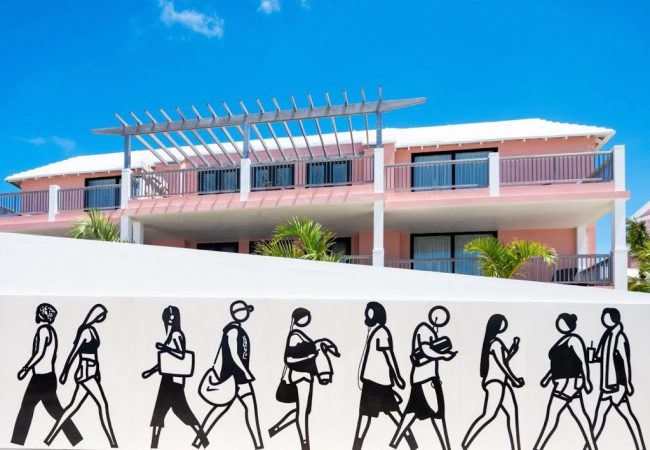 Planning for shows, Opie asks local photographers to set up their cameras in various places and record the passers-by. The photographers send hundreds of photographs but Opie only sets about drawing the best ones. Thinking of striding athletes circling ancient Greek vases and stone-carved Roman friezes of battling warriors Opie gets to work. Some 60 drawings later he has a palette of characters and uses them in a range of paintings and sculptures. Each one throws up surprises and opportunities that the artist himself could not invent – a tattoo or a tasseled dress, a goatee, or the logo on a T-shirt. By making groups of 6 walkers, Opie can get a street crowd and a list, a kind of fashion parade. The random positions of striding legs and pumping arms slice up the space, while hair and phone cables and shoelaces flick and bounce. Sporting clothes and equipment become the modern equivalent of the armor of the past .

The photographed moment was random and fleeting but by cutting the drawing from a thick, black card – by carving it permanently – it slows down and solidifies. Random decisions such as wearing a striped top or swinging a bag or water bottle become solid decisions and materials that you can run your finger over. Opie often sends assistants out to parks to film people walking and on reviewing the films focuses on joggers running past the camera . Humans are built for running . They can outrun a wolf or a horse over long distances. By drawing one stride with around 30 frames Opie can set a drawing in motion to run smoothly forever as an animation. By grouping a few joggers together in a painting he can create a dynamic, complex composition with implied movement. A second later and the runners would have moved on and the composition , so carefully planned , would be changed and lost . 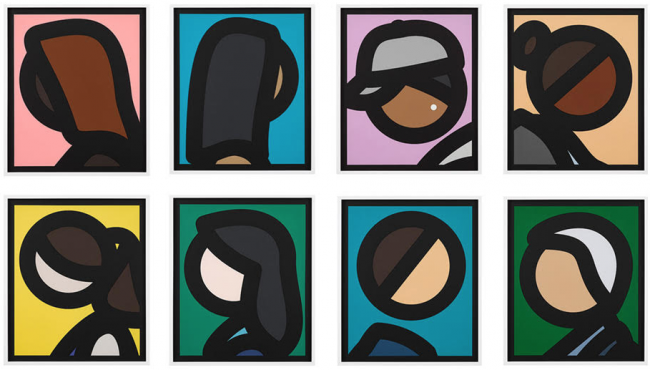 Anything and anywhere is visible but beauty means that we can hold it in our eyes, take a picture of it. These colors surround us and fill our eyes, creating an environment, a space to be in that echoes the colors and shapes on our retina. We use pictures all the time in order to navigate and interact and it’s how we know we are present. By putting that picture back out into the world, on the cave wall or website, or gallery, we can extend, record, and play with what we see. By looking at that picture there is a doubling up of the process, a view of a view.