In 1965, Damien Hirst was born in Bristol, England. He grew up in Leeds before moving to London in 1984. He worked in construction before studying for a BA in Fine Art at Goldsmiths college from 1986 to 1989. He was awarded the Turner Prize in 1995.

Hirst went on to become one of the most provocative artists of the late 20th century. He gained notoriety for his exhibits showcasing rotting or preserved animals, citing death as a central theme to his work. However, his most recognizable pieces can be found in his series of spot paintings consisting of over 1,000 pieces produced by hand, but with machine-like precision and uniformity. 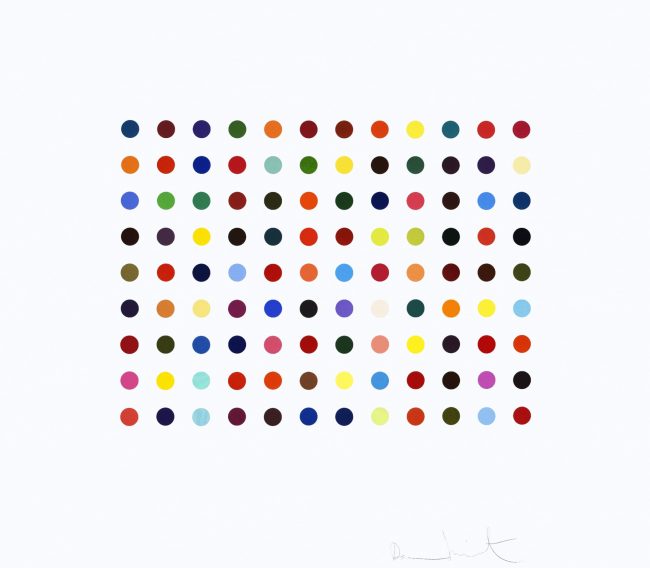 Coming from a Rothko background, Hirst was told to “paint how you feel” – a principle that began to fail him when he entered Goldsmiths. He explains, “I was trying to scientifically reduce that urge into something…Thinking of a sort of unemotional machine that makes paintings. Trying to place all those expressive decisions made about color into a grid to create a system where you could just paint how you feel because in the end, it is pointless. It doesn’t matter how you feel, they always come out happy.” The paintings took on a specific formula: The spots must be uniform in size, hand-painted in a perfect circle, and positioned in a grid. Every spot in a piece is almost always a different color, and black is sparingly used.

Initiated in 1988, the ‘Pharmaceutical’ paintings are the first and most prolific of the spots sub-series. Hirst used the Physicians’ Desk Reference, a commercially published compilation of prescribing information on prescription drugs, to name the individual paintings. He explained later it was the purchasing of this book that compelled him to name the series after the seemingly endless list of pharmaceuticals. 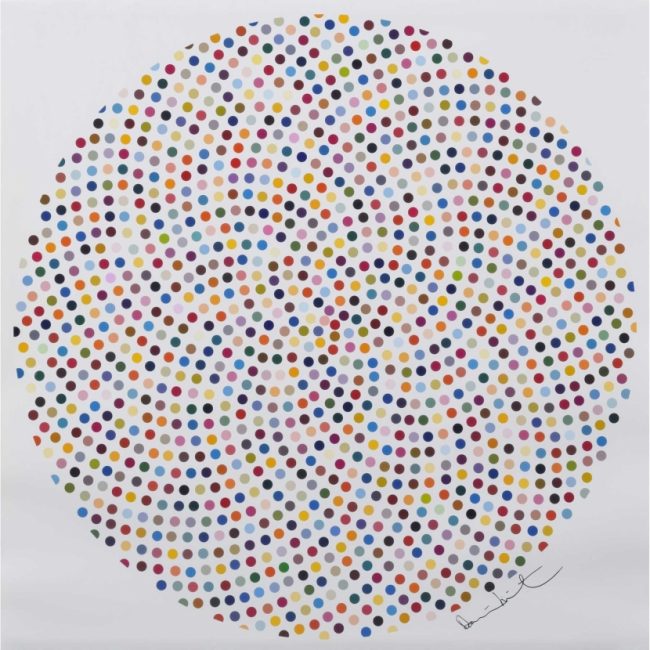 Their titles may have been an afterthought, but the spot paintings’ themes of conformity and infinite scalability match well with the chemical compounds. It opens a larger discussion on prescription drugs and how they function to correct an imbalance. The spot paintings are known for consistency, but we see breaches of this in the ‘Pharmaceutical’ series. When confronted with pieces like S-Lactoylglutathione, we are left to examine our own reactions to nonconformity. 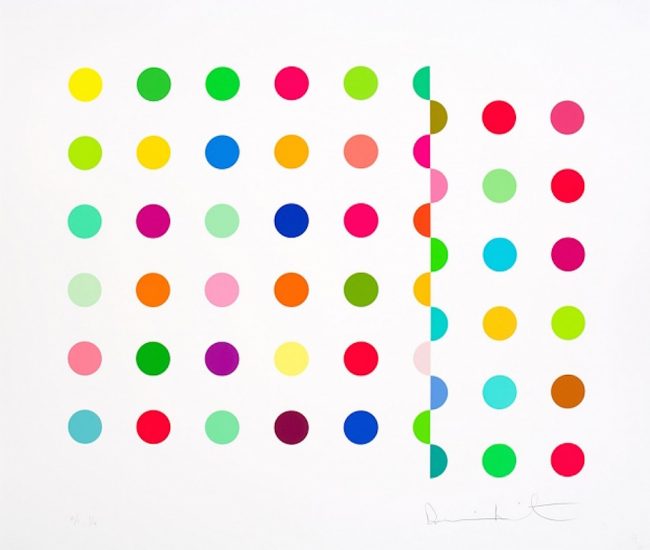 The simplicity of the paintings leaves room for interpretation (and criticism), but to look at their creation reveals a deeper search for the artist’s relationship with color. Hirst explains, “To create that structure, to do those colors, and do nothing. I suddenly got what I wanted. It was just a way of pinning down the joy of color.” In the spot paintings, he was finally able to find an art form not reliant on “already organized elements.”

While technology was created to mimic human behavior, the spot paintings are an artist’s response to reverse the system and replicate machinery instead. Art is reduced to color on a canvas – endless combinations formulated to have the same result. Stripped to their foundation, the colors in the spot paintings are able to stand out and coexist in perfect balance.