Damien Hirst: Back to Basics

Damien Hirst: Back to Basics

British conceptual artist, Damien Hirst is known for his controversial take on the relation between art, life, and death. Hirst’s work regularly investigates and disputes contemporary belief systems, and analyzes the anxieties and ambigutiy of humanness. More recently, Hirst focused on the formal qualities of art and was inspired by his older series “Spot Paintings” that began in 1986, as well as being greatly influenced by the Pointillist and post-Impressionist painting techniques.  Hirst created his series’  “The Veil Paintings”(2018) and “The Colour Space”(2018) which responded to his previous works and examined color, the relationship between colors and its effect on the eye. 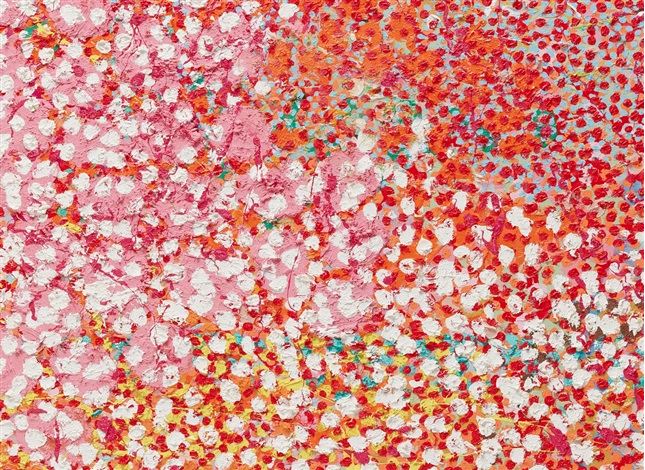 “A veil is a barrier, a curtain between two things, something that you can look at and pass through. It’s solid yet invisible and reveals and yet obscures the truth, the thing that we are searching for”. —Damien Hirst. 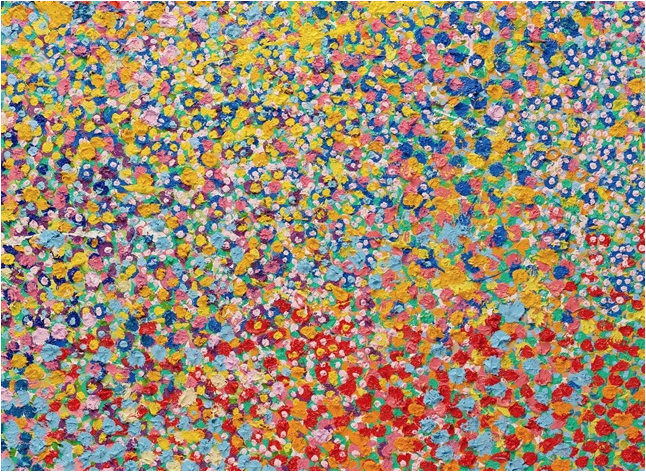 “The Veil Paintings” series comprises of 24 brightly colored, abstract artworks. Hirst clarified that for him the Veil Paintings “are about now, about something energetic forming, like planets or ideas, they are about growth.”. The unusual accessibility and gentleness of these works set them apart from a lot of Hirst’s other work. For example, in these works, there are no glass walls, no medical connotations, and no dead animals. There is a canvas, with paint and conceptual spots of colors. Hirst establishes that he wants these works“to feel like you’re looking through a sheer curtain at something patterned in a colorful, complicated garden beyond, and both the curtain and the garden are moving and work with each other and against each other.” These paintings are definitely a lot to take in, but once engrossed, the viewer can admire their chaotic power and can draw similarities to Manet’s Impressionism and Seurat’s pointillism as well as to Hirst’s older “Spot Painting” works. 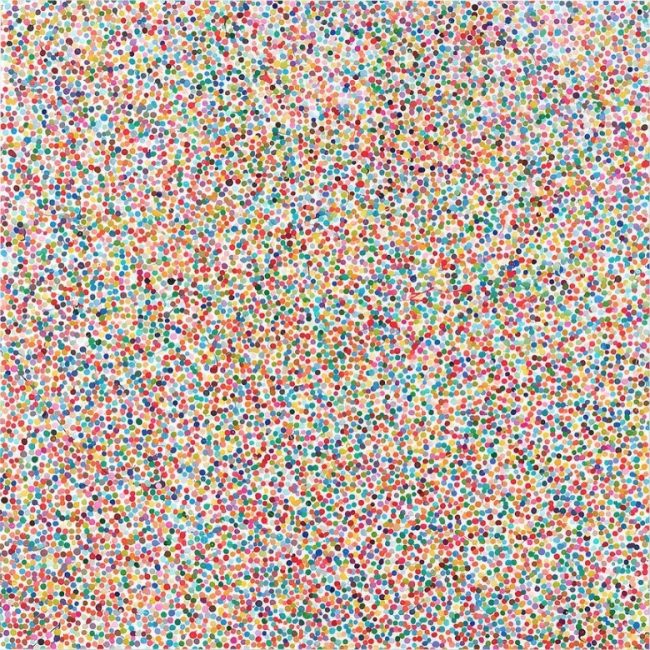 “The Colour Space” series is a new body of work influenced and inspired by his original  “The Spot Paintings” which first made Hirst famous in the 1980s.   Back then, he reveals, the spots were to be uniform, orderly, cold and mechanical as he wanted “to make them look like they were made by machine, not a person.“. After approximately 30 years of paintings spots impeccably, Hirst became somewhat detached from the work.  As Hirst recalls, “My first ever Spot Painting was loose and painted with drippy paint and not minimal at all. In that painting, I was wrestling with what I originally thought of as the coldness of Minimalism and the more emotional Abstract Expressionist painting style I’d grown up with…I’ve felt really drawn to that first painting and knew I’d revisit it eventually.” The dots are not perfect in the Colour Space series, rather, they are dynamic and spontaneous, associating to his first Spot Painting. 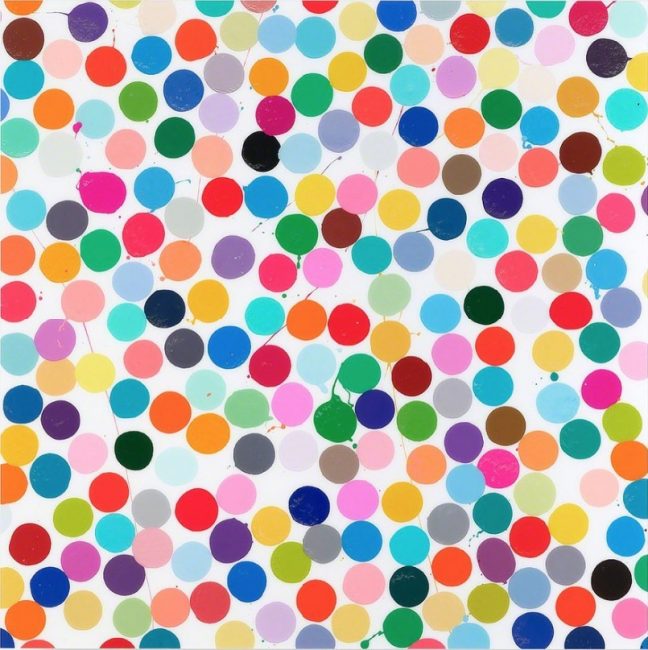 “The Spot Painting” series was initially created as an ongoing and endless series, whereas “The Colour Space” paintings are a finite body of work. To the viewer, these paintings appear looser, more flexible and relaxed.Furthermore,  Hirst also took inspiration from his“Visual Candy” series of the early 90s to create the  “The Veil Paintings” , whereas “The Colour Space” paintings reveal the interaction and relationship between the orderly and the painterly, the rational and the expressive. Each artwork in Colour Space series varies in size and interestingly, there are no two exact colors that repeat themselves in each painting. The work feels honest, raw and authentic. The dots overlap and the paint splatters illustrating the impulsivity of this work. There is uniqueness in each and every one of the paintings. 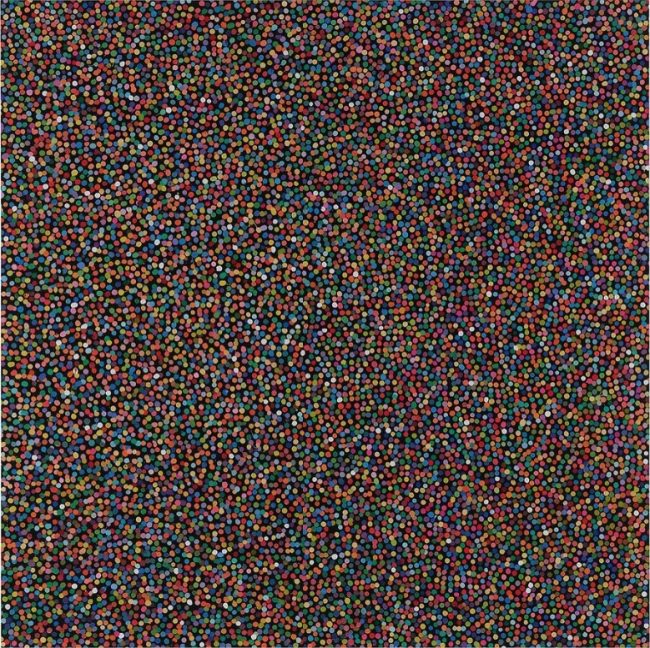 “Colour Space is going back to the human element, so instead you have the fallibility of the human hand in the drips and inconsistencies. There are still no two exact colors that repeat in each painting, which is really important to me. I think of them as cells under a microscope.”—Damien Hirst