Connecting the Dots: From Seurat to Hirst

For over a century artists have actively been experimenting with the use of dots in their works, both as technique as well as subject matter. Starting with Georges Seurat’s A Sunday Afternoon on the Island of La Grande Jatte (1886), which is exclusively made up of thousands of minute dots of vivid color, and going all the way to Damien Hirst’s ‘Veil Paintings’ shown for the first time in February 2018 in Los Angeles; dots have been a recurring topic in art that spans countries, mediums and artistic movements. 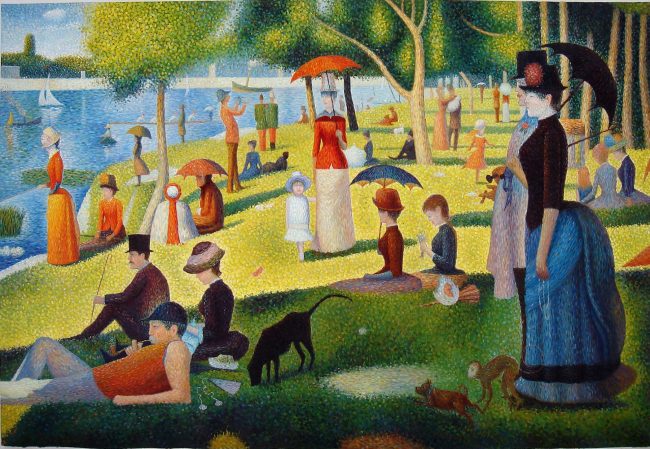 Pointillism, and Seurat’s work, was based on color theory and the idea that if you place many dots of complementary colors next to each other the human eye will blend them together, thus generating the image and desired color in one’s mind. While not 100% accurate when it comes to painting, color theory has been explored by many different artists and reinterpreted to generate different effects on canvas as well as in sculpture. Roy Lichtenstein is probably the most well known artist to employ dots in his work. Specifically, the American Pop Artist used Ben-Day dots to create his iconic comic book inspired paintings that poke fun at the American modern day iconography while simultaneously elevating it. 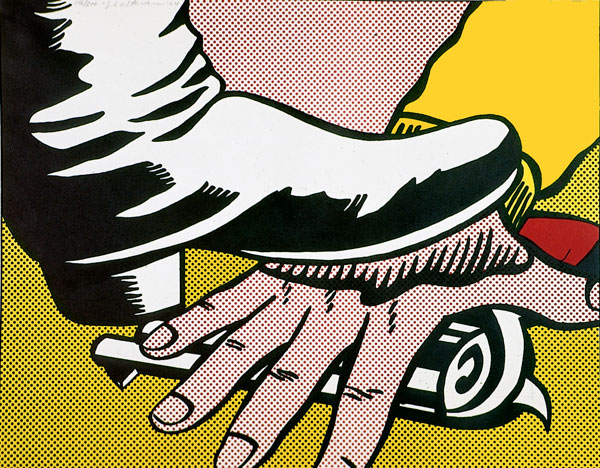 The Ben-Day dot technique was created as a cheap way to achieve a wider spectrum of color for printed material that only uses the four printing process colors (cyan, magenta, yellow and black). The process spaces out the dots at different intervals to create the perception of tones, much like what Seurat wanted to achieve. Unlike Seurat though, Lichtenstein does not aim for the human eye to blend his dots together, rather he confines them within bold black outlines, blocking them apart from each other. Furthermore, in the process of blowing up the comic book images to create his paintings he spaces the dots out even more, making them a major aesthetic component of the work and a reference to modern technology instead of its by-product. 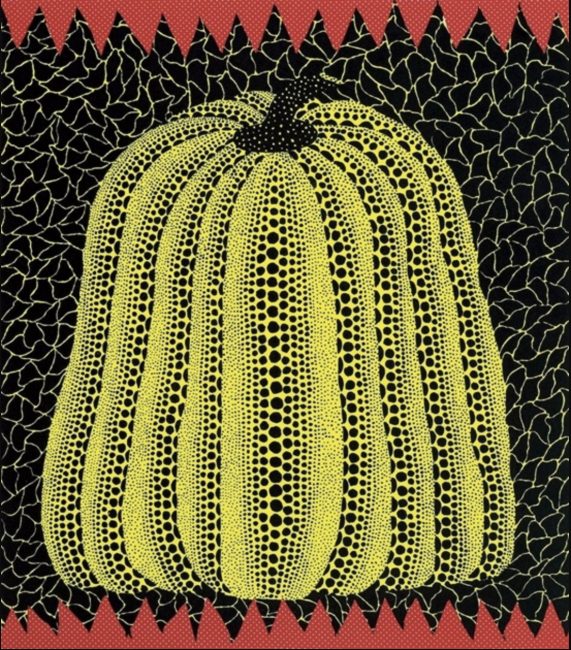 Contemporary artists such as Damien Hirst and Yayoi Kusama have also been experimenting with polka dots in their work, albeit in very different ways. Kusama, who has struggled with mental health issues her entire life, uses the repetition of the polka dot motif throughout her body of work as a form of therapy. “A polka-dot has the form of the sun, which is the symbol of the energy of the whole world and our living life, and also the form of the moon which is calm, round, soft, colorful, senseless and unknowing. Polka-dots become movement…they are a way to infinity” she explains. 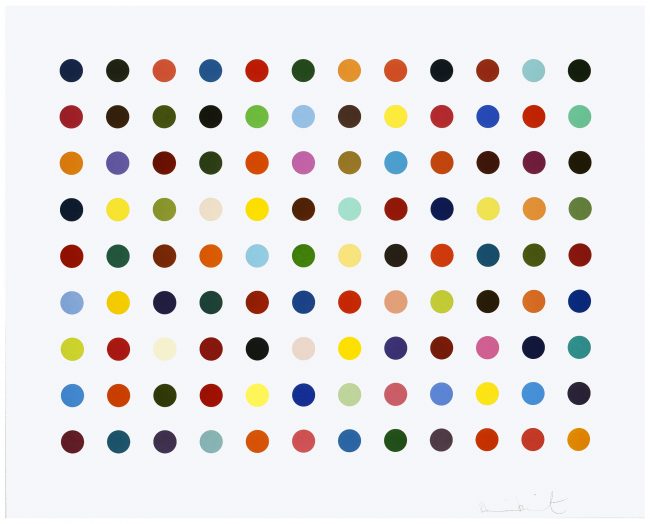 Compared to Kusama, Damien Hirst’s approach to polka dots, or spots as he prefers to call them, is much more mathematical. He began creating the spot paintings as a way to pin down the joy of color. In these career-spanning works Hirst eliminates the visible artist hand in an attempt “to find the harmony of where color can exist on its own, interacting with other colors in a perfect format.” Any problems he had previously had with color, Hirst claims, were removed by the perfect arrangement of complimentary, yet never repeated, colors in the spots.

Guy Hepner is pleased to offer a selection of works by Damien Hirst, Yayoi Kusama and Roy Lichtenstein among other artists who have reinterpreted the polka dot.