Christopher Wool: The Abstraction of Text

Christopher Wool (born Chicago, 1955) is one of the most important artists to emerge from his generation. He moved to New York City in his twenties and started to appear in the art circuit in the 1980s. He quickly gained notoriety through his experimentations with the act of painting and the revisiting of 2-dimensional work in a time when the medium of painting was seen as irrelevant and passé.

Wool’s oeuvre has evolved greatly over the years, bringing together abstract work, text based pieces as well as photography. While he is always looking forward for new inspiration he is also consistently drawing from the past. He combines aspects inherited from Abstract Expressionism (painterly gesture), Pop Art (the use of silkscreens and the influence of street culture), as well as Conceptual art (the use of language). At his core Wool has always been approaching the same question throughout his career – that of how a painting or picture can be conceived, realized and experienced and all that comes in between. 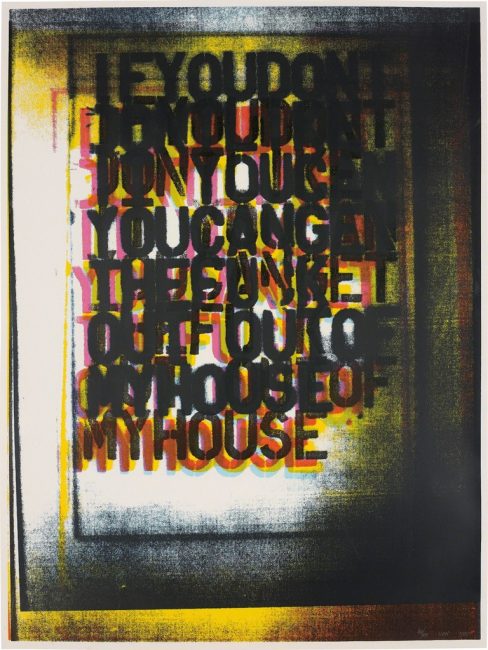 Today, he is most well know for his large scale paintings of words or phrases that have become regular lots at evening auction sales as well as being part of some of the most important contemporary art museum collections across the globe. He takes inspiration from daily life and pop culture using advertising slogans, lines from movies and tv shows or other recognizable material in his paintings and prints; one of his most famous pieces “SELL THE HOUSE SELL THE CAR SELL THE KIDS” is in fact a quote from Francis Ford Coppola’s 1979 film Apocalypse Now. 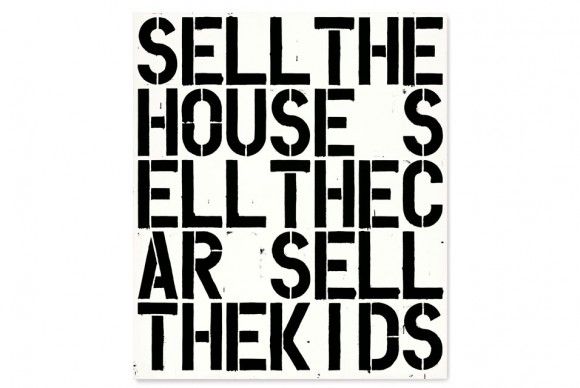 The framing of such works as abstract paintings is designed to question what the act of painting actually is, how it should be produced, and how an image can incorporate multiple layers of meaning that are slowly revealed as the viewer pays attention to the piece. He consciously breaks up the words and phrases on the canvas in a grid-like fashion that makes them harder to read, thus stripping the letters of their meaning in the vocable and forcing the viewer to see them as abstract shapes. In treating these letters and words as abstract shapes Wool does not subject them to conventional spacing or punctuation rules – they are fractured and letters are occasionally left out. Reading them for meaning can often be like putting together a puzzle making the experience like learning to read for the first time all over again. 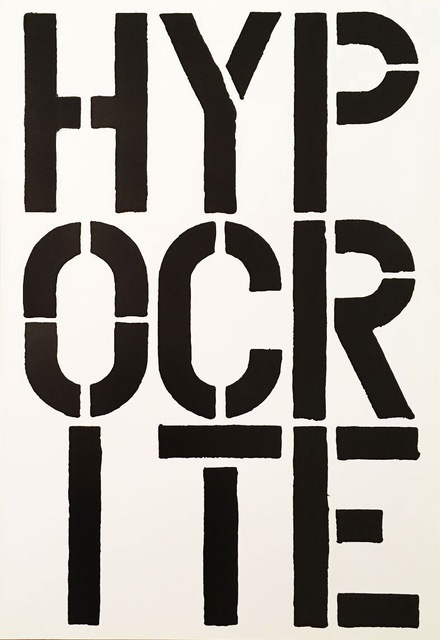 Text has long played a role in art in many different forms, Picasso and Braque used newspapers and books in their collages to add cultural references; Magritte, in works such as Ceci nest pas une pipe (1929) used words to show how irreconcilable words, images, and objects are and in doing so challenged the linguistic convention of identifying an image of something as the thing itself. This is a concept that was further explored by conceptual artists such as Jospeh Kosuth in his One and Three Chairs (1965) where he represents one chair three ways: as a physical chair, as a photograph of a chair and as a the dictionary definition of the word “chair.” Sol Lewitt and Lawrence Weiner are two other conceptual artists that delved into the purpose and use of words both as objects on paper as well as as means of communication. Many of their artworks need not be done by them as long as the creator complies with the written instructions they left, therefore playing with the idea of language serving as an art form. 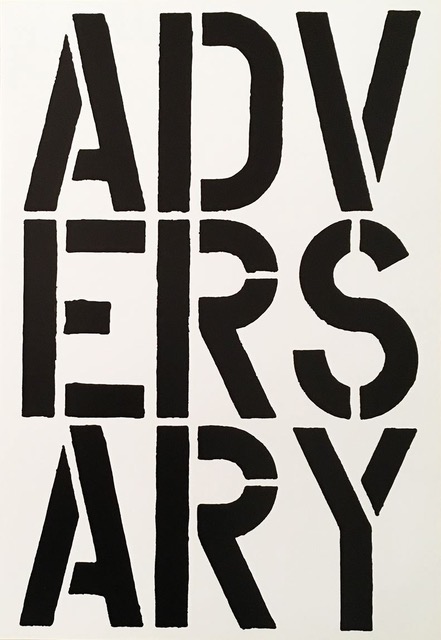 Wool was very much aware of the use of text and language in art in the past, yet his eureka moment came after seeing a delivery truck drive by on which someone had spray-painted SEX LUV (word which he reused on a 1987 work on paper). Since then he has been experimenting with the use of letters, words, and sentences, making them the subjects of his works. He had long been fascinated by the way words are transformed when exposed to the cacophony of the city. In graffiti, on billboards, in advertisements, words change in both form and function when they became a part of the urban landscape, they become devoid of their original intent and take on the purpose attributed to them by the person wielding the pen, brush or spray-can. 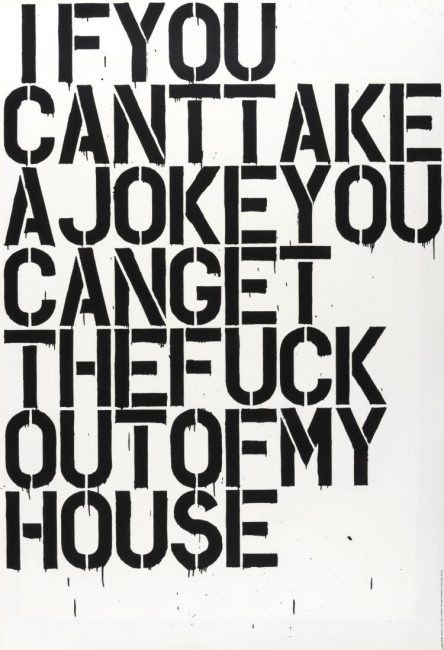 Whilst Wool’s word paintings echo Ed Ruscha’s word filled landscapes, or the more political works of Barbara Kruger and Jenny Holzer, it has been suggested that Wool makes a completely new use of language, by merging the anonymous aggression of stencils and graffiti with the dignity of formal abstract painting.

A selection of Christopher Wool’s text based screen prints are available for sale at Guy Hepner.