“I’ve painted since I have memory. I started painting before I started to walk. But I had never done it the way I’m doing it now” says cuban artist CB Hoyo, reflecting on how he has become so influential at the young age of 22. Hoyo, a self taught artist, takes the majority of his inspiration from his childhood, where early on he learned the significance of universal images. He grew up in a very international environment, resulting in his approach to creating universally understood images. Hoyo began creating playful images of mickey mouse, which he knew would resonate with many. With images and colors he can reach a much larger variety of people than with words. 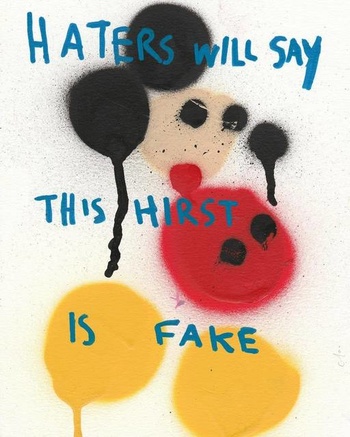 Hoyo’s art also takes a very satirical approach, poking fun at the seriousness many people often exert onto the value of art. He finds that once an artist has ‘made it’ everyone idolizes that artist, and anything the artist creates is taken as a masterpiece.

His latest collection is a series of artist influenced creations with quotes written on top poking fun at a collector’s views on what it means to own art. Some of his most popular creations include remakes of the most widely recognized images of artists Lichtenstein and Retina. Overtop he includes messily written quotes including “No one will notice this is fake” and “This Retna isn’t real but it still makes me look rich.” 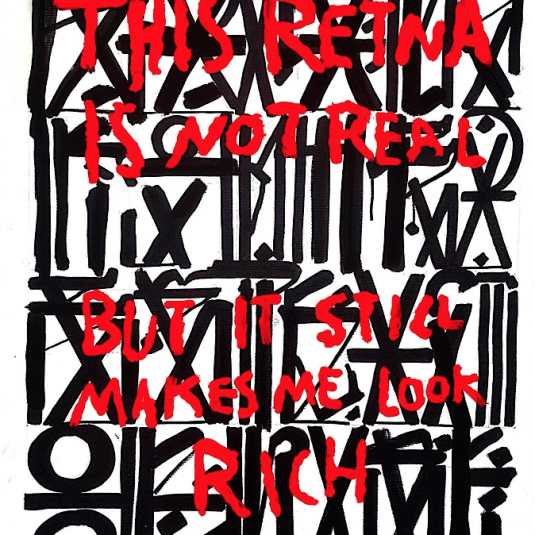 This series goes back to his whole idea of value being a man controlled concept. He also speaks on this in a series where he paints on dollar bills. To some, the dollar bill is still worth $1, but to those that value his art, the piece of paper becomes worth a lot more. 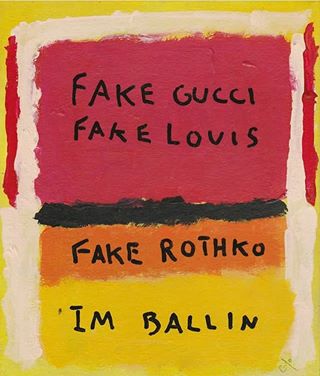 From the start of his career in the arts, Hoyo always kept a great balance between comedy and sharing his voice. Today, he has a large following of people from all walks of life, proving the mindset that art is both universal and personal. He hopes to continue down this path of being inspired by others, sharing his voice, and even collaborating with artists TMFA and John Paul Fauves.