For years, the suggestion that graffiti might be considered a valid art form has been received with splutters of indignation from the established art world and the public alike. Now, with auction houses aflutter at the prospect of bagging a work by elusive street artists, and celebrities among those eagerly queuing to pay tens of thousands of dollars for a piece, even the most entrenched critics are being forced to re-evaluate their position on the subject of that formerly dirty word.

Blek le Rat born Xavier Prou, (1952) was one of the first graffiti artists in Paris and has been described as the “Father of stencil graffiti”, undoubtedly an icon in the street art scene. Motivated by social consciousness and a desire to bring art to the people, Blek Le Rat’s political agenda is clear. And while parallels are drawn between his work and that of his British counterpart (Banksy), Le Rat’s identity is not a matter of national debate. 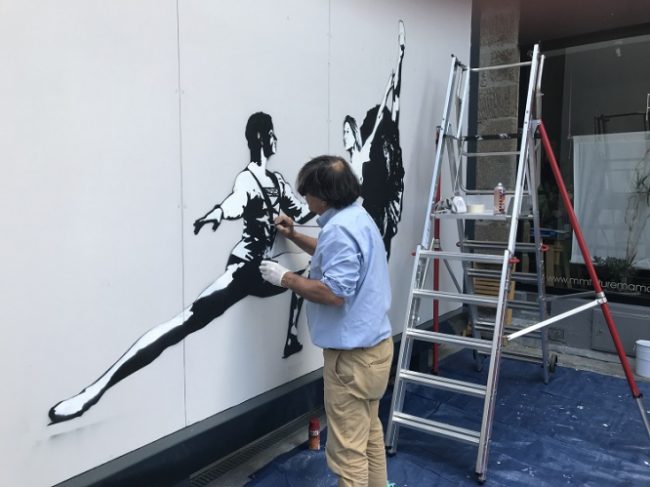 Blek was born into a “high bourgeois” district of Paris in 1952, the revered street artist fails to match almost any of the well-cultivated stereotypes involving Nike tracksuits and raging hormones. With a mild manner and unkempt locks, he would look more at home helping an elderly lady onto a bus than roaming the streets wielding a spray can. But then Blek is not one to fit comfortably into boxes. Prou’s parents – his father an architect, and his mother the daughter of a French consul in Thailand – insisted on living in one of the most bourgeois suburbs of Paris, Boulogne, and sending him to the best private school. “It wasn’t until the summer of 1968,” Prou explains, “that I met people from other backgrounds. Before that, I had never left my immediate area, let alone travelled to working-class districts”. That summer, aged 17, he left Boulogne to study etching, lithography and painting at Paris’s equivalent of the Royal Academy, L’Ecole Nationale Supérieure des Beaux-Arts, before taking a further degree, in architecture.

“At university,” he explains, “my teachers were Trotskyites, revolutionaries; they taught me much more than pure art. I was learning about another world. ” Studying architecture, he explains, taught him how to understand an urban landscape and how to see the space around him. This, combined with the “illumination” that came with discovering a new world of politics and sociological awareness, and his earlier studies in lithography and painting, made street art an obvious outlet for his talents: and so, in 1981, he began to combine his skills, to express his thoughts and create art for the masses.

Blek prefers to talk about urban art rather than “graffiti”. The latter term, he acknowledges, is bound with negative and misleading connotations. “My stencils are a present, introducing people to the world of art, loaded with a political message. This movement is the democratisation of art: if the people cannot come to the gallery, we bring the gallery to the people! ” Before tackling huge stencils such as those bearing his signature across cities worldwide, he laced the streets of Paris with what has become his signature piece, an oversized rat . “The rat is not just the only wild animal living in pretty much all cities, but within the word rat, there lies art. I like this anagram,” he smiles. “It is the shadow of a rat, not the actual beast,” Prou continues. “And these are placed to look as if they are taking over the city. For me, this idea has become quite an obsession. It is about the uprising, a signal of rebellion. It’s our revolution. “ 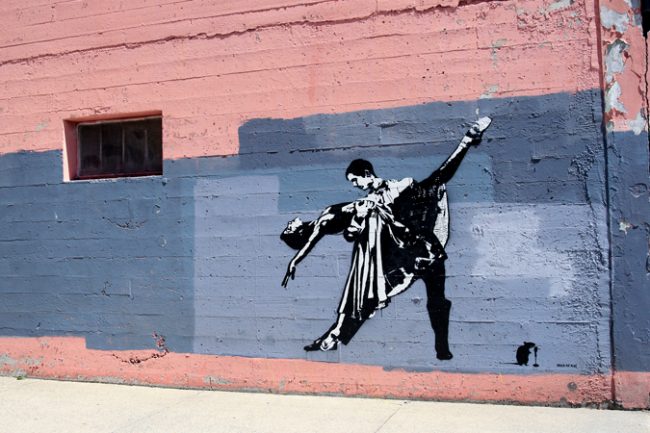 Charged with the political sentiment, his work often adopts dark humour. In 1984, as tensions preceding the fall of the Berlin Wall infiltrated the French capital, Blek was gathering his own ammunition. “That summer, everyone was so worried about Russian soldiers invading that there was a constant lookout for tanks. “As the streets lay empty at night,” he remembers, “I attacked the city with stencils of Russian soldiers, a message to the people when they returned: the Soviets have already arrived! I relieve paranoia through humour. ” It is the marriage of political commentary and humorous imagery that Banksy has adopted from Blek Le Rat, but Blek is equally grateful for what Banksy has done for urban art.

“It is important that people recognise what we do, and accept it for what it is,” he states. “It is art. Urban artists are forced to write on public property because there is a lack of space assigned to us. ” Would he limit himself to the legal territory if space were provided by councils? “Urban art is there to be inclusive. By bringing our work to the masses within the urban landscape, on the streets, we are including everyone. “

“So what we need,” he says with passion, “is allocated walls throughout the city, on which we can express ourselves. “Kids who would never go to a show see our work in the street and are inspired to express themselves through art rather than turning to vandalism or repressing their voices. “ 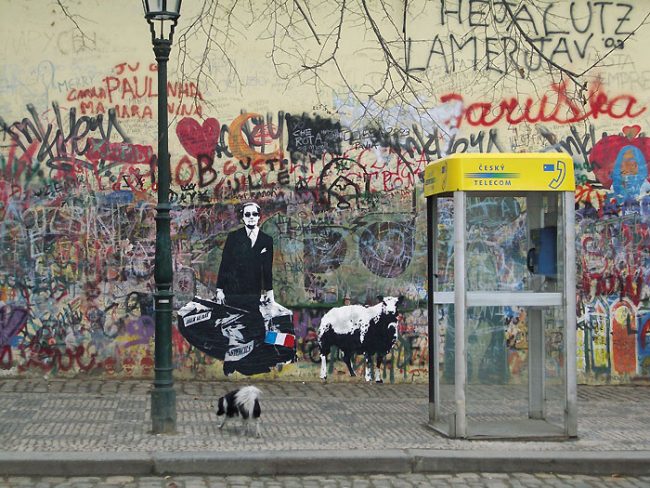 Blek’s commitment to his cause is clear, and yet until recently, graffiti was widely considered, at best, an inarticulate form of low-culture, at worst, the pastime of spotty teenagers intent on destruction.

But, as the Big 7-0 draws ever closer, does he ever wonder if he is getting too old for this lark? Never . “This movement,” he says, “is the single most important movement for the future of art. We can compare it to the rock’n’roll movement in the Sixties. It signifies a social change that is gathering momentum.

“Conceptual art is designed for those who understand the philosophy and the history of art, so it will always be exclusive. What we are doing is breaking down the walls. This movement is my life, and you are never too old to follow your passion. “