The Basquiat Estate recently released a print of Basquiat’s multi-panel collage, Phooey. Completed in 1982, this was produced during Basquiat’s era of experimenting with original drawings and repeated imagery. Phooey was created by collaging original drawings onto canvas in a period before moving on to photocopied versions of his illustrations. The piece features Basquiat’s iconic motifs. The crown and copyright symbol interlace patches of sporadic text and rough sketches. In the piece, the artist comments on the battle for resources, illusions of supremacy, and the role the human body plays in each.

Basquiat alludes to human necessities and resources throughout the collage. Most notably is petroleum. Adorned with the copyright symbol, Basquiat highlights the idea of ownership and entitlement that gets assigned to natural materials. Water and salt can also be seen scrawled through the images. It’s interesting to note that “hot water” and salt are included in smaller detail than water and petroleum. The idea of luxury over necessity can be attributed to how they’re sized, although the words’ repetition can show how they’ve all become integral to human life. 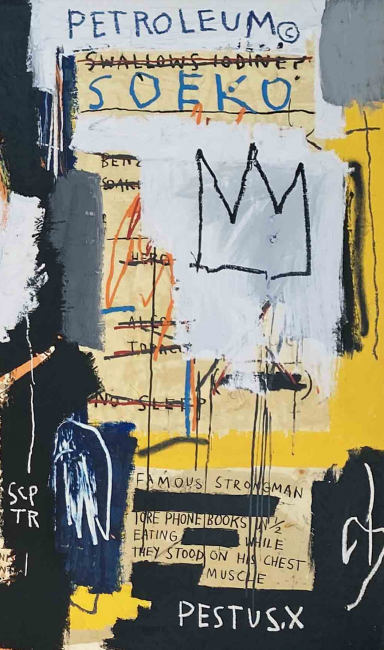 Like so much of Basquiat’s work, he includes figures of kings and worship. The figure in the bottom middle of the piece resembles a king with scepter, or even a Jesus figure in the image of Christ the Redeemer. Whichever revered figure, Basquiat minimizes their supremacy with crudely drawn genitals and an anatomical label, highlighting the sameness of all human beings. 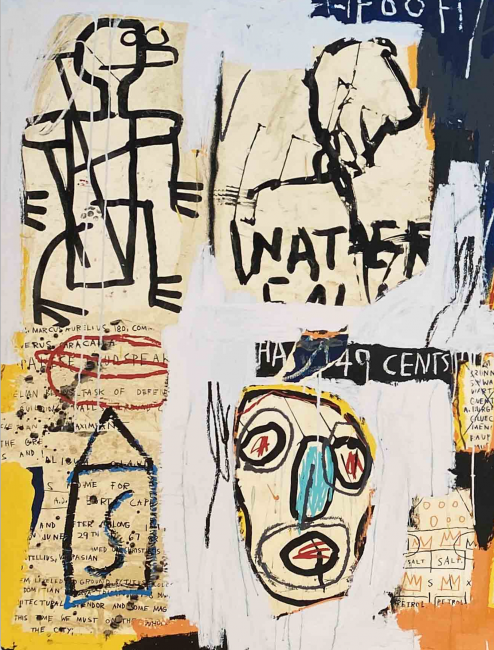 In a similar vein, Basquiat comments on the preciousness of human health and physical strength. A list of failed treatments or prescriptions can be found on the right side of the canvas. It’s followed by a quote that, throughout the redactions, reads, “Famous strongman tore phone books in 1/2 eating while they stood on his chest muscle.” Basquiat pairs a glimpse of suffering health with the idolization of peak physical shape. 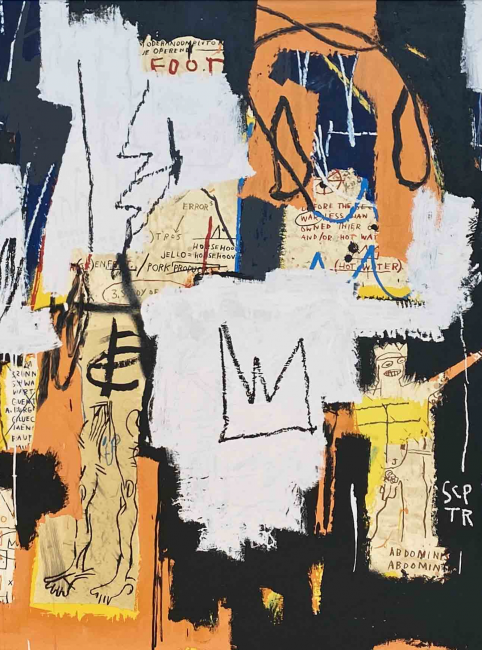 All together, Basquiat addresses how the hoarding of resources is weaponized to keep a population subdued. Phooey calls out a tension between ruling power and physical strength – each is threatened by the other. By doing so, he posits the question: which side would win if the playing field was level?