Basquiat and the Art of Empowerment

Basquiat and the Art of Empowerment

Acclaimed American artist Jean-Michel Basquiat is known for his graffiti-inspired works that combine dynamic animated imagery with poetic text. His career launched in New York City, by producing conceptual graffiti art under the pseudonym ‘SAMO’. Though brief, Basquiat’s career continues to excite and influence the global contemporary art world with his one-of-a-kind talent and unparalleled adoption of motifs. The symbols and text in his neo-expressionist works carry an abundance of significance and meaning, often conveying statements about social injustices. His work often scrutinizes themes of mortality, race, self identity and religion. Basquiat’s commentary aimed attention at marginalized communities throughout history, portraying topics like slavery and colonialism. Crowns, human bodies, boxers and skulls were frequent symbols used in his work, sometimes used to adorn those he admired with royalty, strength and power. 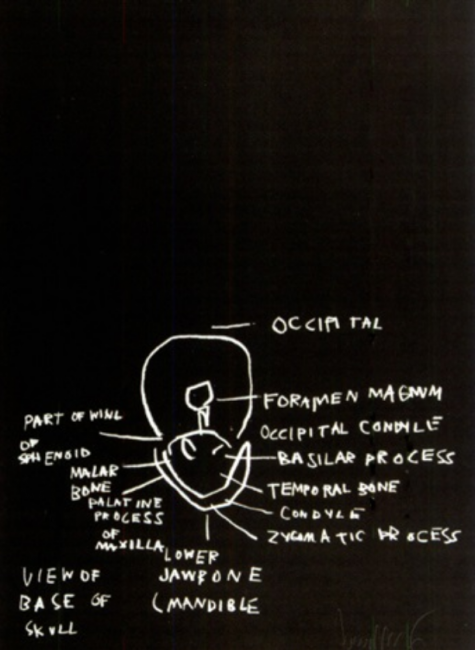 View of Base of Skull by Jean-Michel Basquiat

Influenced by Leonardo Da Vinci’s fascination with anatomy, Basquiat also depicted the human form, alluding to and referencing the excessive portrayals of the human body throughout Art History. Often working directly from Da Vinci’s sketches, Basquiat anatomically studied the human figure and its limitless possibilities in art. In 1982, Basquiat produced the series entitled “Anatomy” reflecting his curiosity with the physical makeup of the body with prints such as “Ligaments of the Elbow” and “View of Base of Skull”. These artworks exhibit specific body parts labeled and drawn in white, set against a black background, expressing the artist’s attention to detail and strong interest in combining text and imagery. 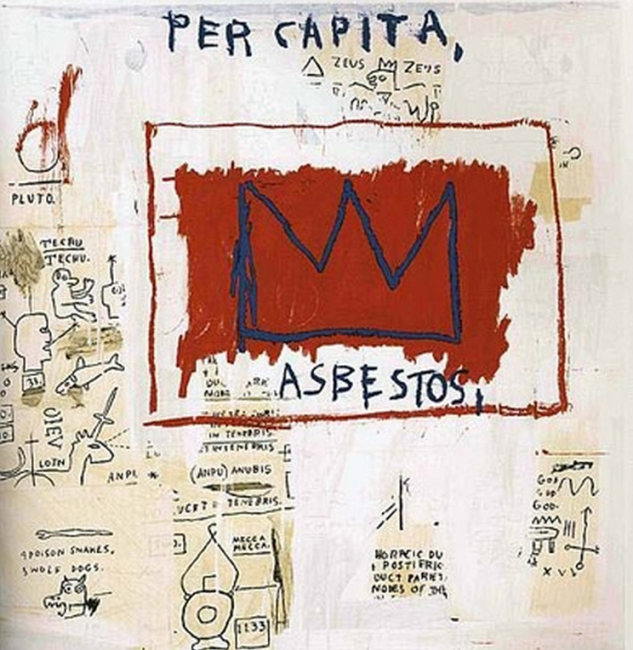 Many of Basquiat’s works juxtapose familiar and classic symbols with profound and serious social issues. The ‘crown’ is one of Basquiat’s most prominent and well-known motifs that appears throughout his works and has now developed into a pop-culture symbol. Whether on its own or sitting atop someone’s head, Basquiat’s crowns may suggest authority and royalty, perhaps responding to traditional European Art History. Basquiat constantly challenged Western histories by constructing and composing images that honored and depicted his African American heroes as Kings and Saints with crowns and halos. His vibrant and expressive portraits demonstrate issues surrounding identity and history. The three-peaked crown has topped the heads of Keith Haring and boxer Jack Johnson among many other figures Basquiat admired, as well as occasionally depicting himself wearing the crown in his self-portraits. The crown in his self-portraits may mirror and illustrate Basquiat’s ambition, determination, and persistence to grow and gain respect in the art community.

“Jean-Michel’s crown has three peaks, for his three royal lineages: the poet, the musician, the great boxing champion. Jean measured his skill against all he deemed strong, without prejudice as to their taste or age.” – Francesco Clemente 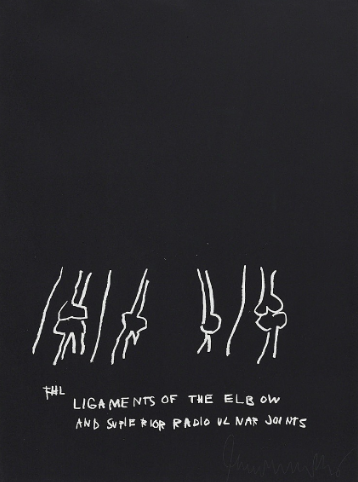 Ligaments of the Elbow by Jean-Michel Basquiat

Basquiat was drawn to African American athletes, especially boxers, frequently depicting them and celebrating their physical strength throughout his paintings. Boxers in his work are illuminated by their muscles, striking lines and expressive color palette. The work “Untitled” (Boxer) is one of Basquiat‘s most impressive and powerful images of a boxer, demonstrating his experimentation with proportions and can be interpreted as a symbolic self-portrait of Basquiat as a fighter. Furthermore, “Boxer Rebellion” illustrates two boxers with prominent anatomical features, therefore, linking to the artist’s fascination with the human form. The boxers are exchanging blows surrounded by text referencing boxing. 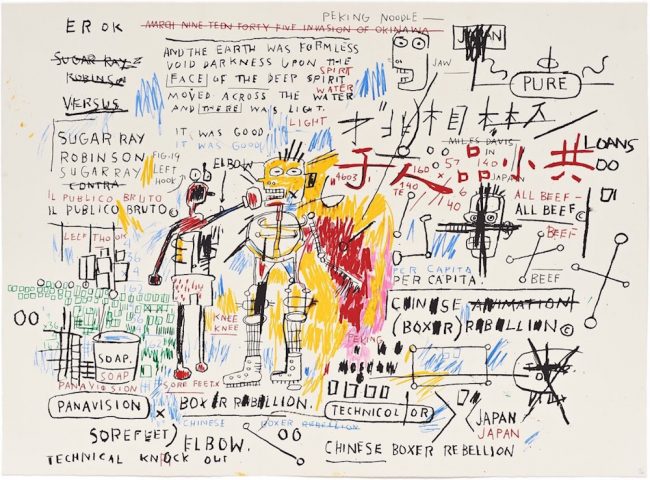 Basquiat‘s work exhibits how artists revived the human figure in their work throughout the 1980s. His ingenious and inventive artistic approach continues to inspire artists around the world and persists to raise crucial questions about power, race, religion, identity, and history. Basquiat examined themes and ideas through the use of symbol and text and adapted his experiences and environment into art without designated interpretations or narratives.