Released once in 2006 and again in 2017, Sale Ends Today replaces divine imagery with a retail sign 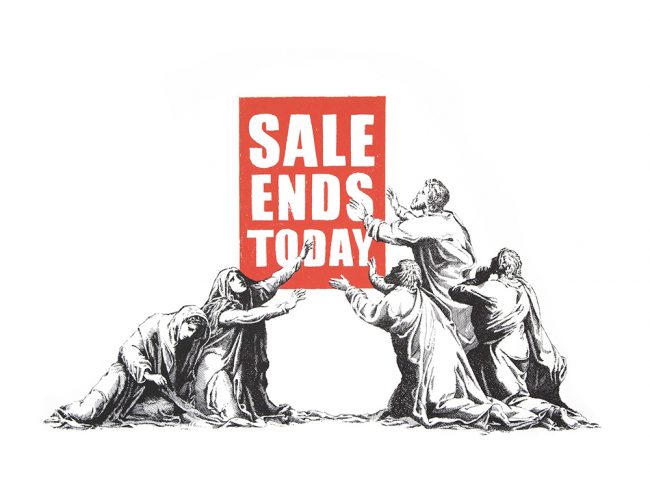 Banksy is known to critique consumerism and capitalist culture. In Sale Ends Today, he does so in his classic irreverent humor. The piece compares religious devotion to the new culture of consumption that he suggests has taken its place.

Created in 2006, Banksy portrays devout followers in Old Masterly style. The men and women resemble Catholic or Christian subjects as they have been portrayed throughout history, complete with veils and robes. However, where Christ would usually be getting worshiped, a retail advertisement sits instead. Banksy cleverly places urgency in salvation with the sign that reads, “Sales Ends Today”. A sale closing raises comparison to Jesus’ crucifixion, from the lamenting followers kneeling on the ground to their extended arms in worship 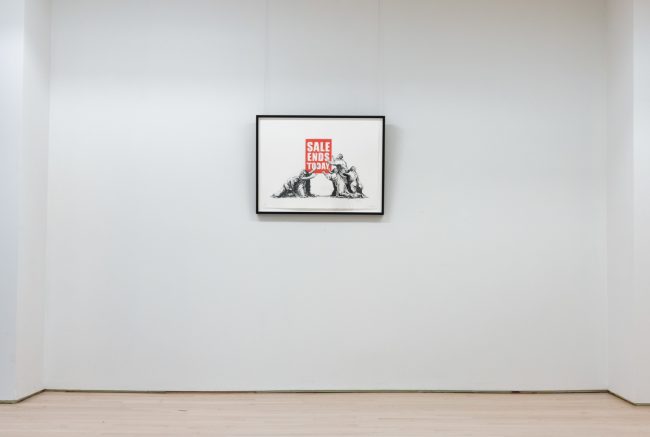 In Friedrich Nietzsche’s famed quote, he states, “God is dead…And we have killed him.” He continues, asking, “What sacred games shall we have to invent?” Banksy’s composition provides an answer to the question. Material and luxury gains have become a source of passion, conflict, and hope for modern society. In this way, Banksy suggests that religion and systems of belief have not been lost, but rather replaced. Products have taken on the role of answering prayers and changing lives. At the same time, this has come at the cost of many people’s lives and well-being.

In typical Banksy fashion, the print itself was released during Picture On Wall’s closing sale in 2017 after announcing they were being taken over by “venture anti-capitalists.” A select few of the remaining print editions were released, as well as 400 prints of Sale Ends which were a reworking of the original 2006 version.