Banksy’s Nola falls under a few aliases. Often called Umbrella Girl or Banksy New Orleans, the image first appeared in the vibrant Marigny district in 2008. Fourteen more murals were stenciled across the city, all as a response to the havoc wreaked by Hurricane Katrina in 2005.

While Banksy’s arrival in New Orleans was over three years after Katrina hit, the city was still in the depths of wreckage. Worst yet, his visit in August of 2008 coincided with the threat of yet another storm – Hurricane Gustav. It was here in the shadows of a distracted city that Banksy set off his ‘graffiti bomb’ across New Orleans. His murals invoked images of the previous storm’s destruction and (lack of) response. One such stencil is nicknamed “The Looters” and features military personnel filling a shopping cart with stolen items. Banksy’s murals entered the ongoing debates surrounding the federal government’s inadequate aid in the preparation and resulting damages of the storm. 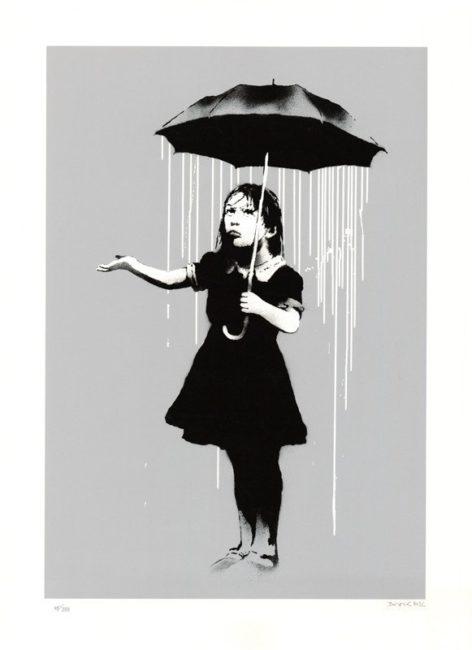 Umbrella Girl has become somewhat of a cultural zeitgeist to the city of New Orleans. It appears to be loosely based on the Morton Salt logo, featuring a girl in a collared dress holding an umbrella. The key difference is instead of shielding the child from the rain, the umbrella itself is the source of the downpour. Many see this as a symbol of the levee’s engineering flaws which lead to flooding around the city and was one of the most fatal effects of the storm. 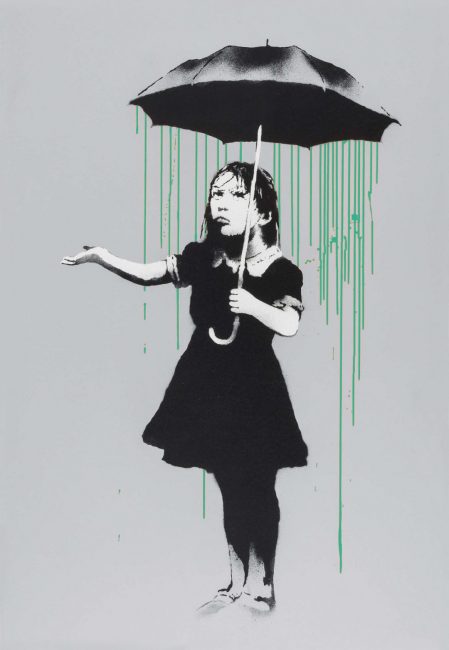 Later that year, Banksy released the first Nola signed print as part of a limited edition of 289. The seemingly random edition number was intentional as it referred to the age of the city at the time of the release. The original print featured white raindrops but went on to release in other color variations, including grey, green, yellow, and an Artist’s Proof edition with 6 multicolor rains. 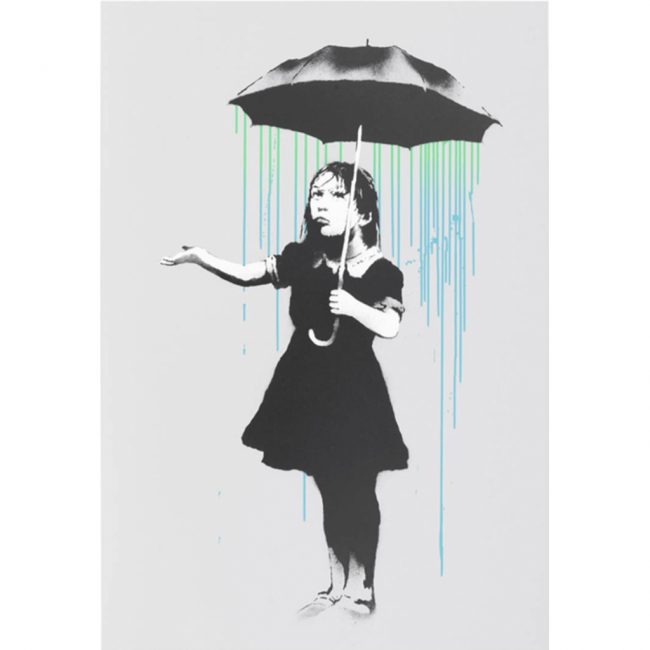 The original Umbrella Girl can still be found on the corner of Kerlerec and Rampart Street. It is one of three original murals remaining.