Banksy, Harland Miller and the use of British Humor in Art

Banksy, Harland Miller and the use of British Humor in Art

Text and image have been merged for decades, and now more than ever, the art world is dominated by text and narrative. By combining the two, Artists are able to interact and communicate with their audience in ways that are immediate, subtle and effective. British Artists, Banksy, and Harland Miller, cleverly employ text and powerful imagery in order to portray the absurdity of everyday life, drawing attention to their acclaimed satirical humor. While their approaches and social commentary remain hugely different, Banksy and Miller both illustrate the persuasive power of language which allows them to incorporate their British humor into their artworks. Both Artists highlight the fact that humor, when applied correctly, allows artists to not only make us laugh, but also alter our perspectives on the world. Wit and satire are some of the great traditions of British Culture, and these artists make no exception. 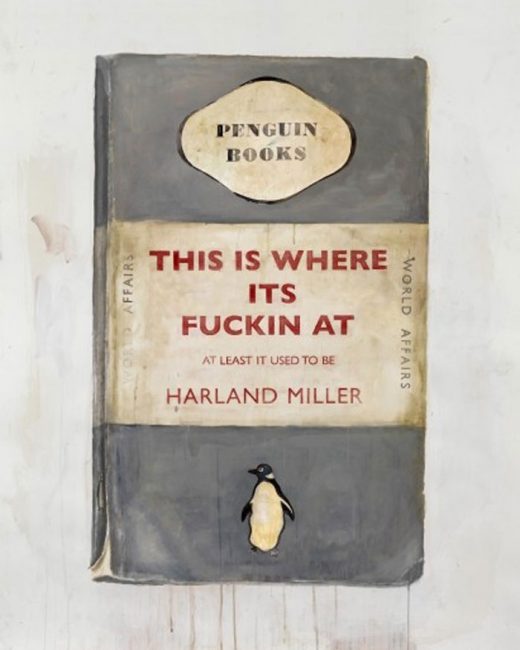 British artist and writer, Harland Miller, (1964-) is recognized for his large-scale photorealistic paintings, posters, and prints of vintage book covers, not to mention his immense contribution to the Abstract and Figurative Art movements of the 21st Century. Born in Yorkshire, UK, Miller earned his BA and MA in Art History from the Chelsea College of Art in London, UK. He is a critically acclaimed novelist in addition to an influential painter.  Miller’s practice delves into the intriguing relationship between words and images, and the process of generating meaning in his paintings, sculptures and mixed-media work. Fascinated by authors such as Edgar Allan Poe, and Ernest Hemingway, as well as drawing influence from Artists such as Mark Rothko and Ed Ruscha,  Miller blends text and images to comment and remark on social concerns, as well as focusing on the frequent disconnect between representation and reality. “There’s always been this compunction to write on pictures” Miller states.  Miller has lived and worked in New York, Berlin and Paris. Born in the North of England in 1964, Miller’s fondness for the drizzle and grimness of those northern towns remains a strong theme in his work. “I suppose mine is a very English sense of humor,” he says. 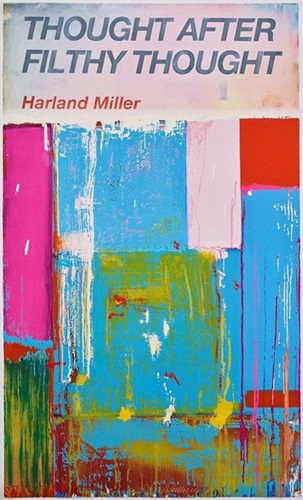 Furthermore, another Artist that adopts text and social commentary into their work is World-renowned British street Artist, Banksy. He rose to prominence for his provocative works in the late 1990s. His stencil graffiti is often controversial and politically themed. His early work was largely freehand, then in the late 1990s, Banksy began using stencils predominantly. His artwork is characterized by eye-catching, striking imagery often combined with slogans. Banksy’s work employs political themes, satirically criticizing concerns such as war, capitalism, hypocrisy, and greed. Common subjects include rats, policemen, and children. His worldwide fame has transformed his artwork from acts of vandalism to popular high art pieces.  Banksy’s work excites and influences many, for the blunt usage of messages within an art-form that was often regarded as existent only within the margins of society. “Girl with Balloon” is one of Banksy’s most notable works, demonstrating his brilliant and recognizable stencil technique.  The work depicts a young girl, reaching for, or releasing a heart-shaped balloon that has slipped from her grasp. Whether one sees the girl as losing the balloon, or about to catch it, the meaning can be interpreted as a loss of innocence or the arrival of hope. 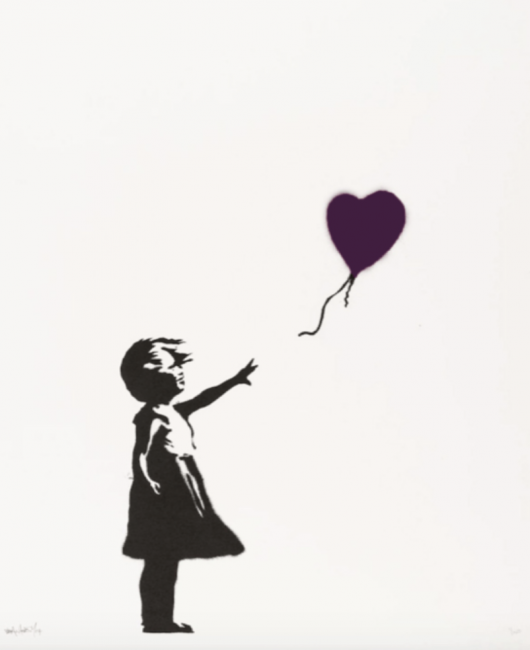 For over a decade, Harland Miller has been painting fictional covers for imaginary Penguin paperbacks based on the original color block covers that were used to denote genre. Common to all of these paintings is the basic structure of shape and a motif that implies a very British type of nostalgia. Miller turns this sentimentality back on itself, with the use of invented sardonic titles combined with the iconic Penguin logo that prove that you cannot judge a book by the cover. The tones are softened and his brushstrokes saturate his canvases with the frayed and shabby personality and character of a used book, yet the titles are also used to convey subversive socio-political critiques. His paintings bring laughter and amusement, similar to that of Banksy’s, and in Miller’s case, it is especially due to what Penguin book represents, or at least represented when people commonly read books in public. These were the classic books to be seen reading, or holding, which is why it is powerful and iconic that Miller turns them into things that cannot be read other than the brilliantly sarcastic titles. 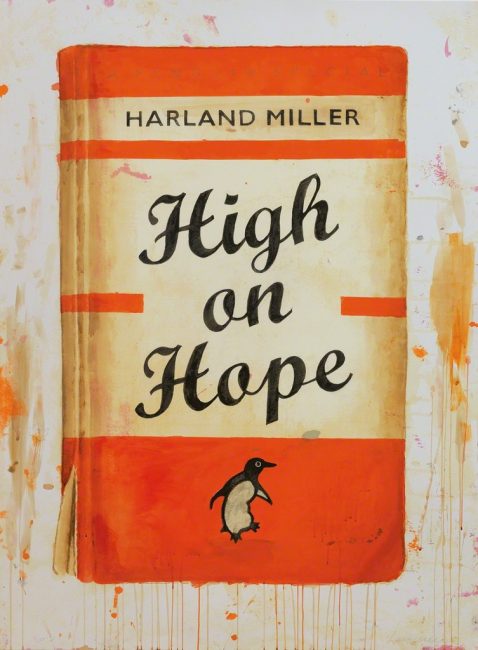 High on Hope by Harland Miller

We are in language culture, and despite the fact that there are more words than ever, statements are getting briefer and shorter, diminished to the length of a tweet. In this sense, Miller’s Art has been farsighted in its reliance on the word, by turning one-liner pieces into artforms in themselves.  Similarly, Banksy’s work is both comical and socially engaged and uses short phrases and iconic British humorous imagery in order to make light of concerns in contemporary society. 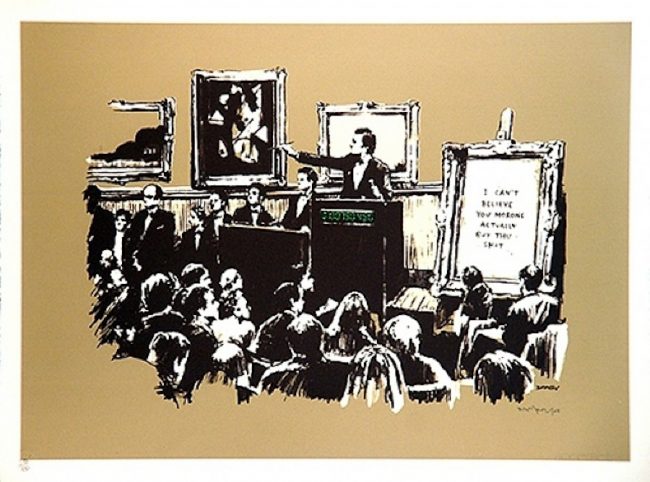