Although his identity remains a mystery, Banksy’s provocative stencils are among the most iconic and controversial images in Urban Art. He first ‘sprayed’ – or bombed – the walls of Bristol in the southwest of England in the early 1990s, but his fame soared after he moved to London in the early 2000s.

Despite what has been said, graffiti is not the lowest form of art. Although artists may have to creep about at night and lie to their families it’s actually one of the more honest art forms available. There is no elitism or hype, it exhibits on the best walls a town has to offer and nobody is put off by the price of admission. “A wall has always been the best place to publish work, “ (Banksy, Wall and Piece p.8) Even now, the people who run our cities don’t understand graffiti because they think nothing has the right to exist unless it makes a profit. They say graffiti frightens people and is symbolic of the decline of society but graffiti is only dangerous in the mind of three types of people : advertising executives, politicians and graffiti writers.

The people who truly deface neighborhoods according to Banksy are the companies that scrawl giant slogans across buildings and buses trying to make people feel inadequate unless they buy their products. Companies expect to be able to shout their message into people’s faces from every available surface but people are never allowed to answer back. The wall has changed that conversation and given people the choice to fight back, hitting the establishment with words and images. Some people become vandals because they want to make the world a better looking place, that ethos has since guided Banksy to leave his mark on cities around the world, from Barcelona to San Francisco. Believing any advertisement in public space that gives you no choice as to whether you see it or not belongs to the people, Banksy takes it, re-arranges it and re-uses it.

When he was eighteen, Banksy spent one night trying to paint “LATE AGAIN” in big silver bubble letters on the side of a passenger train. British transport police showed up and he got ripped to shreds running away through a thorny bush. The rest of his mates made it to the car and disappeared so he spent over an hour hidden under a tractor trailer truck with engine oil leaking all over him. As he lay there listening to the cops on the chase Banksy realized he had to cut his painting time in half or give up all together. He was staring up at the stenciled plate on the bottom of the fuel tank when he realised he could just copy that style and make each letter three feet high. Armed with knowledge, Banksy’s subsequent appearances such as the now famous Laugh Now stencil on the London District Line in 2002 took the artist a total of 20 minutes or less. 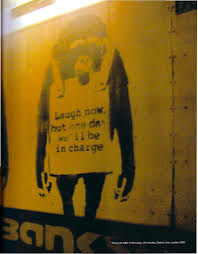 Banksy turned his experiences into great success : he has an Academy Award-nominated documentary (2010’s Exit Through The Gift Shop), a pop-up ‘bemusement park’ (Dismaland, created in 2015), a dystopian hotel (The Walled-Off Hotel in Bethlehem) and an auction record of $1.9 million. His collectors include celebrity actors, musicians and artists and now the British Museum, which in February 2019 added a fake banknote depicting Diana, Princess of Wales, to its collection of coins, medals and currency.

Banksy has been selling his art since the 1990s. Creating works for sale for more than 20 years aside his street art. The earliest commercial prints are from 2002, most notably Rude Copper that would later serve as a constant inspiration for Banksy. Ironically enough, policemen and security guards wear hats in London with a peak that comes down low over their eyes for psychological reasons. Apparently, eyebrows are very expressive and by covering them up you appear a lot more authoritative. The upside is this means it’s harder for cops to see anything more than six feet off the ground and makes painting rooftops and bridges a lot easier. 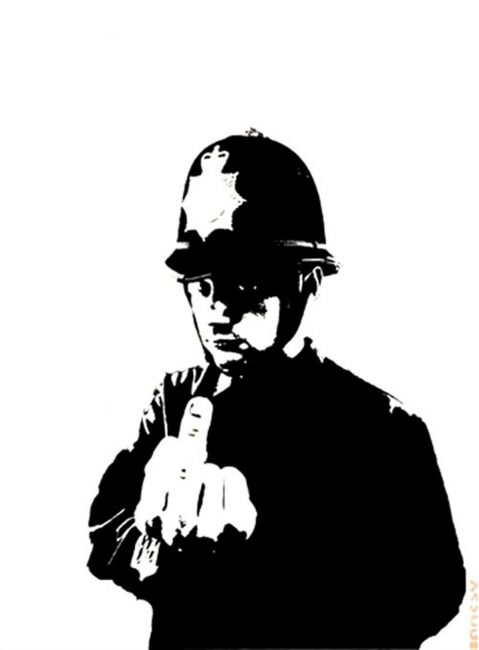 He didn’t create prints to make money and they were sold for such low prices. Regular people were buying the art on their credit cards as if it was a poster, with no awareness of its future value. It took a lot of guts to stand up anonymously in a western democracy and call for things no one else believes in through his art – like peace and justice and freedom – but Banksy continued to sell his work in many now-famous solo shows including Barely Legal in Los Angeles in 2006 and Banksy Versus Bristol Museum in 2009.

Banksy’s most sought-after graffiti editions, canvasses and sculptures are often directly inspired by his graffiti art and command the highest values on the international art market.

Girl with Balloon depicts a girl extending her hand towards a red heart-shaped balloon, and was originally a series of stencil murals first sprayed in London 2002. This one pictured is from London’s Southbank taken in 2004.

Editions of this iconic artwork are the most desirable Banksy pieces. The image of the Girl With The Red Balloon is synonymous with Banksy, but there are other variations in purple, blue, pink and gold, although these are extremely rare.

NOLA, also known as Umbrella Girl, first appeared in New Orleans in 2008. It was created in response to the devastating effects of Hurricane Katrina in 2005 and Hurricane Gustav in 2008. Editions with White Rain and Grey Rain were subsequently made for general release in a total edition of 352. Banksy also made a small number of artist’s proofs and ‘gifts’ with orange, yellow or multicoloured rain. 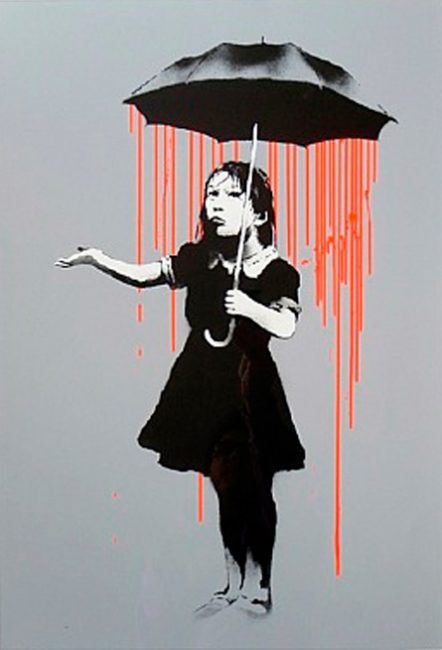 Banksy
NOLA (Orange Rain), 2006
Screen print
Edition of 32
22 x 30 in
56 x 76 cm
Signed and numbered by the artist
Accompanied by a certificate of authenticity from Pest Control

Banksy’s works featuring rats exist in many variations and with different slogans. Of rats, Banksy says, “They exist without permission. They are hated, hunted and persecuted. They live in quiet desperation amongst the filth. And yet they are capable of bringing entire civilizations to their knees. If you are dirty, insignificant and unloved then rats are the ultimate role model.” (Banksy Wall and Piece p. 95). Serving as agents of Banksy’s, helping to deliver the larger utopian message of his art, rats are a visual reminder to the viewer to imagine a world where graffiti wasn’t illegal; a city where everybody could draw whatever they liked; where every street was awash with a million colors and little phrases; where standing at a bus stop was never boring; a city that felt like a party where everyone was invited not just the estate agents and barons of big business. Banksy had been painting rats for three years before someone brought to his attention they were a clever anagram for art. Termed Banksus Militus Vandalus, they are a species impervious to all modern methods of pest control and mark their territory with a series of elaborate signs.Professor B. Langford of University College London states, “You can laugh now…but one day they may be in charge.”

Original Banksy graffiti art commands high prices and by the late 2000s, the art world had caught up with Banksy’s popular appeal, and many of his works had been removed from their original public settings and sold. Unless they had been removed prior due to sustained efforts of maintaining the peace. This was the case with the provocative portrait of Queen Victoria, most of which were cleaned off city street really quickly after being put up.

While Banksy has always wanted his street art pieces to remain in their original contexts, his graffiti art belongs to the owners of the building on which they are sprayed. The owners are thus able to expunge the work as vandalism, leave it as public art, or sell it at will. Since the 1990s, Banksy has ‘bombed’ cities across the UK, including London, Brighton and Bristol, as well as urban hotspots across America, Australia and Canada. He strikes with no prior warning, so the next ‘sprayed’ city or dwelling could be yours.

Banksy’s prints come in both unsigned and signed editions and a Pest Control certificate is essential. Unsigned prints are created in higher edition numbers. As a result, they are more affordable than their signed counterparts. Unsigned and signed artworks are equally legitimate — a certificate from Pest Control, Banksy’s ‘handling service’, is the proof of authenticity that you need. Likewise for edition canvasses that can either be tagged by the artist using spray paint and/or signed by hand or both.

Banksy had not made a new edition since Choose Your Weapon in 2010, until Sale Ends (v.2) was released from the Pictures on Walls closing down sale in 2017, a reworked version of Banksy’s original screenprint from his Barely Legal show in 2006. In order to remain relevant within larger fine art contexts, Banksy carries on painting over existing paintings that don’t belong to him. Known as crude oils, these unique paintings are now well into the million dollar range and many of which are rarely seen by the public as they have been and will likely remain in private collections.

After sticking up the picture I took five minutes to watch what happened next. A sea of people walked up, stared and moved on looking confused and slightly cheated. I felt like a true modern artist. (Banksy, Wall and Piece, p. 179.)

Unlike the Tesco Soup Can painting Banksy stuck on the wall of the Museum of Modern Art, New York that only lasted 6 days a handful of works are formally on view at institutions like Crimewatch UK Has Ruined The Countryside For All Of Us, 2003 after allegedly being snuck in by the artist that is now part of the Tate Gallery collection. This unique crude oil on canvas was created by the artist using an unsigned oil painting found in a London street market and then stenciling Police incident tape over the top. “It can be argued that defacing such idyllic scenes reflects the way nations have been vandalized by their obsession with crime and paedophilia, where any visit to a secluded beauty spot now feels like it may result in being molested or finding discarded body parts.” (Wall and Piece, p. 168).

The market for Banksy prints continues to thrive on the secondary gallery market despite attempts from auction houses to begin including his works more consistently within their sales. For Banksy, the art we look at is made by only a select few. A small group create, promote, purchase, exhibit and decide the success of art. Only a few hundred people in the world have any real say. When you go to an art gallery you are simply a tourist looking at the trophy cabinet of a few millionaires. With the exception of graffiti that has remained unspoiled by progress, photography has pretty much killed painting and transformed the sanctity of art. Through graffiti Banksy is calling for a return to tradition using images like Trolley Hunters as a vivid reminder of simpler times. 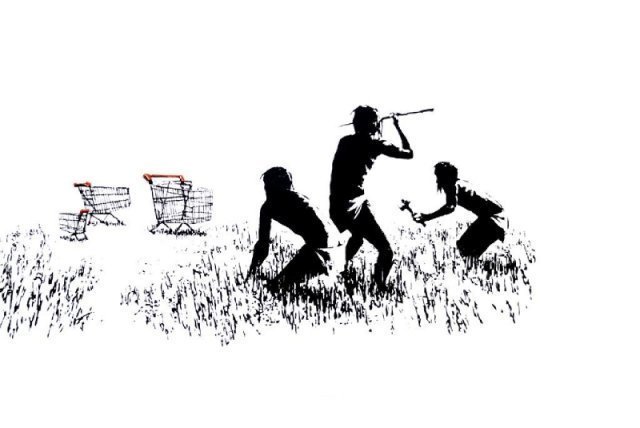 “People either love me or they hate me, or they don’t really care, “ Banksy says. Although the latter is coming in at a larger and larger cost by the day.